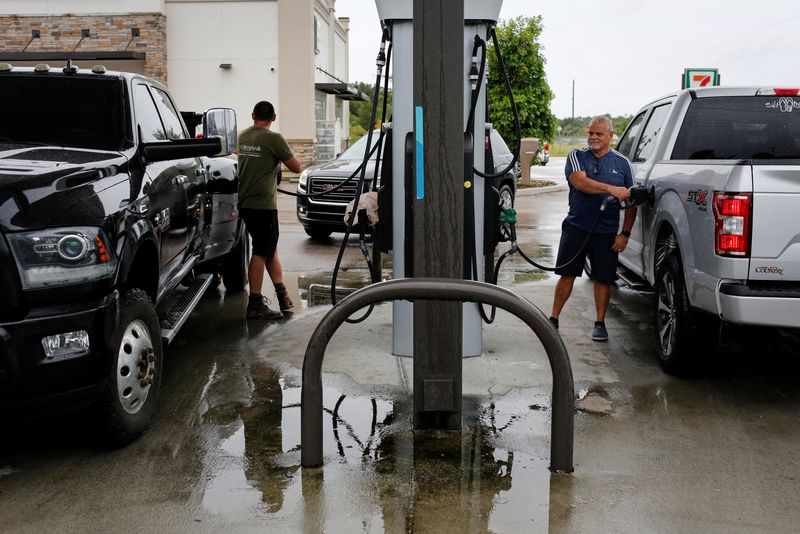 By Jarrett Renshaw and Sabrina Valle

WASHINGTON (Reuters) -Top White House officials met on Friday with oil executives to discuss Hurricane Ian and low gasoline inventories as President Joe Biden warned the industry not to price-gouge consumers, according to two sources familiar with the matter.

Retail gasoline prices have spiked after a series of unplanned outages at refineries and scheduled maintenance at other plants combined to tighten supply.

The retail average of $3.79 a gallon is 11 cents higher than a week ago, according to AAA, though overall prices remain lower than a month ago.

Biden warned oil companies not to use the storm as a pretext to raise gasoline prices, which spiked earlier this year after Russia’s invasion of Ukraine.

“This small, temporary storm impact on oil production provides no excuse for price increases at the pump, none,” he said.

Hurricane Ian brought devastation to Florida on Thursday and was battering South Carolina on Friday, while Hurricane Fiona took a heavy toll on Puerto Rico earlier in the month.

Prices have risen the most in the Midwest and West Coast after a fire at BP (NYSE:) Plc’s Toledo, Ohio, refinery and four different California refineries either shut for planned work or took units offline unexpectedly.

Refiners and retailers throughout California are allowed to immediately sell winter-blend fuel, the state’s air pollution regulator said on Friday, a move to reduce its highest in the nation fuel prices. California average price is $6.35 per gallon, compared to $3.80 nationally. The blend normally is sold across the state until Oct. 31.

Tight refining supply has caused the gap between wholesale gasoline futures and retail prices to widen this year. It currently sits at about $1.30 a gallon, compared with an average of 88 cents over the past five years.

U.S. producers Exxon and Chevron declined to comment on the White House meeting.

In a separate statement, Chevron said it “has zero tolerance for unlawful price gouging” and that it has reminded its independently owned distributors to adhere to price gouging laws activated as part of the Hurricane Ian response.

In a letter to the Energy Department, Exxon this week pushed back against reductions of U.S. fuel exports urged by the Biden administration in August, arguing that restricting shipments would further squeeze global supplies and lift pump prices at home.

“This week’s letter from a company that made nearly $200 million in profit every single day last quarter misreads the moment we are in,” Granholm said in a statement. “This is a time for American energy companies to take action to lower prices for consumers and to rebuild inventories of gasoline and diesel in this country that are below the five-year range.”

No matter who is to blame, gas prices continue to rise – Daily Leader