Crude Tanker Rates Could Reach a Jaw-Dropping $200,000 a Day


The Russian invasion of Ukraine that began on Feb. 24 continues, with casualties mounting on both sides.

Ukrainian forces are putting up resistance using Western military aid, and President Volodymyr Zelenskyy regularly calls on the world to do more to help. Governments around the globe have imposed heavy sanctions against Moscow but have stopped short of direct intervention for fear of sparking a wider conflict.

For all our coverage, visit our Ukraine war page.

All my friends are gone: A young Ukrainian in Kharkiv

Note: Nikkei Asia decided on March 5 to temporarily suspend its reporting from Russia until further information becomes available regarding the scope of the revised criminal code. Entries include material from wire services and other sources.

Here are the latest developments:

Grossi says in a news release these incidents show why the IAEA must be able to send a mission to the plant “very soon” to “reduce the risk of a severe nuclear accident” in Europe.

“I’m continuing to consult very actively and intensively with all parties,” he says. “The mission is expected to take place within the next few days if ongoing negotiations succeed.”

“The board and management of Yandex have concluded that the interests of the company’s stakeholders, including its Class A shareholders, are best served by pursuing the strategic exit from its media businesses (other than entertainment streaming),” Yandex says in a statement.

Once known as “Russia’s Google,” Yandex says ya.ru will become its main page and portal for search, e-mail and other non-media services. A new application for Android called Yandex with Alice will also be launched, the company says. Poland’s President Andrzej Duda, left, pictured in May with Ukraine’s President Volodymyr Zelenskiy, has arrived in Kyiv to discuss providing more support. The pair have met five times this year.

5:30 p.m. Polish President Andrzej Duda has arrived in Kyiv to discuss further support for Ukraine, including military aid, his office said, as Russia’s invasion of the country approaches the six-month milestone. Warsaw is one of Kyiv’s strongest supporters and nearly 6m Ukrainian refugees have crossed the border into Poland since Russia invaded their country on Feb. 24. Poland, a NATO and European Union member, has often criticized some other EU nations for not doing more to help Ukraine. Duda has met Ukrainian President Volodymyr Zelenskyy five times this year, including on three visits he has made to Ukraine since the start of the invasion.

12:30 a.m. The Japanese government says it will maintain sanctions on Russia while working in tandem with other Group of Seven nations as the war in Ukraine is set to enter its seventh month. Prime Minister Fumio Kishida, who virtually attended a meeting of ministers and senior ministry officials, directed attendees to craft measures to address rising energy prices. Foreign Minister Yoshimasa Hayashi told reporters afterward that Kishida, who has COVID, also asked him to continue Japan’s “diplomatic responses,” including imposing sanctions, while also ensuring the safety of Japanese nationals in Russia and Ukraine. Japan and other G-7 nations have frozen the assets of President Vladimir Putin, excluded some big Russian lenders from a key international payment network and imposed other sanctions since the war began. Freight train wagons in the Black Sea port of Odessa: “We have information that Russia is stepping up efforts to launch strikes against Ukraine’s civilian infrastructure,” a U.S. official says. 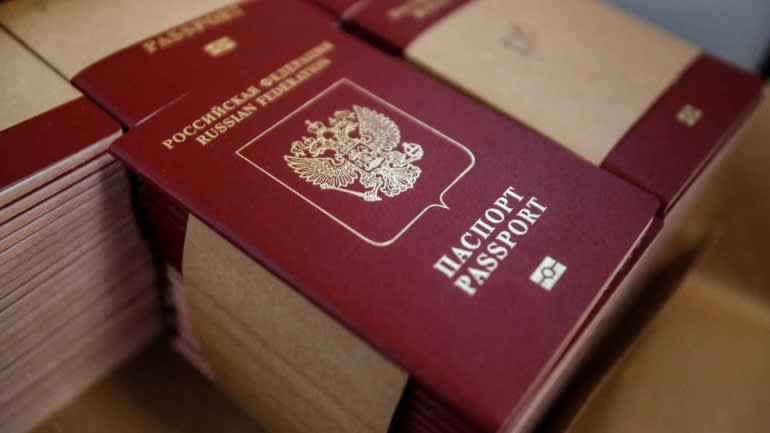 Blank Russian passports are seen at a Moscow printing factory.

4:49 a.m. The U.S. rejects Ukraine’s demand for a blanket visa ban on Russians, saying Washington does not want to close off paths to refuge for Russia’s dissidents and others vulnerable to human rights abuses.

Ukrainian President Volodymyr Zelenskyy first urged the visa ban in a Washington Post interview this month, saying Russians should “live in their own world until they change their philosophy.” He issued another call a few weeks ago for EU states to ban visas for Russian nationals.

1:15 a.m. Russia’s security service has accused a Ukrainian woman of being the prime suspect in the car bombing that killed the daughter of a prominent Russian nationalist thinker on Saturday.

The Federal Security Service says the woman arrived in Russia with her young daughter last month, changing license plates multiple times to avoid detection. After the bombing, she drove to Estonia, according to the FSB.

Ukraine has denied involvement in the blast that killed Darya Dugina, whom Russian President Vladimir Putin called a patriot after her death. 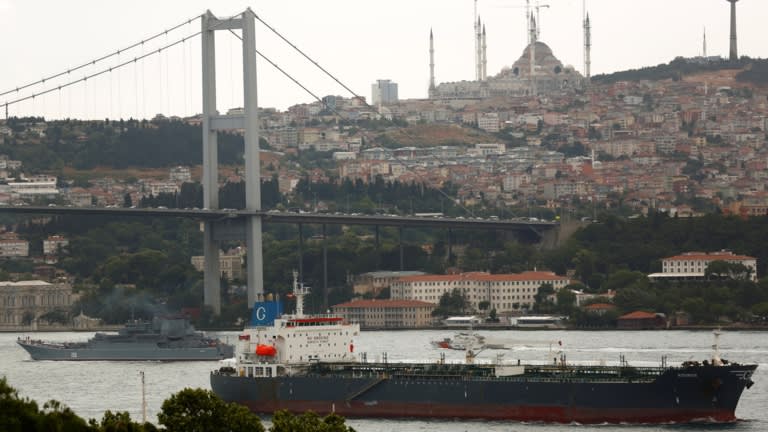 The Russian Navy landing ship Yamal, left, passes the Liberian-flagged oil tanker Kouros on its way to the Black Sea in Istanbul in June 2016.

As the war nears the six-month mark, the United Nations says 5,587 civilians have been killed in Ukraine as of Sunday. A Ukrainian general says nearly 9,000 soldiers have died in action.

“To forbid the entrance to all Russians is not a good idea,” Borrell says Monday. “We have to be more selective.”

Finland, Estonia and the Czech Republic are among the countries urging the ban on new tourist visas as punishment for Moscow’s war against Ukraine. Some EU states unilaterally suspended visas for Russians, but say Russians enter their territory using visas issued by other EU countries, under the Schengen rules.

5:30 p.m. Oil majors such as ExxonMobil and Chevron will have to cut exports of Kazakh oil via Russia again due to damaged equipment, the pipeline operator says, adding to energy supply disruptions from Russia to the West. CPC, which ships oil from Kazakhstan via Russia to global markets and handles about 1% of global oil, said oil exports from two of its three mooring points at a Black Sea terminal had been suspended. It said loadings were only being processed from SPM-3, while SPM-1 and SPM-2 were out of service. Oil loading requests will therefore have to be reduced, it said.

3:00 p.m. Turkey doubled its imports of Russian oil this year, Refinitiv Eikon data shows. Trade between Turkey and Russia has been booming since spring as Turkish companies not banned from dealing with Russian counterparts stepped in to fill the void created by EU businesses leaving Russia after its invasion of Ukraine. Turkey increased oil imports from Russia — including Urals and Siberian Light grades — beyond 200,000 barrels per day so far this year compared with just 98,000 bpd for the same period of 2021, Refinitiv data showed.

1:50 p.m. Germany has a good chance of getting through the coming winter without taking drastic measures but faces a difficult time and must prepare for Russia to tighten gas supplies further, Economy Minister Robert Habeck says. “We still have a very critical winter ahead of us. We have to expect that [Russian President Vladimir] Putin will further reduce the gas,” Habeck told German broadcaster ARD from Canada, where he is on a three-day trip with Chancellor Olaf Scholz.

3:24 a.m. Russian missiles hit targets near the city of Odesa, a Ukrainian Black Sea port and grain export hub, as the war heads for the six-month milestone on Wednesday. Local authorities say Ukrainian defenses shot down two of the cruise missiles while three hit agricultural targets, but there were no casualties.

Aug. 24 also will mark 31 years of Ukraine’s independence from Soviet rule, and President Volodymyr Zelenskyy calls for vigilance in a nightly video address, saying Moscow could try “something particularly ugly.”

Meanwhile, artillery shells rain down overnight on Nikopol, a city lying across the Dnieper River from the Zaporizhzhia nuclear plant, cutting power to 3,000 residents and spurring fears of a nuclear accident. 2:00 a.m. Russian authorities are investigating a suspected car bomb attack outside Moscow that killed the daughter of Alexander Dugin, an ultranationalist ideologue who advocates Russia absorbing Ukraine. Investigators say they are considering “all versions” when it comes to establishing who was responsible for Darya Dugina’s death, while Russia’s Foreign Ministry speculates of a link to Ukraine, which Kyiv denies.

“I confirm that Ukraine, of course, had nothing to do with this because we are not a criminal state, like the Russian Federation, and, moreover, we are not a terrorist state,” Ukrainian presidential adviser Mykhailo Podolyak says. Read more.

10:00 p.m. Singapore Prime Minister Lee Hsien Loong says tensions between the United States and China and the Russia-Ukraine war affect Asia-Pacific security. “We can expect more geopolitical contestation in the Asia-Pacific,” he said, adding that Singapore would try its best to avoid being caught up in the “major power rivalry.” Worsening U.S.-China relations are making it “almost impossible” to work together on pressing global issues like climate change, pandemics and nuclear proliferation, he said, speaking at the city-state’s national day rally.

4:45 a.m. Russia shot down Ukrainian drones in Crimea, while Ukrainian officials said Russian forces pressed ahead with efforts to seize one of the few cities in eastern Ukraine not already under their control, The Associated Press reports.

In Crimea, which Russia annexed from Ukraine in 2014, Russian authorities say local air defenses shot down a drone above the headquarters of the Russian Black Sea Fleet in Sevastopol. It was the second drone incident at the headquarters in three weeks and followed explosions at a Russian airfield and ammunition depot on the peninsula this month.

Crude Tanker Rates Could Reach a Jaw-Dropping $200,000 a Day

Seniors getting shaft on COVID; Trump vs. Biden