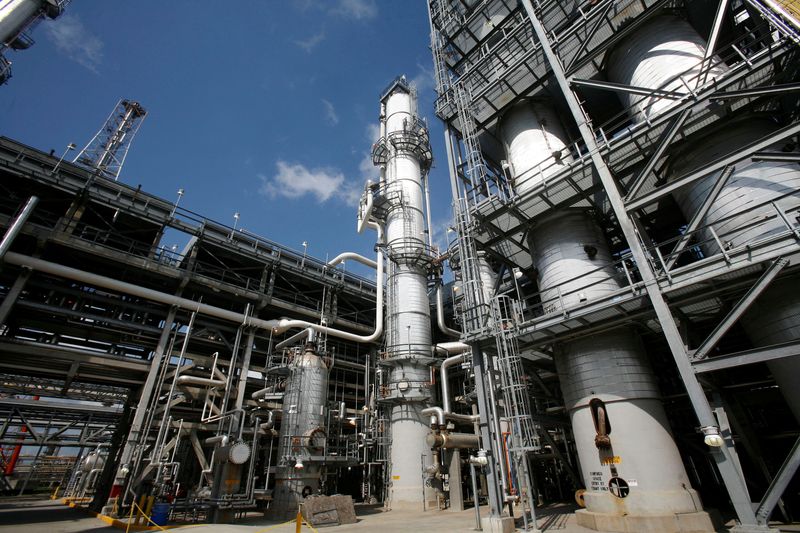 © Reuters. FILE PHOTO: The Valero St. Charles oil refinery is seen during a tour of the refinery in Norco, Louisiana August 15, 2008. REUTERS/Shannon Stapleton

HOUSTON (Reuters) – U.S. oil refiners that once were regular buyers of Venezuelan crude are jockeying to win access to coming cargoes chartered by Chevron Corp (NYSE:) under a newly issued U.S. license, two people familiar with the matter said.

The Biden administration last week authorized Chevron to expand operations in Venezuela and resume taking prized heavy crude to the United States. It was first easing in more than three years of a U.S. ban on imports from the South American nation. A further relaxation may follow if Caracas and opposition leaders agree on terms of a presidential election, Washington has said.

Valero Energy Corp (NYSE:), PBF Energy (NYSE:) and Citgo Petroleum have shown interest in getting access to the oil Chevron is expecting in coming weeks, according to the people.

Valero, PBF and PDVSA did not reply to requests for comment. A Chevron spokesperson said it does not comment on commercial matters. A spokesperson for Citgo declined to comment.

Venezuelan heavy crude grades, popular among U.S. refiners for producing products from asphalt to motor fuels, had been partially replaced by Russian supplies in the aftermath of sanctions on Venezuela.

Some of these companies this week began contacting Chevron, shipping agencies and vessel owners to check timetables, the sources added. No Venezuelan oil officially has been allocated to Chevron yet and no chartering contracts have been signed to transport cargoes to the United States, according to Venezuelan export schedules and Refinitiv freight data.

The most recent chartering contracts to transport Venezuelan oil to the U.S. Gulf Coast are from late 2018, right before sanctions, the Refinitiv data showed.

Valero, PBF and other U.S. independent refiners would not need any new authorization to buy Venezuelan oil from Chevron. But Citgo, owned by Venezuela’s PDVSA, may require clearance from the U.S. Treasury Department since it operates under a license, analysts and experts said.

Chevron could prioritize its own refineries, especially Pascagoula, Mississippi, and El Segundo, California, which were regular receivers of Venezuela oil in the past.

On Thursday, Chevron CEO Michael Wirth said the company is not likely to add investment to boost Venezuela’s output in the next six months as the sanctions framework will take time to be eased. The primary effect will be to allow some Venezuelan oil to flow back to the United States, “which will help the U.S. refining system,” Wirth said.

A total lifting of sanctions is unlikely in the near term, said analysts, but Venezuela’s former customers, its business partners and creditors are taking steps to collect pending debts in the wake of the Chevron authorization. Washington has not signaled it would authorize other companies to collect on those debts.

Because spring and summer in the United States are the most active seasons for asphalt paving and peak driving, Venezuela’s heavy Boscan crude produced by Chevron and PDVSA at their Petroboscan project could be the first exported.

A glut of Boscan crude in storage earlier this year forced a total shutdown of its processing. Draining those stocks must come first to restart output, PDVSA documents showed.

There are separate stocks of Hamaca oil and diluted crude for immediate export at the nation’s largest terminal. But as of Nov. 29, there were only 1.47 million barrels available, enough for only two cargoes, according to the PDVSA documents.

Petropiar’s crude upgrader, operated by PDVSA and Chevron, was halted last week over a naphtha leak. It restarted days later to produce about 100,000 barrels per day of Hamaca.

In November, PDVSA sent 1.2 million barrels of Hamaca to its refineries for processing. About 1 million barrels of fuel oil were also shipped from Petropiar to Iran’s state firm Naftiran Intertrade Co LTD (NICO) as part of an oil swap, the documents showed.