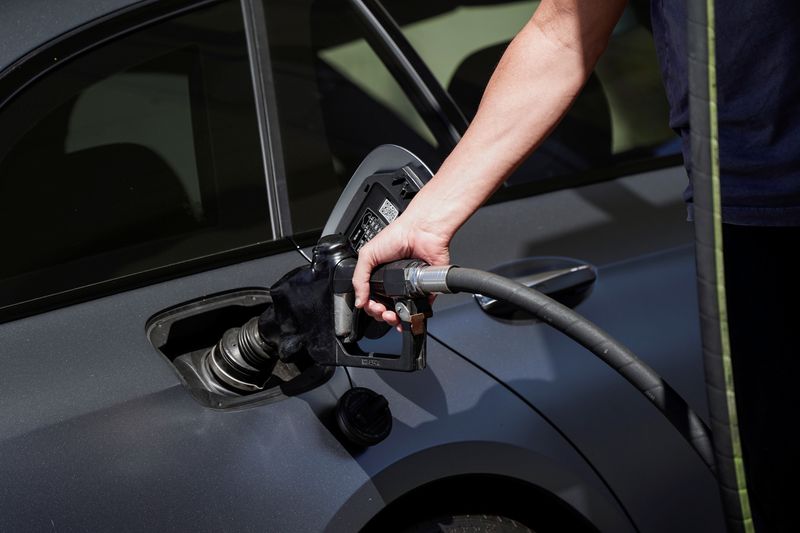 (Reuters) -The price of U.S. gasoline averaged more than $5 a gallon for the first time on Saturday, data from the AAA showed, extending a surge in fuel costs that is driving rising inflation.

The national average price for regular unleaded gas rose to $5.004 a gallon on June 11 from $4.986 a day earlier, AAA data showed.

High gasoline prices are a headache for President Joe Biden and congressional Democrats as they struggle to maintain their slim control of Congress with midterm elections coming up in November.

Biden has pulled on numerous levers to try to lower prices, including a record release of barrels from U.S. strategic reserves, waivers on rules for producing summer gasoline, and leaning on major OPEC countries to boost output.

Yet fuel prices have been surging around the world due to a combination of rebounding demand, sanctions on oil producer Russia after its invasion of Ukraine and a squeeze on refining capacity.

DEMAND DESTRUCTIONU.S. road travel, however, has remained relatively strong, just a couple of percentage points below pre-pandemic levels, even as prices have risen.

Still, economists expect demand may start to decline if prices remain above $5 a barrel for a sustained period.

“The $5 level is where we could see very heavy amounts of gasoline demand destruction,” said Reid L’Anson, senior economist at Kpler.

Adjusting for inflation, the U.S. gasoline average is still approximately 8% below June 2008 highs around $5.41 a gallon, according to U.S. Energy Department figures.

Consumer spending has so far remained resilient even with inflation running at its highest level in more than four decades, with household balance sheets shored up by pandemic relief programs and a tight job market that has fueled strong wage gains, especially for lower-income workers.

Gasoline product supplied, a proxy for demand, was 9.2 million barrels per day last week, according to the U.S. Energy Information Administration, broadly in line with five-year seasonal averages.

The high prices for drivers come as major oil-and-gas companies post bumper profits. Shell (LON:) reported a record quarter in May and Chevron Corp (NYSE:) and BP (NYSE:) have posted their best numbers in a decade.

Other majors, including Exxon Mobil (NYSE:) and TotalEnergies, as well as U.S. independent shale operators, reported strong figures that have spurred share repurchases and dividend investments.

Numerous companies have said they will avoid excessive investment to boost output due to investors’ desires to hold the line on spending, rather than respond to $100-plus barrel prices that have persisted for months.

Refiners have been struggling to rebuild inventories which have dwindled, especially on the U.S. East Coast, reflecting exports to Europe where buyers are weaning themselves off of Russian oil.

Currently, refiners are utilizing about 94% of their capacity, but overall U.S. refining capacity has fallen, with at least five oil-processing plants shutting during the pandemic.

That has left the United States structurally short of refining capacity for the first time in decades, analysts said.

The US dollar and oil prices are breaking from their historical trade link. An

Calls for ‘post-ESG’ voice that focuses on excellence instead