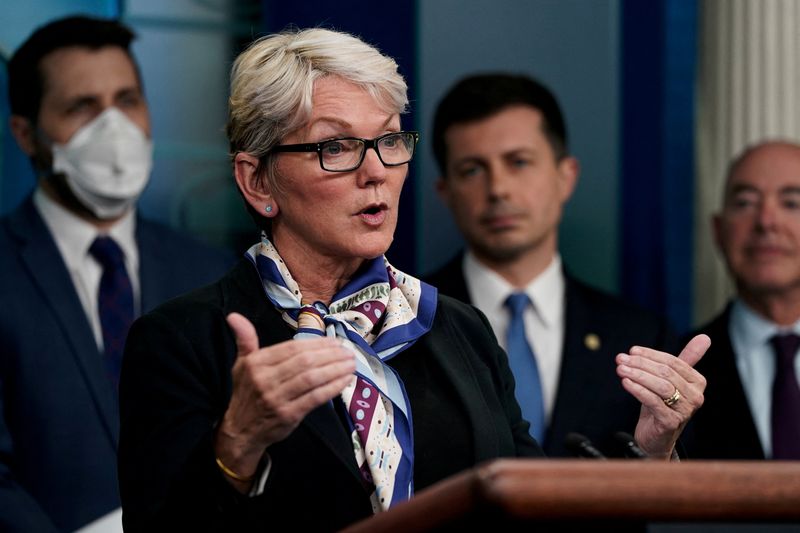 © Reuters. FILE PHOTO: U.S. Secretary of Energy Jennifer Granholm speaks during a briefing about the bipartisan infrastructure law at the White House in Washington, U.S., May 16, 2022. REUTERS/Elizabeth Frantz/File Photo

WASHINGTON (Reuters) – The U.S. Energy Secretary urged domestic oil refiners this month to not further increase exports of fuels like gasoline and diesel, adding that the Biden administration may need to consider taking action if the plants do not build inventories.

“Given the historic level of U.S. refined product exports, I again urge you to focus in the near term on building inventories in the United States, rather than selling down current stocks and further increasing exports,” Granholm said in the letter sent to refiners, a copy of which was seen by Reuters.

High U.S. oil product exports have been a concern for the administration of President Joe Biden this summer as gasoline prices briefly hit a record of $5 a gallon, helping drive inflation to 40-year highs. Gasoline prices have since fallen to about $3.86 per gallon.

Federal weather forecasters have projected an above-average Atlantic hurricane season, which can be a perilous time for refineries. Still-high gasoline prices remain a threat to Biden’s fellow Democrats ahead of the Nov. 8 midterm elections, when they hope to retain control of both chambers of Congress.

Granholm said the administration is talking with state officials along the East Coast, where gasoline levels are at their lowest in nearly a decade. It is putting the gasoline and reserves in the U.S. Northeast, which hold 2 million barrels of fuel, on “active standby” for potential release, and preparing other emergency contingency actions, she said.

The administration hopes that companies will “proactively address this need” of building inventories, she said. If that does not happen, the administration “will need to consider additional federal requirements or other emergency measures,” Granholm added, without providing details.

In a wide-ranging meeting with the same refiners in June, Granholm backed off a plan to ban U.S. fuel exports, but the idea has never fully left the table.

Refiners have said a ban could swamp domestic markets with fuel and cause some plants to cut output, which could decrease supply and put upward pressure on prices.

In addition, Northeast refiners import crude and fuels, trade that could be affected by an export ban.

“The export talk is at best a distraction; at worst, counterproductive to price and supply,” said a source familiar with Granholm’s talks with refiners.

The crown and climate – The New York Times