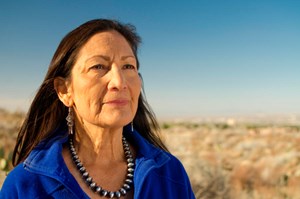 WASHINGTON (Bloomberg) –Interior Secretary-designate Deb Haaland downplayed her past opposition to fracking during a heated confirmation hearing Tuesday, as she sought to reassure senators worried she would clamp down on fossil fuel development.

A clean energy transition is “not going to happen overnight,” and the U.S. will continue to rely on fossil fuels even as the country advances technology and innovation, Haaland told the Senate Energy and Natural Resources Committee vetting her nomination. “There’s no question that fossil energy does and will continue to play a major role in America for years to come,” and the activity helps fund “critical services,” Haaland said.

The federal government also should continue permitting oil wells, pipelines and coal mines, Haaland said. “The earth is here to provide for us,” she said.

Haaland’s assurances appeared to provide little comfort to Senate Republicans who argued that the Democratic lawmaker’s criticism of fracking, support for pipeline protesters and endorsement of the Green New Deal make her unfit for a job that includes overseeing energy development on federal land. Yet the first portion of Haaland’s hearing — set to be continued Wednesday morning — failed to provide any new ammunition to critics that could derail her expected Senate confirmation.

And key Democrats from energy-rich states — whose votes could be key in the narrowly divided Senate — largely avoided grilling Haaland as they peppered her with questions about conservation and easement permitting.

Even Senator Joe Manchin, the chairman of the energy panel who hails from coal-flush West Virginia, took pains to emphasize that President Joe Biden should have wide deference in selecting his top deputies. “A president should be given wide latitude in the selection of his cabinet,” Manchin said.

Manchin, who has already vowed to vote against confirming Neera Tanden to be budget director, emphasized the broad scope of the Interior secretary’s role as the guardian of the nation’s public lands and its energy production. Lands and waters managed by the Interior Department produce nearly 20% of the nation’s energy “that is critical for our energy independence,” Manchin said, including 12% of its natural gas, 24% of its oil and 43% of its coal.

Manchin asked tough questions about Haaland’s commitment to energy development and her approach to the reclamation of abandoned coal mines but quickly moved on to other subjects.

Senator John Barrasso of Wyoming, the energy committee’s top Republican, said he believed Haaland’s positions are “squarely at odds with the mission of the Department of Interior,” including “managing the nation’s oil, gas and coal resources in a responsible manner, not eliminating access to them.”

“If Representative Haaland intends to use the Department of Interior to crush the economy of Wyoming and other western states, then I’m going to oppose the nomination,” Barrasso warned.

Senator John Hoeven, a Republican from North Dakota, unsuccessfully pressed Haaland to recuse herself from any Interior Department decisions over the Dakota Access oil pipeline, given the nominee’s support of Standing Rock Sioux protesters camped along its route in 2016. Haaland said she would lean on the counsel of Interior Department lawyers on the matter, while stressing that her actions were meant to support indigenous people who felt inadequately consulted over the Energy Transfer LP project.

Senator Steve Daines, a Montana Republican, said he still had “concerns” about confirming Haaland, after asking her to account for past statements about fracking, wildlife protection and energy jobs — with select quotes highlighted on posters propped up behind him. “The track record and the ideology in the past I think will perpetuate more divisiveness,” Daines said.

And Republican Senator Lisa Murkowski, who sharply questioned the Biden administration’s approach to energy development in her home state of Alaska, said after the hearing she was still undecided on the pick.

Haaland repeatedly emphasized that Biden’s policy views would take precedence. “If I’m confirmed as secretary, it is President Biden’s agenda, not my own agenda, that I would be moving forward,” Haaland said.

Haaland, who is a member of the Laguna Pueblo tribe west of Albuquerque, New Mexico, would become the first Native American cabinet secretary. Biden nominated Haaland after a months-long campaign by Native Americans and environmental activists, who have said she would reset the Interior Department’s relationship with tribal nations and would bring a fresh perspective to the agency most frequently led by White, male Western politicians.

Haaland, 60, was just re-elected to her second term as a Democrat representing New Mexico in the U.S. House of Representatives.