As Texas regulators attempt to determine how much is too much, an industry coalition on Wednesday said it would snuff out natural gas flaring in the state by 2030. 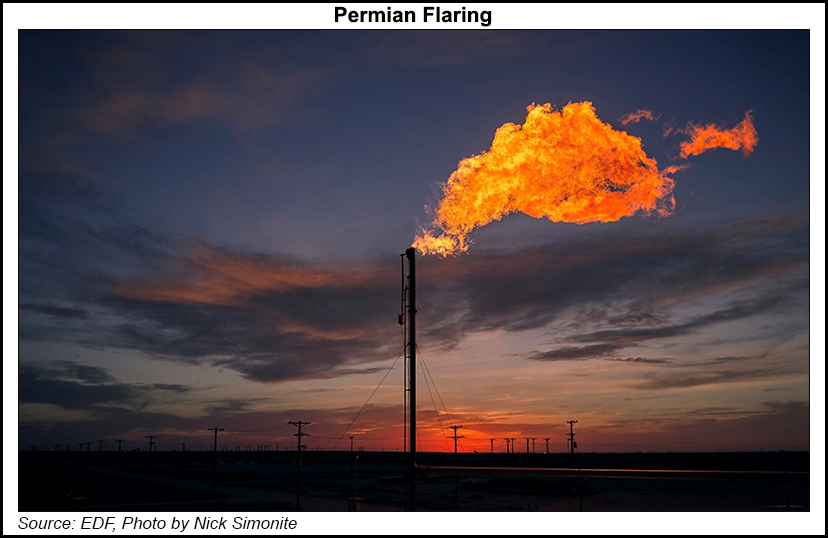 The announcement by the Texas Methane & Flaring Coalition, made up of seven trade associations and more than 40 top operators, came one day after the Railroad Commission of Texas (RRC) deferred dozens of requests to flare gas by exploration and production (E&P) companies.

Venting and flaring have been in the sights of environmental groups for years, and of late, increasingly by the RRC. The commission remanded 14 flaring requests for additional review by agency staff. However, it also approved dozens of other applications at the meeting.

Commissioners Jim Wright and Wayne Christian said flaring may at times be necessary, but it shouldn’t be the only option. Producers may flare or vent gas in the first 10 days a well is drilled, but the RRC must grant approval for further emissions, which it has regularly done.

“Getting an exception for our flaring rules should not be easy,” Christian said. “Staff should ask tougher questions, follow-up questions and generally just dig deeper.”

Wright, who joined the three-member RRC in January, called flaring “a necessary last resort during an upset, and we have work to do internally at the commission to ensure that we are not approving requests that go beyond that.”

Wright said he was “amenable to allowing fair time for flaring to occur in certain circumstances, but limits must be set.” He also issued a statement after the RRC meeting.

“The commission had sought to head off criticism that it’s too lenient over flaring guidelines when it adopted new rules in November that require more detailed disclosures when oil companies seek a permit,” Wright stated. “Yet that didn’t go far enough to temper criticism over the agency’s traditional hands-off approach.”

The rules enacted by the RRC in November following testimony by the state’s producers, require E&Ps to justify why they need to vent or flare gas.

Rystad Energy earlier this month issued an analysis of flaring in the Texas portion of the Permian Basin. The report, commissioned by the Environmental Defense Fund, found that 40% of the flaring expected in 2025 could be avoidable at low or no cost to operators.

Conservation group Environment Texas estimated that the RRC over the last seven years has granted producers more than 27,000 permits to flare or vent gas.

The RRC is “stepping up to the plate on flaring,” said global warming solutions advocate Emma Pabst of Environmental Texas. “Although we might not agree with the commission’s reasoning, which largely focused on the waste aspect of the problem but denied the environmental and climate implications of the practice, I’m glad that we can all agree on something. Texas is a big place, and to see the commission support an end to routine flaring, a goal that environmentalists and public health advocates have been pushing for years, shows that they’re willing to compromise.”

The Texas Methane & Flaring Coalition said it is working to eliminate “routine” flaring, which it defines as “from new and existing wells/facilities during normal production operations when gas gathering, processing or infrastructure are insufficient or unavailable.”

“Thanks to pioneering technologies, innovations and advancements unmatched by any other private sector, the oil and natural gas industry continues to serve as a catalyst for environmental progress here in Texas and around the globe,” said TIOGA President Todd Staples.

The Coalition, he said, “is one of several examples of the collaboration that’s occurring with many of the leading oil and gas producers in Texas to build upon the industry’s success in improving its environmental footprint and sustainable operations.”

The state’s independents “have set the standard for innovation and advancement in the oilfield, displacing dirtier fuels such as coal and biomass,” said TAEP President Jason Modglin. To help reduce emissions, “we need an all-hands-on-deck approach to solving problems, not costly top-down mandates that attempt to pick winners and losers.”

To pressure operators into reducing their gas waste, several Texas Democrats are pushing legislation to eliminate the practice or tax it.

State Rep. Vikki Goodwin, an Austin Democrat, introduced House Bill (HB) 1494 that would, among other things, impose a 25% tax on the market value of gas flared and vented. The gas byproduct now is exempt from state taxes normally levied on gas production, as it is burned off and released instead of being captured and marketed.

“Texas is one of the top oil and gas producing states, and as a byproduct of pulling oil out of the ground, this gas comes out — the same gas we use in our homes to cook our food,” Goodwin said. “But for oil producers, they see it as a waste product. Rather than figuring out how to sell it or how to use it onsite, they’re basically just throwing it away.”

Another bill introduced by Dallas Rep. Jessica González, HB 1377, would impose a tax on any natural gas burned off through flaring/venting into the atmosphere at the same rate as standard natural gas production, or 7.5% of market value.

In other state energy news, Land Office Commissioner George P. Bush said the Texas Defense Task Force has been formed to “identify federal overreach and fend off threats to the Texas oil and gas economy.”

Gov. Greg Abbott recently directed state agencies to use the tools needed to challenge the Biden administration’s actions that threaten the oil and natural gas industry.

“The Texas Defense Task Force is prepared to aggressively pursue every legal avenue to slow down and stop this alarming onslaught of executive orders and defend the hundreds of thousands of good-paying jobs and our economy at large,” Bush said.