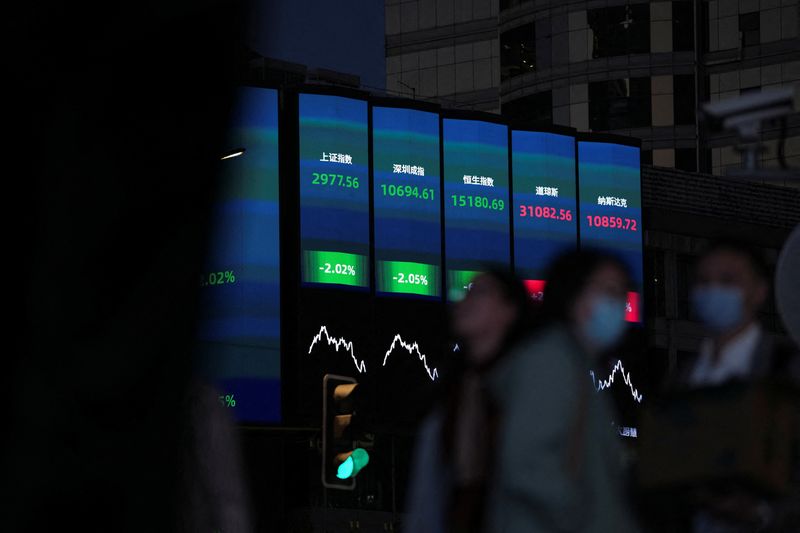 Wall Street rose on enthusiasm over a rally in U.S.-listed shares of Chinese companies, while climbed on hopes of increased demand from China, its biggest consumer. Goldman Sachs (NYSE:) predicted prices for the metal could hit a record $11,000 a tonne in a year.

“The realization that China is going to be back online and producing product will help bring down inflation and that’s a good thing. If inflation can come down, the Fed can step aside and pause,” said Tim Ghriskey, chief investment strategist at Inverness Counsel in New York, referring to the Federal Reserve.

Hong Kong’s rose more than 3% and the yuan traded near a three-month high, though economists warned that any economic boost would take time to emerge and the relaxation in curbs could temporarily depress demand as infections surge.

European shares fell for a fifth straight session amid growing fears of an impending recession. The pan-European index closed down 0.17%.

Fed policymakers meet next week and are likely to announce a 50-basis-point hike in the U.S. central bank’s lending rate, while indicating a slower pace of future rate hikes.

“The bulls can spin the narrative that both inflation expectations and real yields are coming down. They’re both moving in the right direction and therefore that justifies the (recent) equity rally,” Chang said.

“That’s very short-sighted because what’s awaiting the market is a recessionary environment and earnings estimates have to move lower,” he said.

Crude prices seesawed as expectations a key Canada-to-U.S. pipeline will return to service after a leak and increase the supply of oil weighed on the market at a time when economic slowdowns around the world have reduced energy demand.

The dollar edged lower against the euro as investors weighed the possibility that the Fed’s tight monetary policy could spark a recession. The euro rose 0.47% to $1.0554.

Treasury yields rose as investors awaited a report next week on inflation and the Fed meeting. Global bond yields, which move inversely to price, have tumbled in recent weeks on expectations of slower growth or recessions will curb the rise in rates.

Gold prices edged higher as the dollar eased and investors positioned themselves ahead of the U.S. inflation data and the Fed’s policy announcements.