Shell to sign deal with Qatar for large LNG project

(Bloomberg) — Shell Plc is set to follow other Western energy majors by taking a stake in a $29 billion project to boost Qatar’s exports of liquefied natural gas, just as Europe races to shore up new supplies of the fuel. 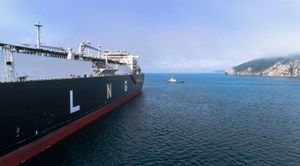 The London-based company will probably announce its partnership with state-controlled Qatar Energy in Doha on Tuesday, according to two people familiar with the matter. Shell’s chief executive officer, Ben van Beurden, is likely to attend the signing ceremony with Qatari Energy Minister Saad al Kaabi, who’s also CEO of QE, one of the people said.

Qatar is increasing its output capacity amid a global energy crunch. Demand for LNG is soaring as European nations try to wean themselves off Russian gas following Moscow’s attack on Ukraine.

In Singapore on Wednesday, Van Beurden told reporters to ask Al Kaabi on the timing of a potential deal with Qatar Energy. The company previously confirmed it bid for a stake in the North Field East project, which will raise Qatar’s maximum LNG production to 110 million tons by 2026 from 77 million

The world is heading for a “turbulent period,” with supplies of gas and oil tightening as more governments ease coronavirus restrictions, Van Beurden said in Singapore.

“Spare capacity is very low, demand is still recovering,” he said. “So with that, also the uncertainties with the war in Ukraine and sanctions that may come from it, there is a fair chance we will be facing a turbulent period.”

It’s unclear how much Shell will invest in North Field East. Exxon Mobil Corp. and TotalEnergies SE will each own 6.25%, while ConocoPhillips and Eni SpA are getting stakes half that size.

Qatar is one of few nations that can substantially replace Russian energy supplies to Europe, though not until its extra gas starts flowing.

It is planning a second expansion phase called North Field South. That will raise its capacity to 126 million tons a year by 2027. Many of the partners for that project will be the same as those on North Field East, Qatar’s government has said.