Shareholders push SEC for tougher climate regime for US oil


Activist groups are calling on the US Securities and Exchange Commission to make it easier for shareholders to table climate resolutions at oil producer annual meetings in another early test of the Biden administration’s efforts to tackle climate change.

During Donald Trump’s presidency, campaigners say, the SEC made it easier for companies to throw out shareholder proposals on spurious grounds rather than put them to investor votes.

“In the last four years, there were a lot of surprising developments and I think it’s fair to say that many shareholders felt like it was an adverse decision-making environment for shareholder proposals,” said Sanford Lewis, a lawyer and director of the Shareholder Rights Group.

“It was broadly considered a corporate-friendly environment in the last administration.”

The number of shareholder resolutions the SEC ruled as inadmissible jumped under the chairmanship of Jay Clayton, whom Trump appointed in 2017.

Companies were allowed to reject about 15 per cent of environmental and social proposals in 2018, compared with 9 per cent in 2016, according to Institutional Shareholder Services, an independent investor advisory group. That jump could have been higher had there not been a surge in shareholders withdrawing resolutions.

Joe Biden has promised to make tackling climate change a core pillar of his presidency. But a narrow majority in Congress will leave him depending on regulatory bodies such as the SEC, the Environmental Protection Agency and the Federal Energy Regulatory Commission to push his agenda.

The SEC is independent from the government but the president appoints its chairman and commissioners, who determine its direction.

Activists’ biggest gripe is the broadening of the definition of “micromanagement” during Clayton’s chairmanship. Previously this rule allowed companies to reject proposals that delved too deeply into the day-to-day running of a company, but the expanded definition meant any proposals that prescribed particular outcomes could be excluded.

In a letter to the SEC last month, the SRG — alongside fellow investor advocacy groups Ceres, the Forum for Sustainable and Responsible Investment and the Interfaith Center on Corporate Responsibility — asked the SEC to repeal the new interpretations “to re-enable shareholders to ask their investee companies to improve disclosure and performance on climate change”. 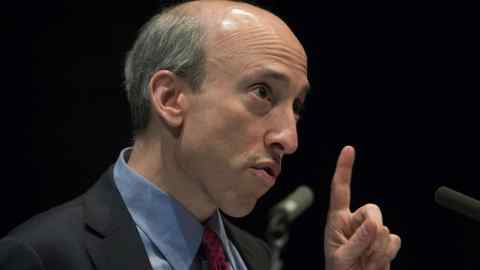 Shareholder proposals were responsible for sparking a shift in attitude by European oil groups in recent years, said Mark van Baal, director at Dutch shareholder group Follow This, which has submitted resolutions calling on oil groups Chevron, ConocoPhillips, Occidental and Phillips 66 to set targets for cutting carbon emitted by the burning of their products (so-called Scope 3 emissions).

“Oil majors have only promised to reduce product emissions after investors voted for shareholder proposals,” said van Baal. “We saw this first at Shell and then at BP and Equinor.”

Gary Gensler, the former Goldman Sachs banker Biden has picked for his SEC chairman, is widely anticipated to take a tougher line against companies on ESG matters. The number of resolutions rejected through “no-action” letters from the SEC will probably drop, analysts said.

“The interpretations of the grounds for admission under the ‘no-action’ process tend to go in waves, up and down, depending on what administration is in place and the chair of the SEC,” said Patrick McGurn, head of strategic research and analysis at ISS.

With Gensler yet to be confirmed to the position, any change in policy will take time, and will probably be too late for the 2021 AGM season. Still, analysts said John Coates, a Harvard academic who has been installed as acting head of the commission’s corporate finance division, could already be exerting some influence.

In a promising sign for campaigners, the SEC on Friday denied ExxonMobil’s request to block a shareholder proposal asking the company to report how its political lobbying activities align with climate change concerns. The proposal was filed by French bank BNP Paribas, which in 2020 filed a similar petition about climate change and lobbying at Chevron. The Chevron proposal won majority support from investors, including asset management giant BlackRock.

“Insufficient information is available to evaluate how ExxonMobil ensures that its lobbying activities, directly, in the company’s name, and indirectly, through trade associations, align with the Paris Agreement’s goals, and how misalignments are addressed,” BNP said.

The SEC did not respond to a request for comment.

Stock market analysis: Ahead of Market: 12 things that will decide stock action on

Climate crisis: An invisible, odorless gas is pitting Texas against the Biden