In his early days as leader, John Key updated
National’s position on Nuclear-Free New Zealand and
distanced himself from his predecessor’s abhorrent
“Orewa Speech”, setting a new direction for the Party.
Christopher Luxon now has a similar opportunity to shape the
direction of the National Party by committing to act
meaningfully on the pressing environmental challenges of our
time, which are also issues that a majority of New
Zealanders value and care about.

Now more than ever,
we need strong leadership to protect the oceans, native
biodiversity, freshwater and the global climate.

The
vast majority of New Zealanders are concerned about the
climate crisis, and their concerns are growing. The
unprecedented ferocity of the monsoon rains in Pakistan and
flooding and extreme weather we have witnessed recently
across New Zealand bring the consequences of our
destabilising climate closer to home. Support for political
leadership to significantly reduce emissions continues to
grow.

Nelson climate floods in August 2022 © Paul
Jennings / GreenpeaceClimate change is the existential issue
of our generation. Future historians will mark the courage
of leaders today by their willingness to do what needed to
be done to ensure a liveable planet. The science of climate
change is very clear – we need to significantly reduce
gross emissions of all greenhouse gases. If humanity is to
succeed, every nation, however large or small, must play its
part. 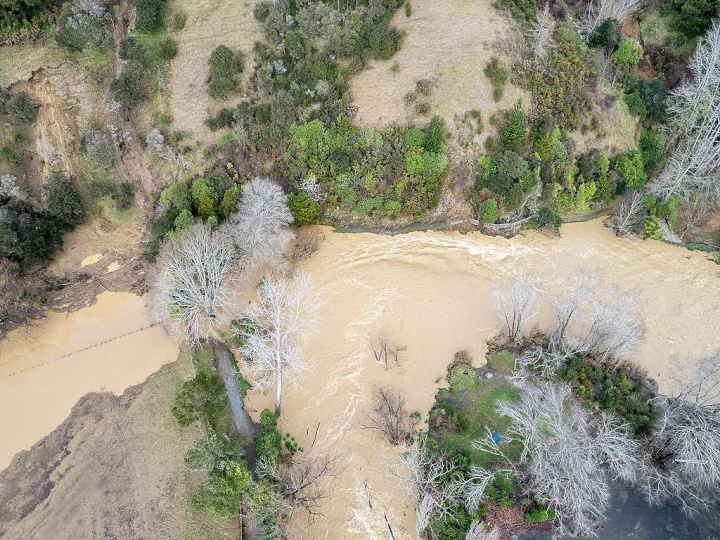 Which brings us to the
question of New Zealand’s ban on new offshore oil and gas
exploration permits. It has long been understood that we
cannot afford to burn most of the fossil fuels currently
held in reserves, let alone search for more if we are to
avoid catastrophic climate change. Even the conservative
International Energy Agency says that global oil and gas
exploration should end immediately if countries are to
successfully reach net-zero by 2050 and keep planetary
temperatures to 1.5C.

“There is no need for
investment in new fossil fuel supply in our net zero
pathway. Beyond projects already committed as of 2021, there
are no new oil and gas fields approved for development in
our pathway, and no new coal mines or mine extensions are
required. The unwavering policy focus on climate change in
the net zero pathway results in a sharp decline in fossil
fuel demand, meaning that the focus for oil and gas
producers switches entirely to output – and emissions
reductions – from the operation of existing
assets.”

To National’s credit, it has
committed to this 1.5C goal by supporting the Zero Carbon
Act, even if the Zero Carbon Act commitment is purely
aspirational and not binding.

However, if Luxon as
National leader was to reassert the commitment of his
predecessors and carry through with his intention to bring
back oil and gas exploration, this would put the party in
reverse by directly contradicting climate science and taking
the world away from the possibility of staying under 1.5C of
global heating.

Oil and gas exploration in 2022 is
tantamount to climate denial

It would also put
Luxon’s leadership in direct opposition to the New Zealand
climate movement and the many hapū and iwi and everyday New
Zealanders from around the country who fought for seven long
years to achieve the ban.

A Greenpeace inflatable boat
and a Whānau-ā-Apanui fishing boat disrupt the seismic
testing carried out by Brazilian oil giant Petrobras in
Raukumara Basin, off East Cape, North Island.© Malcolm
Pullman / GreenpeaceIn affecting the end to new offshore oil
and gas exploration permits, New Zealand became one of the
first countries to lock away possible fossil fuels across a
four million square kilometre area of the Earth’s crust
– nearly our entire Exclusive Economic Zone. As a
political action of global significance, the ban of oil
exploration ships from our waters is comparable to our ban
on nuclear ships, when the existential threat of nuclear war
was the world’s primary concern.

On the other hand,
to achieve success on climate change, we need a massive
boost in renewable electricity generation. Bewilderingly,
the current government has failed to support household
solar, in spite of Transpower pointing to the need for
significant distributed rooftop solar to decarbonise energy
and enthusiasm from New Zealanders to generate their own
power at home. As our Solarise New Zealand briefing paper
outlines, there is a huge opportunity in solar, and New
Zealanders are badly in need of a political leader who will
finally realise this opportunity for homeowners and the
climate.

While we face a multitude of climate-related
issues (did I hear a cow!), Christoper Luxon now has a clear
choice between two paths here – to either be a leader who
backtracked on climate action and fought to bring back oil
and gas exploration, or one who supported solarising our
nation. To assist in this choice, I’d like to dispel some
myths and further outline the case against re-awakening oil
and gas.

Groups such as the fossil
fuel lobby group Energy Resources Aotearoa (previously
called PEPANZ) have attempted to connect the last years’
increase in coal used for power generation to the 2018 ban
on new offshore oil and gas exploration. These claims do not
have a basis in fact. Some key points:

There is no gas
shortage if existing reserves are allocated strategically
– we have potentially decades of gas supply if we really
need it,
The combination of low lake levels (poor hydro
conditions) and persistent maintenance issues at the
Pohokura gas field saw coal use for electricity generation
increase by 29.5 per cent in 2021. This was nothing to do
with the oil and gas exploration ban and quite a lot to do
with the unreliability of gas!
The record level of coal
burning we saw in 2021 was also a consequence of decades of
under-investment in new renewables, combined with perverse
incentives in the electricity market.

While the 2018
oil and gas exploration ban signalled a clear transition
away from fossil fuels, which is exactly what the science of
climate change compels us to do, it didn’t shut off
existing reserves. In fact, by some estimates, we have gas
supply from those reserves until 2061.

For the last
three summers, Genesis Energy has been burning coal at
Huntly in the middle of the day during sunny heatwaves. If
our political leaders had realised the opportunity of solar,
thousands of Kiwi households would have been generating
power virtually for free during that time. Coal is the most
expensive method of generating electricity. The way the
wholesale electricity market is set up means that when the
Huntly coal burners come on stream, all of the electricity
generators get paid the highest price. There is a perverse
incentive for the generator retailers to under-invest in
renewables and keep burning coal, as witnessed by the
bloated profits we’ve seen from Genesis, Meridian and the
other large generator-retailers off the back of more coal
being burned. There is currently a political gap: New
Zealand homeowners want to be able to make their own energy
independently of the large power companies. The next
Government, regardless of its political party makeup, could
step in and realise that ambition with an interest-free loan
for household solar and batteries, as per our
briefing.

Nor does the offshore oil and gas
exploration ban have any bearing on current prices at the
petrol pump because all of New Zealand’s fossil fuels for
transport is imported from overseas. It always has been. In
fact, the billions spent on imported transport energy is a
major burden on the New Zealand economy and a huge source of
inflation in our economy. In the three months ended June
2022, the value of petroleum products imported added $2.2
billion to our current account deficit. While we depend on
oil-powered transport, New Zealanders’ cost of mobility is
forever at the mercy of volatile international oil markets.
Transitioning to electric transport, powered using homegrown
energy from New Zealand’s bountiful solar, wind and hydro
resources, is an opportunity to increase energy security and
resilience by becoming more self-sufficient in the face of
growing global uncertainty while also cutting climate and
air pollution, and the current account deficit and
inflation. Even more so if that is matched with huge growth
in public transport, cycling and walking.

As a final
point, the offshore oil and gas programme was an expensive
and unproductive investment that relied on intensive wooing
of overseas explorers who would have owned and exported any
fossil fuels found and paid New Zealand a nominal royalty
for the privilege. Over a period of around a decade, at the
height of government support for the program, and despite
exploration efforts by multiple international corporations
in risky deep sea prospects off the North and South Islands,
there were no significant finds. Only in 2020 did OMV report
a prospect in shallow water Taranaki, which has yet to be
appraised. It would take large amounts of public money and
political capital to affect and justify a resuscitation of
the program with the likelihood of nominal returns to New
Zealand. Even in the baldest financial terms, oil and gas
exploration is a risky and poor investment for New Zealand
– and contrary to our clean green reputation in a
decarbonising world.

Meanwhile, New Zealanders have
had to pay hundreds of millions of dollars to decommission
the old oil fields of bankrupt oil companies.

To
conclude, reversing the ban on new offshore oil and gas
exploration would be bad for the climate, wouldn’t help
New Zealand address its energy challenges and would
communicate to New Zealanders that the National Party is
embracing the climate denial policies of past leaders rather
than Luxon’s own stated aspirations to be bold on
climate.

Now more than ever, New Zealanders and the
world need bold leadership on climate, no matter who is in
Government.

Become a member
Find out more

Montrose Port in Scotland could become the country’s first port with shore power for offshore energy vessels following a joint...

$8.5 billion profit for BP as prices soared during Russia-Ukraine war

A historic oil price collapse, with worries headed into 2021