On the heel’s of  “Gold’s Technicals Look Terrible,” such condition essentially remains the case, be it by various classically-accepted technical studies on any of Gold’s daily, weekly or monthly measurings. (Again as Cosell would’ve put it: “That’s tellin’ it like it is!”). It just is. 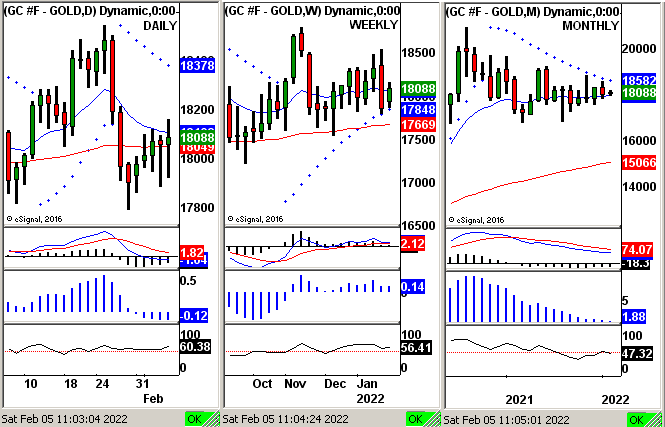 (And fully exhale). If not outright terrible, hardly encouraging. And beyond all these “canned” studies as also itemized a week ago, here next is a key deMeadville study which is a regular staple of The Gold Update and directly specific to this week’s title: ’tis the 21-day (one trading month) linear regression trend, the now downward sloping diagonal grey trendline for Gold on the left and for on the right. Both regression trends had been positive from (respectively) 22 and 28 December through (respectively) this past Wednesday and Thursday, Gold then settling its week on Friday at 1809 and Silver at 22.52 with both grey trendlines now in decline: 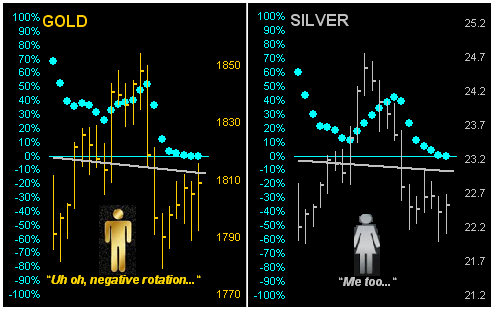 “But, mmb, your baby blue dots being at 0% say there’s no trend consistency, right?”

Hope springs eternal, does it not, Squire? That is statistically correct that the two trends now are down, but not consistently so, at least not yet…but nobody knows.

But wary nonetheless: for Gold, this is its fifth rotation to negative from one year ago-to-date. The average downfall of the prior four occurrences is -53 points within the ensuing month. That means per Gold’s Weekly Bars (the next chart) the parabolic trend shall flip from Long to Short, (as we’d anticipated a week ago it would, but is still lingering Long). Regardless, Gold’s price by the downfall average would succumb to 1754. Whereas for Silver also from a year ago, this is her sixth rotation to negative, the average downfall of the prior five occurrences being -2.01 points within the ensuing month, suggestive of a drop to 20.42. Terrible indeed. Here’s the Gold graphic, price not quite penetrating the rightmost rising dots of parabolic Long trend, with the line-in-the-sand to flip to Short now at 1785. Little wiggle room remains: 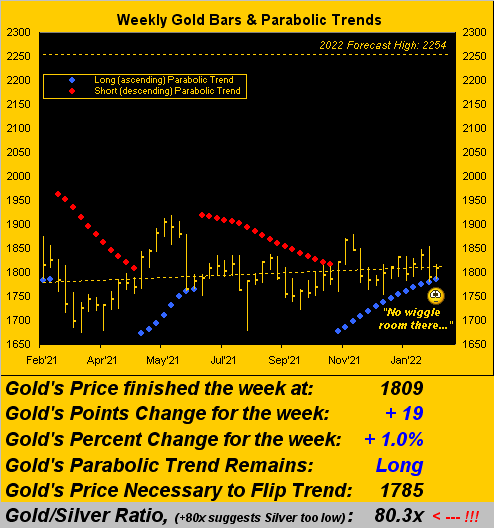 To be sure, we wave the Gold (and Silver!) flag as much as anyone who understands The Gold Story. Obviously with Gold valued by our opening Scoreboard at 4117—and price only 1809—the entire world ought be waving the precious metals flag!

But in the current climate of technical negativity and fundamental naivety, we’re obliged to be fair given reality. And no, we’re not “short” Gold nor Silver, let alone would we physically “lighten up Gordon Brown-style” (as occurred through the turn of the millennium ’round a price of 275). Clearly there’s no point in ever really selling until: “everybody wants it!” And that shall be at Gold and Silver prices far higher than today’s levels.

Moreover as a reminder that Gold is taken very seriously as a sovereign stockpile, you’ll recall when asked during 2013 within the U.S. Executive Branch if its Treasury would sell some Gold in the spirit of “The Sequester”, the response essentially elicited a retort of “Sorry we asked.” (You do NOT mess with the Gold).

‘Course as stated a week ago, all this near-term negativity to the contrarian investor/trader is “a massive buy signal…” Doing your part would be most appreciated. And one darn good fundamental reason is: the StateSide economy is again back on the skids. Ought the Federal Reserve thus really raise its Funds Rate on 16 March…only to then perhaps be forced to rescind it come 04 May? Got Gold? Have a look:

And why is the Baro taking a blow? After all, this past week found the January improve, as did and Q4’s . But: month-over-month, all of the following metrics did worse: January’s Institute for Supply Management Index (both and readings), (net jobs were actually lost), , the along with the duration of the , December’s and , plus Q4’s .

Thus what we really have is Broadway’s big hit “Bye-Bye Baro” featuring that top tune “Sing a song of stagflation, It’s the latest sensation, Rates are up and the economy’s down, The people all are wearing a frown……” [With a tip of the cap to Leonard Bernstein, Betty Comden and Adolph Green, ’44].

But not to worry, all is well! For as reported this past week by Dow Jones Newswires, the economic “recovery is maturing and no longer needs low interest rates, economists and Fed officials say.” Ok!

Then on this side of the pond we’ve Lagarde’s-led European Central Bank Executive Board in unanimity acknowledging “soaring” inflation, yet no rate rise is expected this year, and further large scale EuroZone debt purchasing shall remain de rigueur. Bonjour!

As to how this all is playing into the five primary BEGOS Markets, here are their percentage tracks for the past 21 trading days (one month)-to-date, with Big making hay, Gold having lost its way, and the S&P only just beginning its decay: 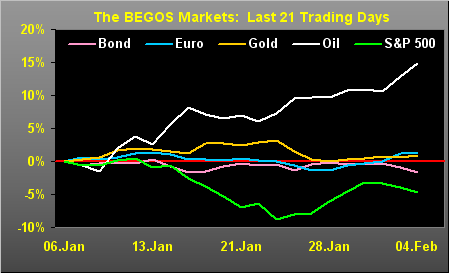 As for Q4 Earnings Season, just over half of the ‘s 505 constituents have reported. Of those, the 242 that generated positive bottom lines for their Q4s of both 2021 and 2020 show a median improvement of +13.4%: that’s it. To be honest, our “live” price/earnings ratio for the S&P (now 42.6x) has come down from 50x: but that median improvement is far too meager to bring the ratio down to “normality” (i.e. 22x) as rates rise…if they do.

Failing to substantially rise are the precious metals’ prices, as next we’ve the 10-day Market Profiles for Gold (below left) and Silver (below right). The sole technical positive in this week’s entire piece for Gold is the Profile’s trading support in the denoted 1807-1798 range; however, given Gold’s expected daily trading range is 20 points, and expected weekly trading range is 47 points, ’tis not much of a platform upon which to stand. And as for Sister Silver, the denoted 22.50 level already is her final line-in-the-sand: 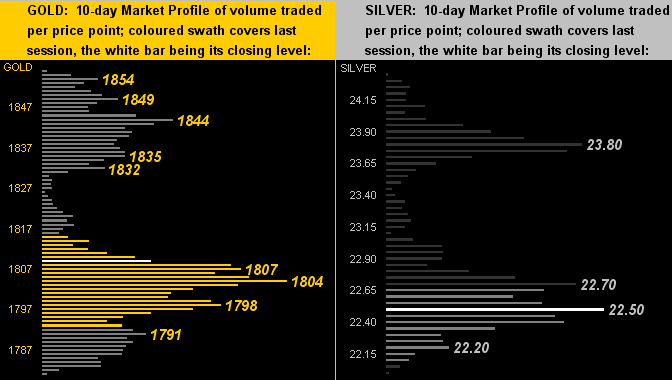 Ahead of a week with a light economic calendar (for which the falling Econ Baro may take some relief), former Fed Governor Sarah Bloom Raskin remains a nominee to likely be Fed Vice Chair for Supervision. Looking for some relief from her being questioned on Climate Change, we’re trying to assess how that fits in with the job of developing the Board’s policy recommendations as regards regulation and supervision of banks. Her experience is foundationally furthered by her Amherst College Economics Degree, but that was back in ’83, (before there was Climate Change). Either way, present negative trend rotation aside, with Gold priced at less than half its true value, you financially can change your climate for the better!

Why are people made to pay so much for petrol when global crude oil prices are low,

Is Amazon As Green As It Claims To Be?

After a catastrophic year, oil is posting a remarkable recovery