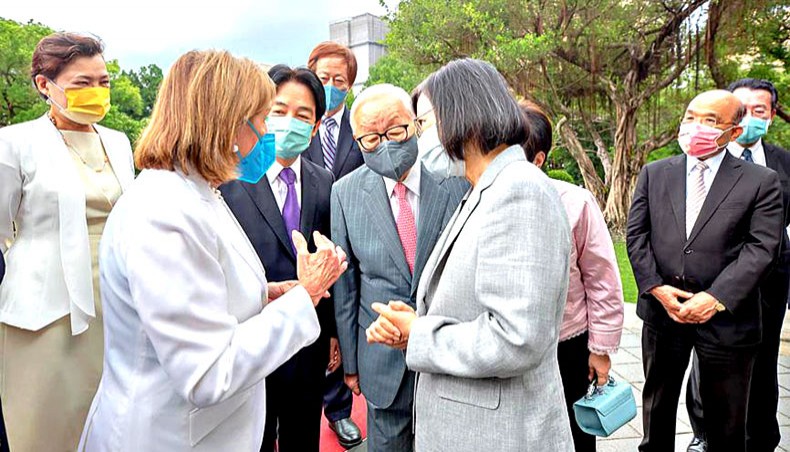 ARE the semiconductors going to replace ‘oil and gas’ as the key strategic assets for global powers in the coming days? The answer seems to be a big yes. Suddenly, the semiconductors have become a new centre of gravity in global power equation, particularly in the growing Sino-US acrimony over the Taiwan Strait. From trade war of the Trump era, the Sino-US rivalry is now graduating to the tech-war. US House Speaker Nancy Pelosi spent just 24 hours in Taipei during her much-touted visit there, but despite her extremely tight schedule, she still ensured to allocate special time slot to meet Mark Lui, chairman of the Taiwan Semiconductor Manufacturing Corporation, the world’s largest chip manufacturer.

The meeting between the two was part of long series of efforts by Washington to establish a foundry of microchips in the US in collaboration with the Taiwan Semiconductor Manufacturing Corporation. In today’s 5G communication environment, from smart mobile phones to extremely sensitive military weapons to medical devices and space stations, the semiconductors — or microchips as they are called in layman language — are the critical component of almost everything that is being used in every corner of the globe.

Taiwan has 64.5 per cent share of the global semiconductor market, with TSMC, which also provides world’s most advanced microchips to companies like Apple, Qualcomm and Nvidia, alone caters to 54 per cent global demand of semiconductors. The TSMC and Samsung (South Korea) are the only two companies that have the capability to manufacture the most advanced semiconductors of five nanometres in size. There is a genuine fear in the United States that Taiwan’s reunification with the mainland China would be the most dreadful thing that may happen to the national security of the US. The Chinese control, direct or indirect, over the global supply chain of the semiconductors will indubitably render the US extremely vulnerable vis-a-vis China.

This simply suggests that that China’s long-term goal of reunification with Taiwan now poses direct threat to the US interests. Through the 1971 Shanghai Communique and the 1979 Taiwan Relations Act, the United States officially adheres to the ‘One China’ policy which entails that the people in both mainland China and Taiwan believe that there is ‘One China’ and that they both belong to it. This keeps the possibility alive that the TSMC could one day be in territory controlled by Beijing, which is the most unpleasant proposition for Washington at the moment. Interestingly, China is also equally dependent on Taiwan for the supply of semiconductors. The local production of semiconductors hardly fulfils 10 per cent of China’s demand. Though it is quite uncertain to predict for how long the Taiwan dominance over the semiconductors will last, but the American policy makers have been working on two-pronged strategy to address this situation.

They have been trying to lure the TSMC to establish a microchip manufacturing facility in the United States. The US Congress has recently approved the Chips and Science Act that provides option of conditional subsidies of $52 billion to support semiconductor foundry in the US — but the companies will receive these subsidies only if they don’t do business with China. So, there will be increasing pressure on chip manufacturers, including the TSMC, to choose sides. Pelosi’s much-hyped visit, despite intense opposition from Beijing, was also an indirect message to reassure the TSMC about the full American support. The intensity of China’s hostility towards Pelosi’s Taiwan yatra can be gauged from the fact that president Xi Jinping made direct call to president Biden to stop her trip. However, completely ignoring Xi’s threats of ‘playing with fire’, Pelosi went ahead with this trip to send a clear signal that Washington is taking the semiconductor issue very seriously. China, as expected, has resorted to retaliatory steps against the United States and Taiwan.

Ironically, after Pelosi’s trip, compared to tangible and stringent actions against the United States, most of China’s retaliatory steps against Taiwan — including massive military drills in the Taiwan Strait — are more of symbolic in nature. Beijing has announced some economic sanctions on Taiwan that include exports of natural sands to the self-ruled island as well as ban on imports of some Taiwanese products. All these sanctions are very mild in nature because they are not likely to cause even a scratch to the $765 billion Taiwanese economy. These sanctions do not touch the semiconductor exports at all.

On the other hand, the United States has sent invitations to the envisaged strategic alliance of four global chip powerhouses that also includes Japan and South Korea, generally known as the Chip 4 or Fab 4, a platform apparently aimed at countering China’s growing influence in global supply chain and isolate China in the domain of semiconductors. Reports are emanating from Seoul that Washington is putting pressure on South Korea, which wants to have a balance between its bilateral ties with both countries, to be part of the US-led semiconductor group. Though the South Korean government has not yet officially confirmed about the participation in the Chip 4 gathering, but president Yoon Suk-yeol is under immense pressure to take some hard decisions in this matter. South Korea is concerned about the possible trade war with China in case it decides to join the Chip 4.

On the parallel turf, the United States is also working closely with Japan to develop cutting-edge, next-generation semiconductors for application in quantum computers and artificial intelligence. Last week, the foreign and commerce ministers of two countries signed to set up a research centre this year to develop a leading-edge semiconductor with a line width of 2 nanometres (much smaller than existing most advanced 5nm semiconductors) with expected mass production to be kicked off in 2025. South Korea and Taiwan are the only countries in the world with the capabilities to manufacture chips of 5 nm. The US and Japan, in anticipation of supply disruption if Taiwan is invaded by China, are making pre-emptive move in this direction.

In order to secure future leadership in semiconductors, apart from approaching the TSMC, the Americans have also enticed South Korean companies, Samsung Electronics and SK Hynix, to invest in the proposed semiconductor foundry in the United States to take advantage of the subsidies being offered. However, the dilemma with the TSMC and South Korean companies is that if they choose the US, they will lose China.

The semiconductor has now increasingly replaced oil and gas as core strategic asset for big powers, indicating a new shift in global political and economic order. Conflicts and conciliations surrounding semiconductor hegemony can drastically change the whole equation at any time. So, the semiconductors appear to be the new element in the evolving global power equilibrium in the coming days.

Dr Imran Khalid is a freelance contributor from Karachi, Pakistan.

The head of U.S. intelligence says fighting in Russia’s war in Ukraine is running at a “reduced tempo” and suggests Ukrainian forces...

The European Union will be banning the insurance or financing of naval vessels carrying Russian oil priced over the price...

Oil officials from OPEC and Russia will meet on Sunday to consider production levels, just hours before the European Union...

MINNEAPOLIS – The Environmental Protection Agency on Thursday proposed increasing the amount of ethanol and other biofuels that must be...

Despite the support that Iraq’s new prime minister, Mohammed Shia’ al-Sudani, has received from pro-Iran factions in the Iraqi Parliament,...