The outgoing head of Brazil’s state-controlled oil group Petrobras has hit back against President Jair Bolsonaro and suggestions that the populist leader might put artificial limits on the price of fuel.

“If you want to have a market economy, you have to have a market price. Prices below have many consequences, some predictable and others unpredictable, but all negative,” said Roberto Castello Branco, who was fired by Bolsonaro last week following a dispute over the price of petrol and diesel.

With elections looming next year, the Brazilian president is keen to consolidate support among key constituents, including the nation’s tens of thousands of truckers who have protested bitterly in recent weeks over the rising costs of fuel.

But the decision to replace the University of Chicago-educated Castello Branco with a former army general with no experience in oil and gas sent Brazilian markets into a tailspin this week, with Petrobras on Monday shedding 20 per cent of its value — more than $13bn. The turmoil also spread to the currency, which dropped 2 per cent.

For many it suggested that the Brazilian government was once again intervening in the operations of the oil group, which was pushed to brink of bankruptcy under the former president Dilma Rousseff’s administration in part because of her efforts to subsidise the price of fuel. 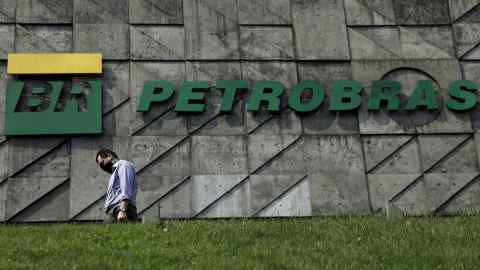 “Previous attempts to escape the Petrobras parity rule proved disastrous. We lost $40bn,” he said, referring to the policies of the Rousseff administration.

“Since then we have reduced our debt by almost $36bn but it is still a very indebted company and our debt is in dollars. How will you reconcile dollar-denominated obligations with local currency?”

The replacement of Castello Branco with Silva e Luna is likely to be formalised by a shareholder vote in the coming weeks. The Brazilian state holds about 36.8 per cent of Petrobras but 50.5 per cent of the voting rights. In a board meeting this week only two members expressed objections about the overhaul at the top.

Shortly after the announcement that Castello Branco would be replaced, Bolsonaro — who has long downplayed the seriousness of the pandemic despite catching Covid-19 — also suggested that the executive was lazy given that he had spent the past year working from home.

Castello Branco did not take the insult lying down, saying that working from home had for Petrobras “not only reduced the rate of virus contamination but has also reduced costs and increased productivity”.

“And in the future, we will migrate to a hybrid regime that has been approved by the vast majority of our employees.”

His comments came as Petrobras unveiled results for last year, which it said was “marked by countless challenges caused by the Covid-19 pandemic and the consequent drop in global fuel demand”.

The Rio de Janeiro-headquartered group reported a 10 per cent annual decline in revenues to R$272bn (US$49.7bn) and an 82 per cent drop in net profit to R$7bn.

Can Oil And Electric Vehicles Coexist In Modern Markets?

Romanian Navy Ship Hit By Drifting Mine In Black Sea

FTSE 100 receives shot in the arm from coronavirus treatment optimism