Futures for all the major US indices—the , , and —reversed higher on Tuesday, erasing earlier losses. Investors were weighing conflicting macro economic fundamentals: promises of more government liquidity and a restarting global economy versus grim economic data and continuing social unrest in the US as well as simmering trade tensions between Washington and Beijing. Optimism clearly prevailed and European shares opened markedly higher.

Oil inched up while the US dollar continued slipping.

Despite the worst economic data since the Great Depression and by the Fed and the IMF that the economic slump could be more severe than expected and last longer than anticipated, traders have been bidding up global stocks to three-month highs on the promise that worldwide reopenings would create a V-shape recovery—immediate growth to follow the contraction, with no downtime.

The between the world’s two largest economies might have also given investors pause that an economic recovery could be more difficult to achieve under trade war conditions, though not for long it seems. That’s ironic since opening economies are already facing uphill battles as coronavirus cases in countries that have ended lockdowns spike. Plus the uncertainty around COVID-19, with more than 6 million confirmed cases and growing and a global fatality count of 375,987, will be harder to ignore than some might think.

We don’t consider the current unrest in the US to be a source for long-term worries, though is both tragic and polarzing. Despite that, however, the US is still one of the most stable countries in the world.

However, we are concerned that the Fed’s money printing will cause a spike in inflation that could get out of control, that a cold war between China and the US would depress growth for as long as it persists (or till world manufacturing and shipping are restructured). Plus, chief among our concerns is a still nonexistent cure for COVID-19.

This morning, US futures were relatively flat, but have since picked up, with contracts on the S&P 500 and the Dow fluctuating though Russell 2000 futures are slightly higher. 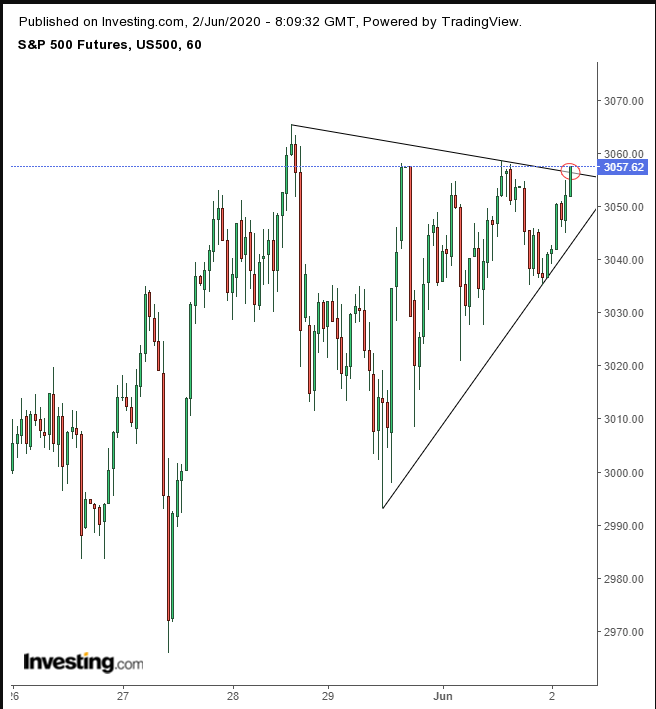 From a technical perspective futures on the S&P 500 Index are attempting to complete a symmetrical triangle, a continuation pattern. This would be considered bullish with an upside breakout, within the uptrend.

The Index shot up at the open, forming a near 0.5% gap, extending gains to 1.64%, at the time of writing, trading at session highs. Germany’s drove the regional gain, surging 2.7% right at the open, treading even higher to a 3.2% gain. It also for the first time since March.

The biggest boost to the index came from Lufthansa’s (DE:) upside gap, the result of a 9.3% leap after its supervisory board approved a 9 billion-euro ($10 billion) government bailout for the airline, driving Frankfurt-listed shares. Though the German airline company gave up some of its opening gains within four minutes, as of the time of writing, its stock is still up 6.4%. 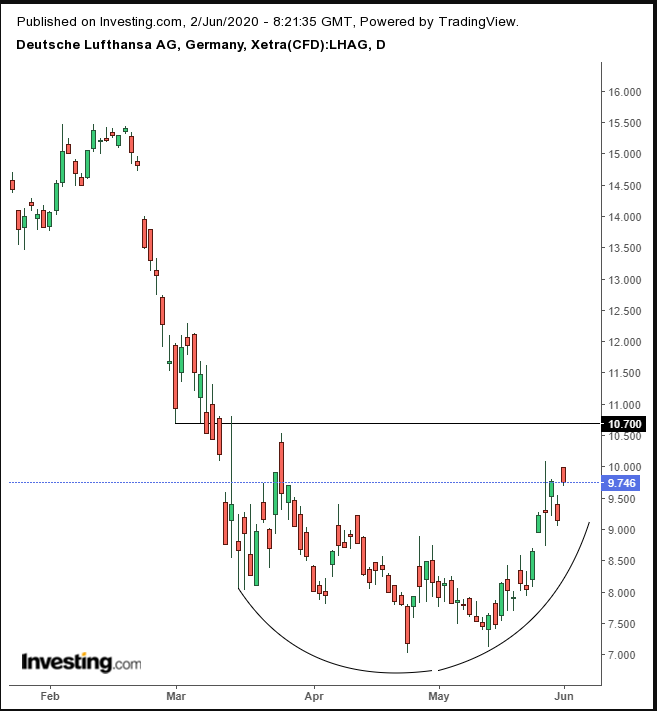 Technically, Lufthansa’s stock is developing a rounding bottom. We’d consider it complete when the price reaches €11.00.

Earlier, Asian shares were in the green across the board. Japan’s outperformed other regional indices, (+1.2%), and China’s lagged (+0.2%) lagged.

While the yield on the US benchmark Treasury note was flat, the extended a selloff for the fifth of six days. 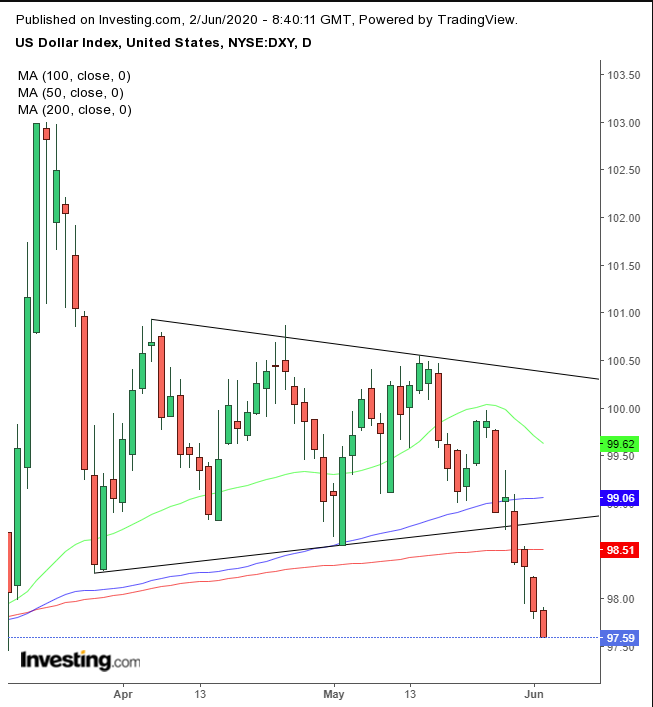 The global reserve currency is completing a pattern that suggests a further decline is ahead.

Despite the weakening USD, gave up gains today, retreating slightly. 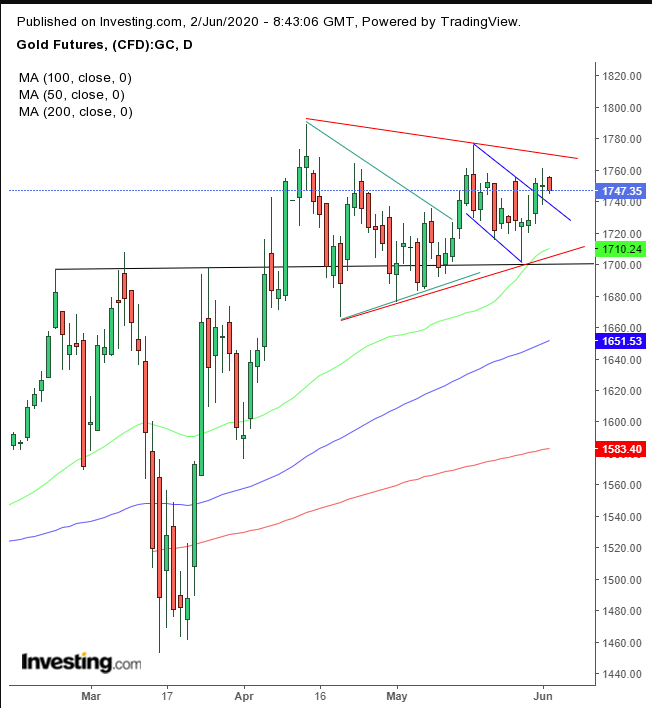 Still, the precious metal continues to be supported by its .

crossed the $36 level for the first time since March 6. 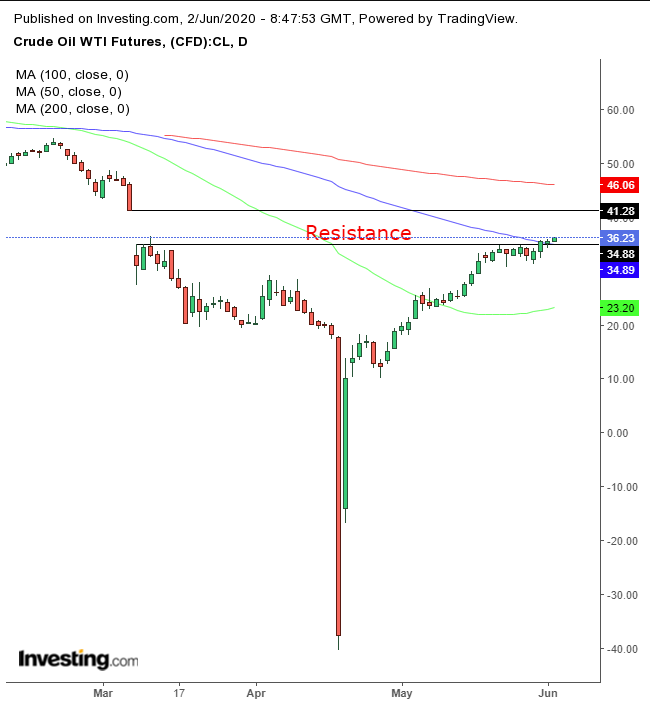 The commodity’s buoyancy likely comes on hopes that OPEC+ will extend production cuts. From a technical standpoint, risk is to the downside, as WTI entered levels presumed to be rife with supply, after the price collapsed in April, forming a unique 20% wide falling gap. The utmost resistance is expected to be at the top of the gap, at $41.28.

Is Teekay Tankers Ltd. (TNK) Stock at the Top of the Oil & Gas Midstream Industry?

Teekay Tankers Ltd. (TNK) is near the top in its industry group according to InvestorsObserver. TNK gets an overall rating...

Sanaa: We will not allow the coalition to restart the LNG project

How Spiking Energy Prices Complicate the Fight Against Global Warming