North Sea oil and gas producers have told UK chancellor Rishi Sunak they are rethinking projects in Britain because of a new 25 per cent windfall tax on their profits, branding the policy “anti-investment” and “anti-business”.

In the strongest protest yet against the government’s “energy profits levy”, Brindex, an organisation that includes privately held and listed oil and gas producers, warned that the shock of its “sudden introduction” at the end of May is “very real and has already had a dramatic effect” on the industry.

The criticism from smaller and medium-sized producers — including some held by private equity groups — comes after initial assurances from larger energy companies such as BP that the windfall tax will not limit investment significantly.

Independent oil and gas companies became a powerful force in the UK North Sea after the oil price crash of 2014 as companies such as Harbour Energy, Neo Energy and Siccar Point Energy scooped up assets from retreating majors that wanted to refocus their spending on cheaper regions. Many are now among the top 10 producers in UK waters.

Executives at some small and medium-sized producers are particularly angry at the levy as they feel they are bearing the brunt of a policy that was partly introduced in response to comments made by BP chief executive Bernard Looney, who previously said the windfall levy would not affect his company’s investment plans.

“There is a degree of anger at comments made by Looney that is being expressed behind the scenes,” said one senior industry figure.

Some of the oil majors have, however, voiced stronger opposition since the new tax arrangements were introduced on May 26. Many had been expecting just a one-off hit, but BP attacked the chancellor for introducing a multiyear proposal that will remain until December 2025 unless oil and gas prices “return to historically more normal levels” in the meantime.

In a strongly-worded letter sent to the chancellor on June 8, Robin Allan, chair of Brindex, warned that the new tax had created a “significantly more complex and uncertain fiscal regime in the UK”.

Allan wrote that the levy was forcing his members to “reassess and reconsider their future investment projects” and would also restrict their access to capital. Brindex members include Harbour, Neo, Serica Energy and EnQuest.

Independent energy companies often rely on bank lending to fund new projects. But Allan said the levy added an additional risk to the models used by lenders to calculate how much debt they were willing to offer, resulting in “reduced facilities . . . and therefore less capacity to invest”.

The new multiyear levy was announced by Sunak to partially finance a £15bn government support package for households facing a further 40 per cent jump in their energy bills in October when the industry regulator will increase the energy price cap.

The levy raises the overall tax rate for oil and gas producers to 65 per cent from 40 per cent, although it includes incentives to reward companies spending on new projects. Some companies that had already planned significant investments this year, such as Serica Energy, have said the incentives should lessen the levy’s impact. 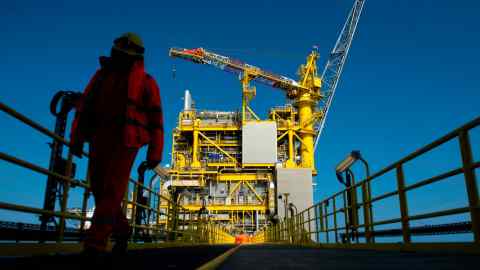 The Treasury insisted the new incentive allowance “means businesses will overall get a 91p tax saving for every £1 they invest . . . and means the more a company invests, the less tax they will pay”.

But Allan warned the arrangements penalised other groups that invested during the coronavirus pandemic despite oil prices at the time hitting multi-decade lows. Given their smaller cash reserves, independent companies tend to have cyclical investment programmes, with some years of high capital expenditure followed by cash preservation to pay off loans.

The levy also circumvents established tax breaks, particularly the ability to use losses wracked up in previous years to offset tax payments.

“It is quite incredible that this anti-investment, some might say anti-business move should happen under a Conservative government,” Allan wrote in the letter, seen by the Financial Times.

Is There Enough Land For Our Ambitious Renewable Energy Agenda?