Neptune Energy and its partners announced a new commercial oil discovery at the Ofelia exploration well (PL 929), close to the Gjøa field in the Norwegian sector of the North Sea.

Neptune has completed drilling of the Ofelia well, 35/6-3 S, and encountered oil in the Agat formation. 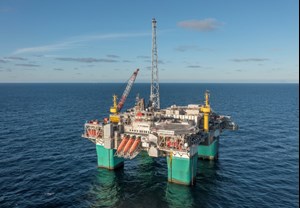 The preliminary estimate of recoverable volume is in the range of 2.5-6.2 million standard cubic meters (MSm3) or 16-39 million barrels of oil equivalent (MMboe). In addition to the Agat volumes, north of the well there is an upside of around 10 MMboe recoverable gas in the shallower Kyrre formation, which brings the total recoverable volume to approximately 26-49 MMboe.

Located 15 kilometers north of the operated Gjøa platform, at a water depth of 344 meters, Ofelia will be considered for development as a tie-back to Gjøa, in parallel with the company’s recent oil and gas discovery at Hamlet. The platform is electrified with power from shore and produces at less than half the average carbon intensity of Norwegian Continental Shelf fields.

Neptune Energy’s Managing Director for Norway and the UK, Odin Estensen, said: “I am pleased to announce our second discovery in four months which further enhances Neptune’s position in the Greater Gjøa Area.

“Gjøa is an important growth area for Neptune in Norway, where existing infrastructure allows for low cost and low carbon developments.”

It is the third discovery by Neptune Energy in the Agat formation, a reservoir which until recently was not part of established exploration models on the Norwegian Shelf.  The first was at the Duva field, which is now onstream and being operated by Neptune. The second was the company’s discovery at Hamlet, with estimated recoverable volumes between 8-24 MMboe. Together these discoveries contribute to the opening of a new geological play in Norway and can add additional new volumes to the Neptune operated Gjøa facilities.

Neptune Energy’s Director of Exploration & Development in Norway, Steinar Meland, added: “The Ofelia discovery underlines the strength of our exploration strategy and confirms the high prospectivity potential of the area around Gjøa, where we have several more exciting exploration opportunities.”

Ofelia was drilled by the Deepsea Yantai, a semi-submersible rig, owned by CIMC and operated by Odfjell Drilling.

Why are UK home energy bills going through the roof?

Why are UK home energy bills going through the roof?