NFG has an off-cycle financial reporting schedule, albeit one that makes sense for natural gas demand, which peaks in the winter and summer. The company’s fourth quarter ends in September; its March 2020 financials thus marked six-month or half-year results.

The company’s dividend yield is 4.1%, good especially when compared to competitors. Its vertical integration, including midstream and utility operations, gives it a buffer against changeable natural gas prices. The company has strong governance ratings, also different from some of its competitors.

On May 4, 2020, National Fuel Gas announced that it was buying Shell’s (RDS.A) (NYSE:RDS.B) Appalachian assets for approximately $500 million. Included in the assets are:

*about 300 MMCF/D of firm transportation capacity.

These assets are expected to generate about $125 million in incremental EBITDA in the year following closing, based on existing hedge portfolio, $2.50/MMBTU natural gas prices, and $25.00/barrel oil prices (West Texas Intermediate).

Second, an oil price war decreased the price for LNG because outside the U.S., LNG prices are tied to oil prices. Thus lower demand and lower prices have combined to reduce U.S. exports of LNG, which has otherwise acted as something of a safety valve for U.S. gas oversupply.

Third, in the first quarter of 2020 (the company’s second quarter for financial reporting), National Fuel Gas suffered the same challenging circumstances as other Appalachian gas companies: too much supply exacerbated by a warmer-than-normal winter (winter is the major demand season for natural gas) and much more associated natural gas from the Permian and Bakken oil basins.

However, an offset is that since a sizeable percentage of natural gas is “force-produced” with oil (as associated gas), temporarily reduced U.S. oil production has reduced the volumes of associated natural gas. This effect appears to be quickly attenuating, however, with Marcellus production increasing again to replace it.

The gas market has been improving somewhat due to increasing substitution of natural gas for coal in utilities, such that gas use now outweighs coal. The charts show that gas and renewables growth offset declining coal use starting in about 2015. 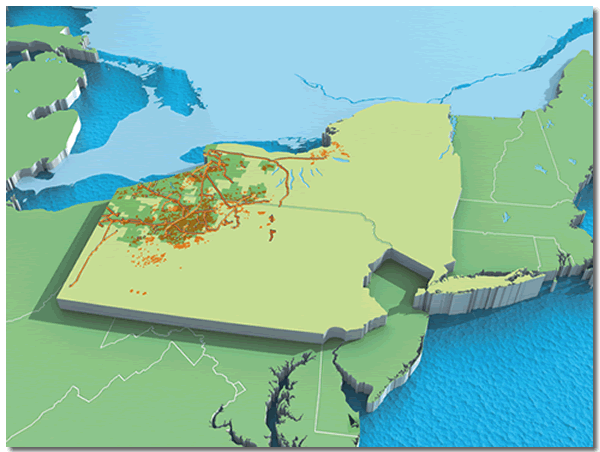 Adjusted EBITDA for the quarter, a non-GAAP measure, was $231.1 million, a slight increase from the same quarter a year ago.

The chart below gives the January-March 2020 snapshot of NFG’s adjusted EBITDA by segment. 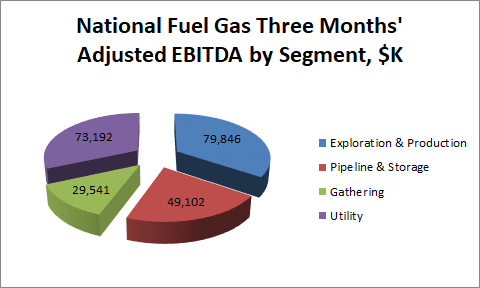 (Note that the following are based on NFG’s reserves in October 2019 and do not include the recent Shell acquisition.)

The SEC PV-10 value of the future revenue of company’s proved developed and undeveloped reserves at October 21, 2019, was $2.16 billion. This value derives from an oil price of $64.73/barrel and a natural gas price of $2.42/MCF. It does not include production costs, and as noted, does not include the recent Shell asset acquisition. 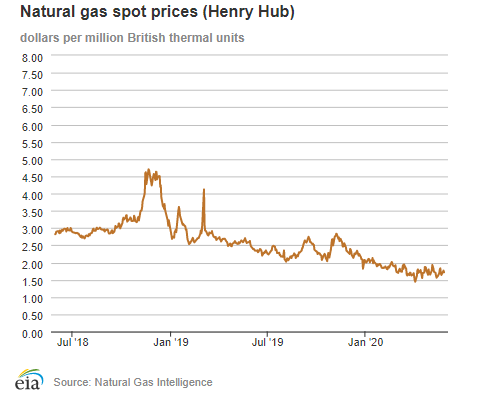 Meanwhile, the recent price for Marcellus natural gas at Tennessee Zone 4 was $1.38/MMBTU, a difference of $0.40/MMBTU. The price at the Dominion South hub, also a benchmark for Appalachian supply, was $1.46/MMBTU. Earlier this year, when prices were lower, producers – including NFG – shut in some production and may have to do so again.

The Energy Information Administration (EIA) in its May 2020 Short-Term Energy Outlook noted U.S. dry natural gas production is predicted to average 89.8 BCF/D in 2020, but that due to pandemic-caused manufacturing closings, U.S. consumption will be less at 81.7 BCF/D. While LNG exports took up some slack in early 2020, as noted they too are now down.

The EIA projects Appalachian (Marcellus and Utica) volumes to be 32.6 BCF/day in June 2020. 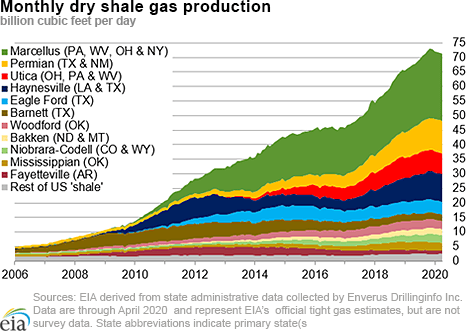 The map below illustrates the Marcellus formation. 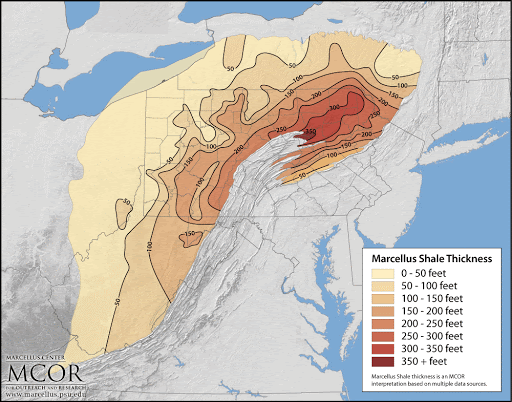 Credit: The Penn State Marcellus Center for Outreach and Research

In the Marcellus, gas-producing competitors also include Antero Resources (AR), Chesapeake (CHK), CNX Resources (CNX), Range Resources (RRC) and Southwestern Energy (SWN). The challenges these companies face can be seen not only in Shell’s sale of its assets to NFG, but also:

*Chesapeake is considered to be near bankruptcy; and

*Chevron’s (CVX) $10 billion 2019 write-down reflected in part a much lower valuation of its Appalachian gas assets.

Like Cabot Oil & Gas, with experience and ownership of infrastructure (gathering, pipelines, and storage) and its own gas utility, National Fuel Gas is better able to sell its natural gas than other producers.

The company’s most recent beta of 0.66 suggests the stock price moves with the market but less sharply.

Overall, the company’s mean analyst rating from seven analysts is 2.7, closer to “hold” than “buy.”

At March 30, 2020, NFG’s stock was held by institutions, some of which represent index fund investments that match the overall market. The seven largest institutional holders were State Street (NYSE:STT) (10.6%), Vanguard (9.8%), BlackRock (NYSE:BLK) (9.7%), JPMorgan Chase (NYSE:JPM) (5.1%), and three companies with between 3.4% and 3.7%: Gabelli Funds, Lsv Management, and Invesco.

A Note on Valuation

With an enterprise value $5.98 billion, NFG’s EV/EBITDA ratio is 7.7, below the preferred ratio of 10 or less and thus indicating a bargain.

The biggest negative risk is the worldwide energy demand contraction, and the pace and extent of recovery from the coronavirus pandemic shutdowns.

The company also has a relatively steep liability-to-asset ratio.

I recommend that dividend investors and those interested in moderate growth consider buying National Fuel Gas. Although in the challenging Marcellus gas business, its operations are well-positioned with upstream, midstream, and downstream – including a utility – segments. The timely purchase of Shell’s Appalachian assets is also a good strategic fit.

The company’s governance ratings are strong and it offers a 4.1% dividend.

I hope you enjoyed this piece. I run a Marketplace service, Econ-Based Energy Investing, featuring my best ideas from the energy space, a group of over 400 public companies. Each month I offer:

*3 different portfolios for your consideration, summarized in 2 articles, with portfolio tables available 24/7 to subscribers;

*3 public SA articles, for a total of 8 energy-related articles monthly;

*my experience from decades in the industry.

Disclosure: I am/we are long CVX. I wrote this article myself, and it expresses my own opinions. I am not receiving compensation for it (other than from Seeking Alpha). I have no business relationship with any company whose stock is mentioned in this article.

India should prioritise a denial strategy in the Indian Ocean