(Bloomberg) — Namibia expects its biggest oil discoveries since independence to help double its economy by 2040, Jennifer Comalie, chairperson of National Petroleum Corp. of Namibia, said in a Bloomberg TV interview. 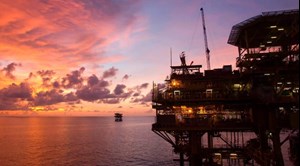 TotalEnergies SE in February said it had made a “significant” oil discovery off the coast of Namibia, three weeks after Shell Plc announced a find off the southwest African nation. Explorers have drilled more than a dozen exploration wells in search of oil and gas. Consultants Wood Mackenzie estimated the combined recoverable finds at almost 4 billion barrels.

“More than 30 years of exploration and we finally we hit the jackpot,” Comalie said in the interview at the sidelines of the Qatar Economic Forum on Tuesday, without giving a timeline for production. “At peak, these two discoveries could bring $5.6 billion to a very small economy.” TotalEnergies and Shell executives have warned that the discoveries still await an appraisal stage to accurately determine their size.

The $11-billion economy is banking on the discoveries to boost its budget and create more jobs in a nation with one of the world’s largest unemployment rates. With countries and companies pledging to hit their net zero targets around 2050, Namibia has about a decade to develop and make the most of the recent finds.

The oil and gas industry is also known for lengthy developments, particularly in areas that don’t have established infrastructure. In Uganda, development of major oil reserves first discovered in 2006 has only just started and the crude won’t reach international markets until 2025. Namibia plans on reaching production by 2028 if the process is accelerated.

The country also sees a “massive opportunity” in green hydrogen, Comalie said. Green bonds are being considered to fund projects that use renewable energy to produce hydrogen for export.

Qatar’s Ministry of Commerce and Industry, Qatar Investment Authority and Investment Promotion Agency Qatar are the underwriters of the Qatar Economic Forum, Powered by Bloomberg. Media City Qatar is the host organization.

Reducing light pollution has numerous benefits for the environment