(Bloomberg) — Libya’s oil production has almost fully halted as a political crisis leads to more shutdowns of ports and fields. 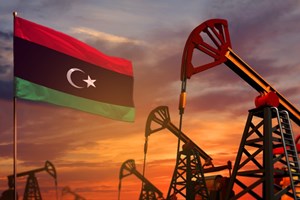 The OPEC member’s daily output — which averaged 1.2 million barrels last year — is down by about 1.1 million barrels, Oil Minister Mohamed Oun told Bloomberg on Monday. That suggests Libya is pumping only about 100,000 barrels a day.

The fall in supply will further tighten a global market that has seen crude prices jump more than 50% this year to around $120 a barrel. It’s already led to traders paying a higher premium for North Sea crude, which is similar in quality to Libyan oil.

“Almost all the oil and gas activities in the east of Libya are being shut down,” Oun said. In the south-west, the 40,000 barrel-a-day Wafa field is the only one with continuous production, he said.

The latest decline comes after protesters forced workers to shut down the key eastern oil ports of Es Sider and Ras Lanuf. Libya exported roughly 380,000 barrels a day of crude from the two facilities in May, according to tanker-tracking data monitored by Bloomberg.

Workers at Hariga, the second-largest port, were also urged to halt operations. That came as the 125,000 barrel-a-day Sarir field, oil from which flows to the port, was completely shut down, two people familiar with the situation said on Monday.

The three ports together handle about 70% of Libya’s total production. The country’s output had already halved to 600,000 barrels a day in mid-April after groups closed the major Sharara and El Feel fields.

“The risk of more widespread conflict remains elevated,” Francois Conradie, lead political economist at Oxford Economics Africa, said in a note to clients. “Even if there is no uptick in conflict, the oil industry is going to remain prey to interference from strongmen.”

Libya has been mired in strife since the 2011 fall of dictator Moammar Al Qaddafi. It’s facing a standoff between rival politicians, with Prime Minister Abdul Hamid Dbeibah resisting demands from some lawmakers to resign after they declared former interior minister Fathi Bashagha as premier in February. Bashagha has set up a new government in the city of Sirte following clashes in Tripoli, the capital, between militias loyal to him and others who back Dbeibah.

The North African nation was meant to hold a presidential election in December, but it was delayed with just days to go, dealing a blow to peace efforts. Creaky oil facilities, already struggling to maintain production, have been the target of protests in recent months.

Although the country is exempted from the Organization of Petroleum Exporting Countries’ system of production caps, the massive drop in its supply still feeds into the group’s weak performance. OPEC and its allies have failed to hit their output targets in recent months, giving consumers little respite from the soaring cost of fuel.

Last week, United Arab Emirates Energy Minister Suhail Al-Mazrouei warned that oil prices are “nowhere near” their peak. He cited an impending rebound in Chinese demand as it eases coronavirus restrictions, coupled with the supply constraints.

The new Gulf oil boom poses dilemmas for the west

The new Gulf oil boom poses dilemmas for the west