The White House and Jeff Bezos have renewed a spat over Joe Biden’s management of high inflation as the Amazon founder criticised the US president for calling on companies to cut prices at filling stations.

On Saturday, Biden demanded on Twitter that companies managing gas pumps decrease soaring fuel prices at “a time of war and global peril”.

“Bring down the price you are charging at the pump to reflect the cost you’re paying for the product. And do it now,” he wrote.

Later that day, Bezos posted in a tweet in response that inflation was “far too important a problem for the White House to keep making statements like this”.

“It’s either straight ahead misdirection or a deep misunderstanding of basic market dynamics,” said the world’s third-richest person.

Karine Jean-Pierre, White House press secretary, fired back on Sunday, writing on Twitter that oil prices had fallen approximately $15 in the past month while prices at gas pumps had “barely” dropped, adding it was a sign the market was “failing the American consumer”.

She added: “But I guess it’s not surprising that you think oil and gas companies using market power to reap record profits at the expense of the American people is the way our economy is supposed to work.”

It was not the first pointed exchange between Bezos and the White House. The billionaire lashed out in May at the Biden administration over the failed Build Back Better bill, which he believed could exacerbate inflation.

The proposed legislation aimed to increase taxes on affluent individuals and large companies to help fund spending on education, childcare and schemes to fight climate change.

The sharp rise in prices, which Biden has mainly blamed on Russia’s invasion of Ukraine, has become a hot-button topic in US politics ahead of midterm elections in November.

It has also exacerbated tensions between corporate America and some Democratic lawmakers, who have accused companies of price-gouging. But most economists argue that several factors have contributed to inflationary pressures, including a post-coronavirus pandemic bounce, bottlenecks in supply chains and government stimulus generating high demand, as well as the Ukraine war. 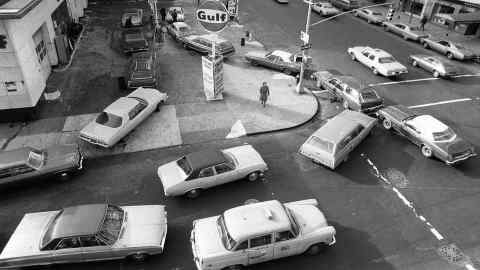 The spat between Bezos and the White House came as the businessman has ramped up his previously rare use of Twitter after stepping down as chief executive of Amazon last year.

Kirby added that the president had spoken honestly about efforts to bring gas pump prices down, including releasing 1m barrels of oil from the country’s strategic reserves.

Kirby added that before Russia’s invasion of Ukraine, Biden had been clear that supporting Kyiv would not be “cost-free to the American people”.

Brent climbs by over 3%, surpassing $80 a barrel