It’s Not The Heat, It’s The Headline Inflation


The headlines are stark: “National averages on gas have reached $5 a gallon – AAA and Gas Buddy say – and get ready for the number to keep climbing.” Meanwhile, 401k plans continue to get pounded as the stock market sinks.

It’s scary stuff, for sure. I don’t like it and neither should anyone else.

But over my 35 years as a trader, I’ve learned that no matter how scary the market gets (and this one’s a doozy), a look beyond the headlines is always worth the effort.

Inflation and The Weather Cliche

We’ve all heard the old cliche. And I bet, with some degree of shame, we’ve likely repeated it hoping no one is listening:

The ugly truth is that we all know that it doesn’t really matter whether it’s heat or humidity that’s making life difficult. It’s just hot. There’s nothing we can do about it. And we’re miserable.

The same applies to the current stock market and at the gasoline pump. In the end, it doesn’t matter why. It’s just happening. And our money, like gasoline that spills at the pump, is evaporating.

Roots of The Problem

But let’s see if we can gain some perspective.

The Federal Reserve is raising interest rates and may do so for a long time. And governments around the world are struggling to sort out the situation.

All of which is creating a self-fulfilling doom loop of lower highs and lower lows in financial assets, while the opposite has been the norm of late in commodities such as crude oil and gasoline.

Be that as it may, it doesn’t mean that from an investment standpoint we can’t try to understand what’s happening and act accordingly.

When In Doubt Look at the Market

Price charts are still underappreciated by the majority of investors who either don’t pay much attention to their holdings until they get their quarterly results from their broker, or focus on comments from “experts” who sometimes just get it plain wrong.

On the other hand, a price chart captures what’s happening at every given moment after the most recent price tick is updated. Moreover, as each price tick is added, the underlying price trend is revealed.

In today’s article, I will look at the one sector of the market which may hold the key as to what happens next, at least regarding the public’s perception of inflation: energy.

Let’s start with crude oil. The invasion of Ukraine by Russia led to sanctions on the latter and has created a volatile and dangerous supply crunch around the world. However, much of the price increase, at the moment, is due to shipping costs. And, although there’s plenty of oil in the ground, government policy, in the U.S. and the European Union, has curtailed the industry’s ability to restart drilling and exploration efforts that were cut back due to COVID. 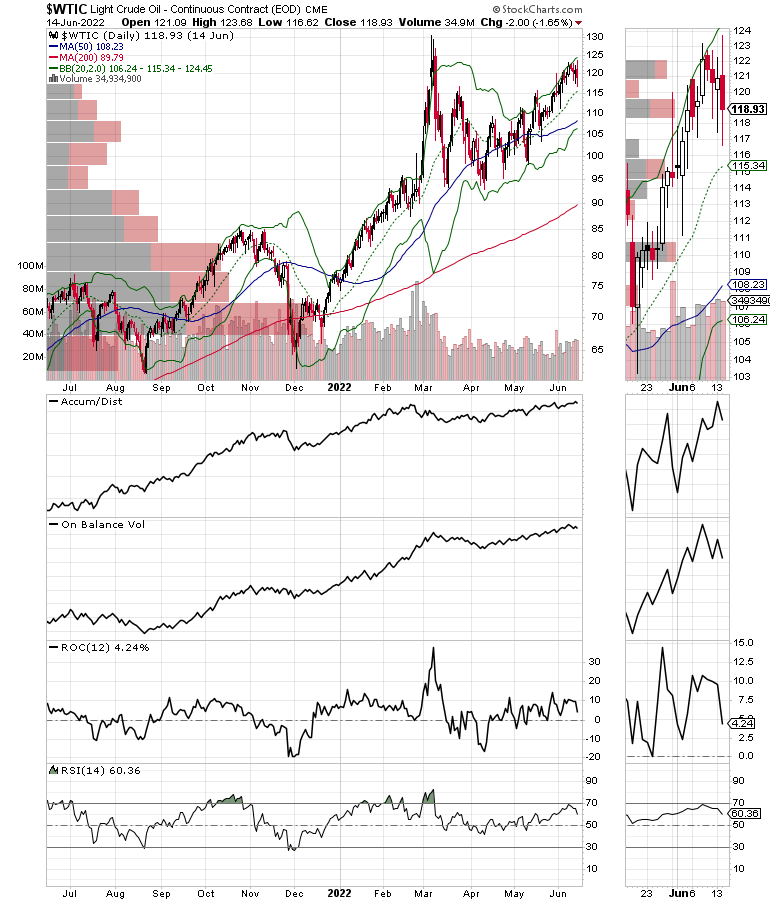 The net effect is that the price of West Texas US crude oil (WTIC) and Brent Crude (BRENT), the two publicly traded benchmarks, have skyrocketed. 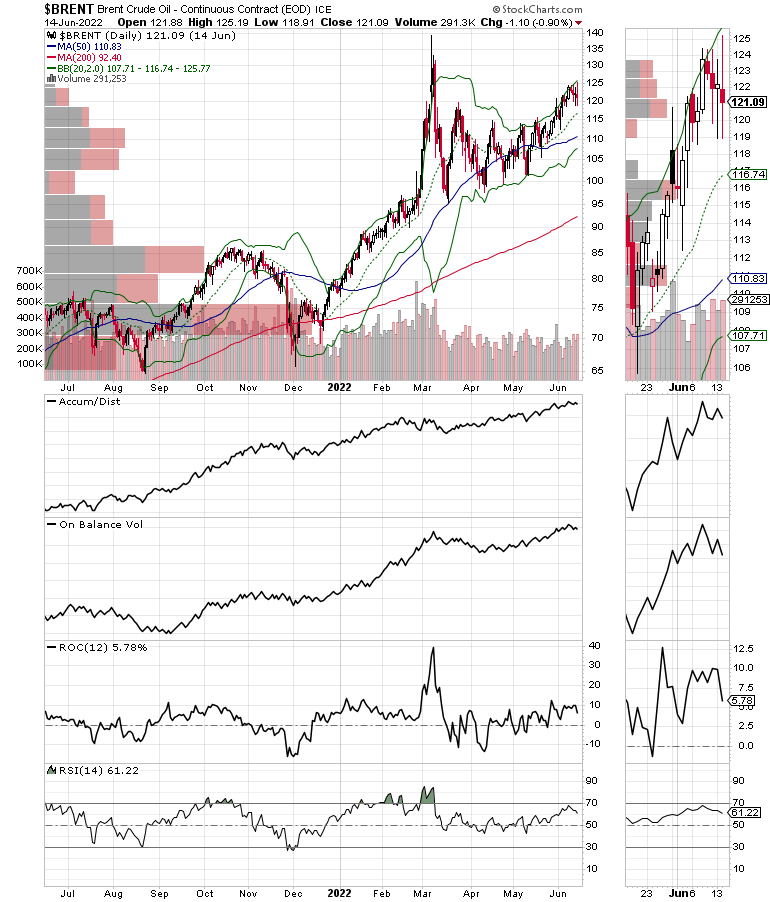 Interestingly, the price of WTIC historically trades at a discount to BRENT. But of late, both grades are trading nearly in a price lockstep, a sign that the global shortage of oil is ubiquitous. 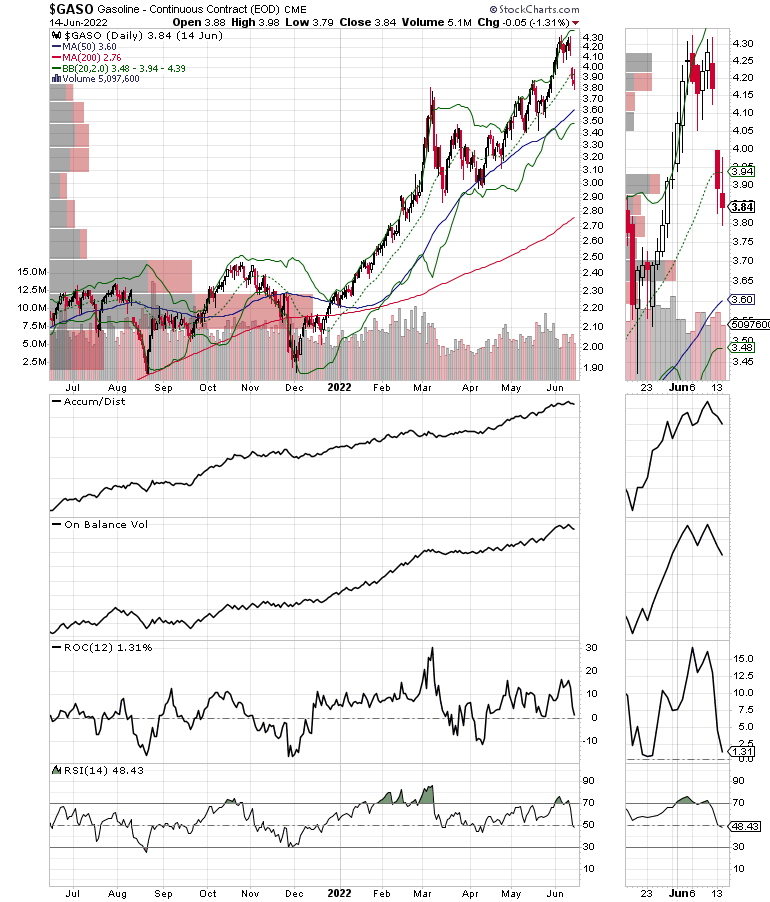 And of course, where consumers feel the pain is in the price of gasoline (GASO), which is now retailing at all-time highs, at around $5 per gallon in the U.S. and significantly higher in Europe.

But here is where it gets interesting. As the headlines blare about the situation, price charts are telling us that a pause in commodities is under way.

The price of gasoline in the futures and wholesale market has recently pulled back, maybe meaningfully, although it’s not apparent at the pump yet. Meanwhile, in the case of crude oil, we are seeing a slowing in the rate of its price rise.

I am certainly not predicting that all will be well any time soon. My point is only to note that the headlines and the market prices are rarely in sync. When the news is hot, there may be some headline inflation (puffery to sell newspapers) involved.

Moreover, when the headlines reach the point of calling for the end of the world, it often signals that a pause or a change in the actual price trend is imminent.

The Relative Strength Indicator (RSI) on all three price charts (WTIC, BRENT, and GASO) is hovering around 70. That’s overbought, meaning that there are now potentially more sellers than buyers in the market. As a reference, check out what happened in March when RSI for these three commodities rose well above $70 in the initial price frenzy.

Now, the overbought level hinted at by RSI is not apparent yet in Accumulation Distribution Indicator (ADI) and On Balance Volume (OBV), which are still in uptrends. These are measures of money flowing in and out of an asset.

But let’s look at the Volume by Price (VBP) bars on the left side of the price charts. These bars measure the importance of a price level. The bigger the bar, the more important the price level.

Specifically, when a price moves above or below a big VBP bar, such as what we saw in BRENT in September and December 2021 at both $70 and $85, it’s a signal that something meaningful has happened.

That suggests that the current prices in energy are vulnerable. Some traders have already made so much money in these markets that when the selling starts, they will run for the exits to preserve their profits.

Meanwhile others have bought above current prices and are now sweating the pullback. They will sell even faster if things turn south to cut their losses short.

Inflation is real and it’s a multifaceted and likely long-term problem. The price of crude oil and gasoline are certainly key contributors to the situation. Until the Federal Reserve signals that it is near a pause in raising rates, trading stocks will be difficult.

Yet, even though the core cause of inflation, too much money chasing too few goods, will be a problem for the Fed and global governments to address, the price of oil is a traditional supply-and-demand challenge that will be addressed by the markets.

At this point, even though energy prices are elevated, they are off their record highs.

I don’t know what will happen next. But I can tell you that the price charts will catch the next trend before the headlines do.

A Note From The Publisher: Dr. Joe Duarte just gave you valuable insights, but Investing Daily is home to many other seasoned experts.

Consider our colleague Robert Rapier, who boasts a track record of generating outsized income regardless of market conditions.

As the chief investment strategist of Rapier’s Income Accelerator, Robert has devised an investing method that allows him to extract multiple payments from the same stock over and over again, whether the broader market is going up, down or sideways. Robert calls it his “dividend multiplier” and it has reaped steady riches for his followers. Click here to learn more.

Russian oil is already significantly cheaper than oil from other sources, and Moscow has said will stop selling to countries...

Brent and WTI in line for first weekly gain in fiveOil prices set to fall about 23% over the quarterOPEC+...

Israel stocks higher at close of trade; TA 35 up 0.08% By Investing.com

Beauty and devastation of women’s art from Latin America