Leading downstream oil giant Phillips 66 (NYSE:PSX) had its worst year ever. The company had turned a profit every year since spinning off from ConocoPhillips in 2012. That is, until the COVID-19 pandemic crippled its refined product and chemicals demand, resulting in a $4 billion unadjusted loss. In 2020, the company reported record-low revenue and negative free cash flow (FCF), and added $4 billion in debt to its balance sheet.

Given this terrible performance, investors may be scratching their heads as to why shares of Phillips 66 are up around 20% so far this year. Let’s dive into Phillips 66’s refining business to determine what went wrong in 2020 and what could go right in 2021. 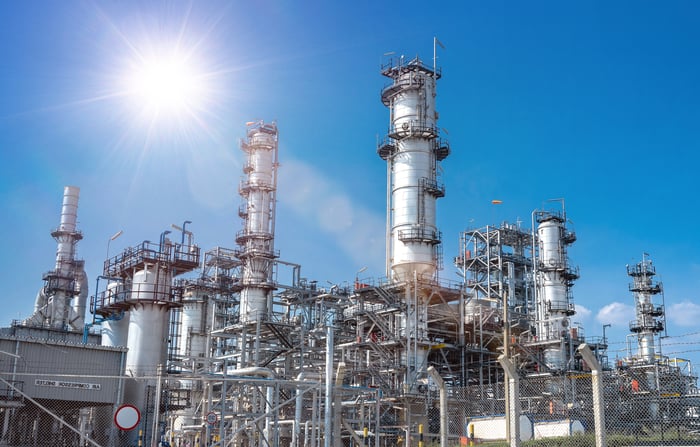 The short answer as to why shares of Phillips 66 have been going up has to do with expectations. West Texas Intermediate (WTI) crude oil, the commonly quoted benchmark in the U.S., just passed the $60 per barrel threshold, the highest point in over a year. An expected uptick in oil and gas demand coupled with lower supply is buoying oil prices. Supply is lower because virtually every major oil producer curtailed some production in 2020 in the face of lower oil prices. There’s also the recent winter freeze in Texas, which took even more production offline in the short term.

Higher oil prices mean higher input costs for Phillips 66, which seems like a bad thing. This is because refiners take crude oil and turn it into useful products, so lower oil prices tend to mean cheaper operating costs. However, looking at oil prices alone can be misleading. Refining results are influenced by loads of factors like throughput, feedstock costs, turnaround activity, and other costs. But the two most important metrics are realized refining margin per barrel and crude utilization rate.

Refining margin per barrel is simply the value of the products made from a barrel of oil relative to the cost of the unrefined crude oil. A high refining margin means more profit for refiners. Crude utilization rate is the amount of output compared to the total potential output that refineries are capable of. Again, a high number means refineries are operating closer to capacity — a good sign that demand for their services is high. 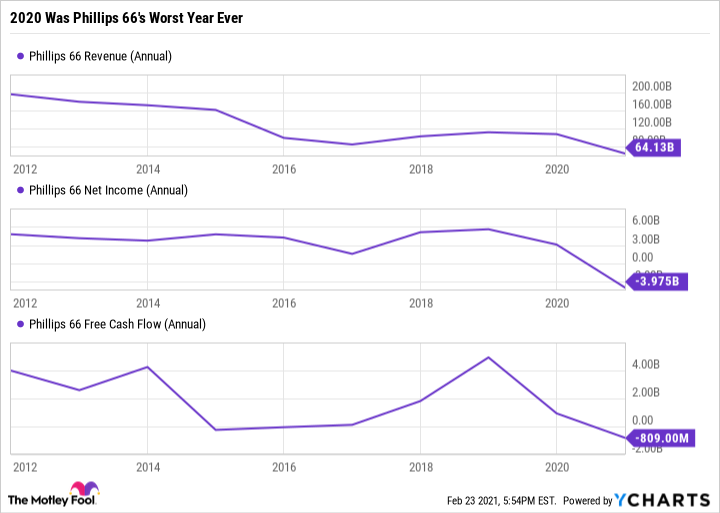 In Phillips 66’s case, the main reason its 2020 performance was so bad is because its refining margin per barrel and crude utilization rates were drastically below historic levels. And by drastically, I mean a $6.15 billion unadjusted loss compared to a 2019 profit of $1.99 billion and a 2018 profit of $4.54 billion. Refining tends to be the oil company’s largest and most profitable segment, but it was its biggest downfall in 2020. In fact, the rest of the company’s business segments — midstream, chemicals, and marketing and specialties — had a combined 2020 adjusted net income just 10% lower than 2019.

Looking at the figures, it’s clear that Phillips 66 doesn’t care about high oil prices as long as its business is booming. Even with historically low WTI prices averaging under $40 in 2020, it’s no surprise that Phillips 66 struggled mightily given a good deal of its refineries weren’t operating and profit margins were slim. Its fourth-quarter utilization rate was just 69%, the lowest of the year. Its fourth-quarter refining margin was just $2.18, which was a slight improvement from the third quarter but lower than the second quarter.

Limping toward the finish line

After a disappointing third quarter, Phillips 66 had been hoping its figures would improve. Instead, the fourth quarter was the largest adjusted quarterly loss in refining for the year. The company’s lackluster performance is contrary to other leading energy and industrial stocks that saw their performance improve as the year progressed.

It could take time for Phillips 66 to adjust to higher oil prices. In addition to the points discussed earlier, rising crude prices can be a detriment to refiners in the short term. Prices for refined products rarely move in tandem with crude prices, especially if crude prices dramatically rise or fall in a short period of time. Phillips 66 and other refiners will need to clear their existing inventory, thereby lowering supply, so that prices for their products rise along with crude. In the meantime, refinery margins will likwly be squeezed.

Hope on the horizon

Phillips 66 is still a long way from rebounding to its 2018 and 2019 levels, but there’s an indication that the downstream industry is improving. The U.S. Energy Information Administration tracks average crude utilization rates. The January average was just shy of 82%, the highest since late March 2020. The first half of February averaged 83%. These improved rates are a sign that the industry is ramping up refinery usage in response to higher demand. This is the good news that Phillips 66 has been waiting for since the pandemic began. 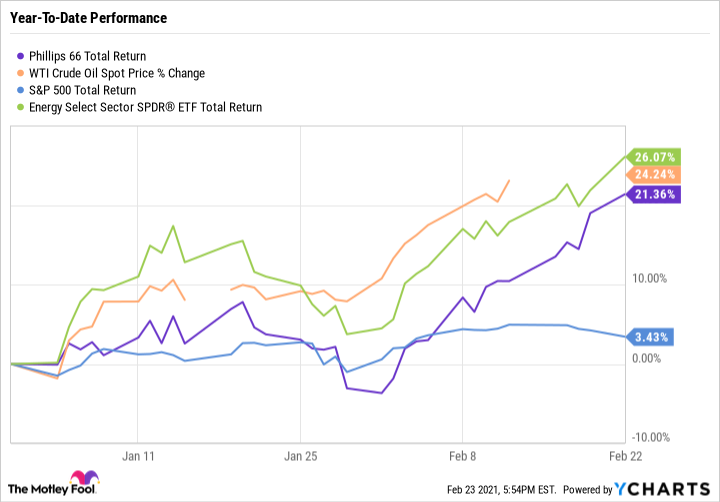 Shares of Phillips 66 sold off mightily in 2020. While the stock looked like a bargain not too long ago, a 40% surge in three months makes it less attractive given its poor results and unproven 2021 recovery. The leading indicators bode well for a much-improved first quarter, but the company isn’t out of the woods yet. Phillips 66 is unlikely to raise its dividend or reinstate its share buyback program anytime soon. And its budget of $1.7 billion ($1.1 billion for sustaining operations and $600 million for growth initiatives) is much lower than its usual spending.

In order to fund its $1.6 billion annual dividend obligation, the budget, and begin to pay down the $4 billion in debt it added in 2020, Phillips 66 will need to seriously improve its FCF and notch consecutive good quarters. Phillips 66 has a hefty 4.4% dividend yield, well above the market average. But given the stock’s climb and the looming uncertainties, it’s probably best to take a wait and see approach with Phillips 66 at this time.

This article represents the opinion of the writer, who may disagree with the “official” recommendation position of a Motley Fool premium advisory service. We’re motley! Questioning an investing thesis — even one of our own — helps us all think critically about investing and make decisions that help us become smarter, happier, and richer.

Microplastics Are Wafting in on the Sea Breeze – EcoWatch

Stocks rallied Monday to start the new month and quarter, as Treasury yields eased from levels not seen in roughly...

The stock price of Northern Oil & Gas (NOG) increased by 1.56% in the most recent trading session. This is...

A rating of 95 puts Cheniere Energy, Inc. (LNG) near the top of the Oil & Gas Midstream industry according...

Microplastics Are Wafting in on the Sea Breeze - EcoWatch