U.S. Naval Forces Central Command released video of a new close encounter between Iranian speed boats and U.S. Navy ships transiting the Strait of Hormuz yesterday, June 20. In the video, one of the fast boats can be seen coming within 50 yards of one of the U.S. vessels before turning sharply and when it comes alongside one of the three Iranians aboard appears to be holding a video camera filming the incident.

Three fast inshore attack craft from Iran’s Islamic Revolutionary Guard Corps Navy (IRGCN) were seen in the area around the U.S. vessels and approached the vessels. The U.S. is reporting the interaction lasted one hour and ended when the Iranian vessels departed the area.

According to the U.S. Navy, the Iranian vessels were “operating in an unsafe and unprofessional manner.” A spokesperson for the U.S. Navy said, “The IRGCN’s actions did not meet international standards of professional or safe maritime behavior, increasing the risk of miscalculation and collision.”

The U.S. vessels involved in this latest incident between the Navy and the Iranians were the patrol coastal ship USS Sirocco and the expeditionary fast transport ship USNS Choctaw County. The U.S. Navy reports they were conducting a routine transit in international waters when the Iranians approached.

“One of the IRGCN vessels approached Sirocco head-on at a dangerously high speed and only altered course after the U.S. patrol coastal ship issued audible warning signals to avoid a collision. The Iranian vessel also came within 50 yards of the U.S. Navy ship during the interaction, and Sirocco responded by deploying a warning flare,” the U.S. Naval Forces Central Command said in their statement.

The incident follows a lull in these types of approaches but Iran has a history of similar interactions with American vessels in the region. In April, the U.S. Navy released footage showing Iranian fast boats repeatedly approaching and crossing the bow of two U.S. Coast Guard vessels on patrol in the Arabian Gulf. A year earlier, eleven Iranian attack boats conducted “dangerous and harassing” approaches near six American military vessels in the northern portion of the Persian Gulf. 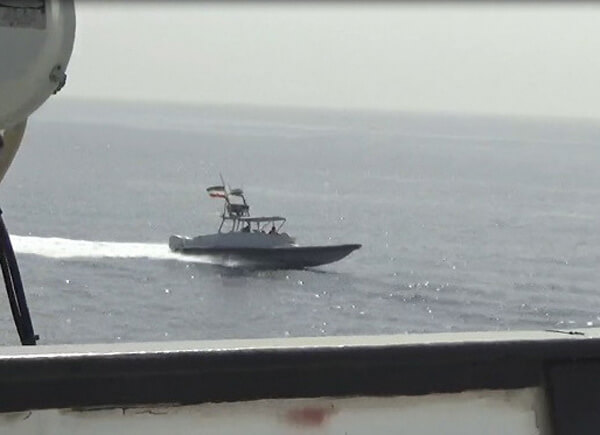