How Long Will Diesel’s ‘Free Lunch’ From Oil Rally Last?


We’ve all heard the saying: “There ain’t no such thing as a free lunch.” It conveys a range of ideas that basically mean the same thing: nothing in life is truly free and if you want something, you have to work for it. British economist David Smith has even written a “Free Lunch” book which says that people shouldn’t be expected to pay too much for their potatoes when there are too many potatoes in the market. I hope you’ve digested that idea because I want you to tell that to buyers of .

New York-traded futures of Ultra Low Sulfur Diesel—which until 2013 was known as Heating Oil—are up a whopping 40% over the past three weeks, hovering at 90 cents a gallon versus the 65 cents three Fridays ago. U.S. stockpiles of diesel have, meanwhile, risen 18 million barrels in the same duration, or the equivalent of 230% compared to the build seen in the week prior to those three. 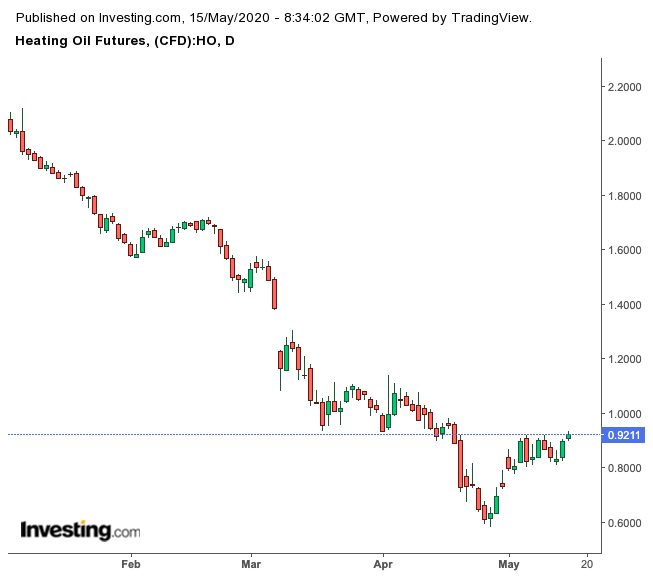 The eye-watering builds in diesel coincide with the sudden collapse in trucking activity three weeks into the coronavirus lockdowns in the United States, as logistics and health-related issues hit deliveries by companies such as Amazon (NASDAQ:), United Parcel Service (NYSE:) and FedEx (NYSE:). Even now, with most of America having reopened for business, many people continue working remotely, causing buses and trains to run on lighter schedules which means far less diesel consumption than four months ago.

Tagging Along With Crude, Gasoline Rally

So, why the sudden rebound in diesel futures now? To hear it from energy market bulls, diesel has been swept along with crude oil and gasoline futures, which have also rallied hard over the past three weeks, as bidders anticipated demand in the summer and beyond. That’s like paying top dollar today for a cruise that you might feel comfortable boarding in August. Doesn’t sound like that great a deal, does it?

For a more fundamental perspective, U.S. crude’s are up after a 745,000-barrel drop in last week versus expectations for a 4.2-million-barrel build.

Separately, crude stockpiles also fell 3 million barrels at the Cushing, Oklahoma holding center for oil delivered against expiring contracts of WTI. In recent weeks,  Cushing stockpiles were growing as fast as 5 million barrels per week in recent weeks, triggering speculation that the 76-million-barrel capacity hub will run out of space before the end of this month. Fears of a Cushing max-out were what drove WTI futures to their first ever-negative pricing in late April.

Gasoline Demand Both Empirical and Anecdotal

In gasoline’s case, key New York-traded are poised to end this week down 1%, after gaining a combined 44% in two weeks prior. Fundamentally, have been the outlier among all energy components, with a net stockpile draw of around 5 million barrels the past five weeks compared to forecasts for a net build of more than 11 million. 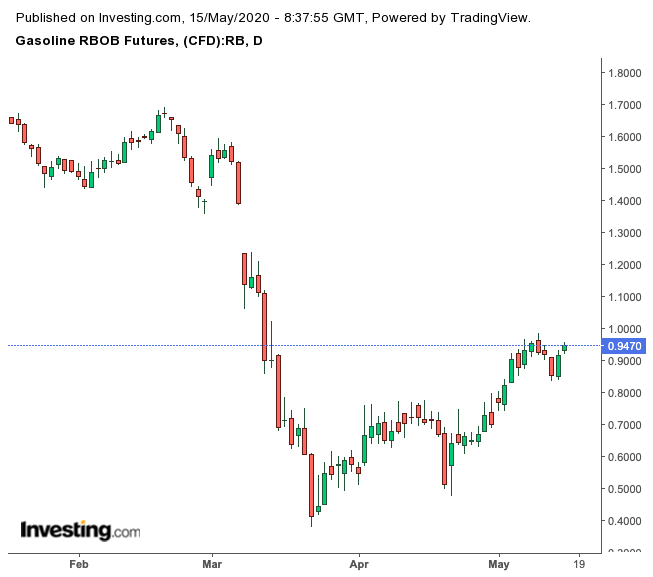 Now enter diesel futures, which rallied nearly 8% on Thursday alone, almost matching the rally in WTI. This is despite data from a day earlier showing rose by 3.5 million barrels last week versus expectations for a build of about 2.9 million barrels.

To be fair, diesel futures have only started rallying since the start of May, rising 26% month-to-date after plunging 64% between January and April. The rebound, therefore, provides some relief from a miserable first quarter, especially for those who got into long diesel positions in late March as U.S. trucking activity picked up briefly during the coronavirus lockdowns.

“It is coming at a time when demand for diesel has just cratered in the U.S. Distillate exports to Mexico have plunged and Latin America is not buying. There’s no justification for these prices.”

On a more granular level, the rally is drawing little support even from refiners, who have seen the diesel crack—or profit margin for turning out the transportation fuel from crude—fall to $11 a barrel from a high of $19 in December. The gasoline crack remains healthy at around $15.

Typically, refiners use the 3:2:1 structure for crack spreads where for every three barrels of crude processed, two are turned into gasoline and one into distillates, which include diesel, kerosene or jet fuel, hydrocarbon gas liquids and residual fuel

Weak refining margins now for anything other than gasoline could result in fewer barrels being turned into diesel, evidenced by last week’s drop of nearly 5 million-barrels-per day in U.S. distillates production. In contrast, refinery output for gasoline last week rose by 7.5 million barrels per day.

While diesel was an initial savior for refiners during the COVID-19 crisis as global travel restrictions took their toll on jet fuel and gasoline, “the pain is now extending to the diesel/gasoil complex, prompting a swell in middle distillate inventories across all major refining hubs and a deterioration in crack spreads,” New York-based Energy Intelligence said in a note.

“The dilemma for refiners is that healthy diesel cracks so far have been supported by lower crude runs, not by higher demand. Among all refined products, middle distillate inventories—the bulk of which is diesel—have since shown the highest buildups in all regions.”

Still compared to the market in Europe, U.S. diesel had been shielded somewhat by demand from the agricultural sector during the spring season that partly replaced heating oil demand lost during the winter, Energy Intelligence said.

“A growing jet overhang has depressed prices and encouraged refiners to reuse the finished fuel,” it said. “Yet, there is a technical limit to repurposing jet kerosene as diesel.”

So, what’s the way forward for those still bidding up diesel?

“Stay in and may some hay while the distillates’ sun is still shining, or get out now before you’re left holding the bag at the end,” said Kilduff.

“I gave this diesel rally a few more weeks until the end of the month or so. By then, we must see some real demand. Otherwise, reality will set in.”

The Global Energy Transition Has A $22 Trillion Problem