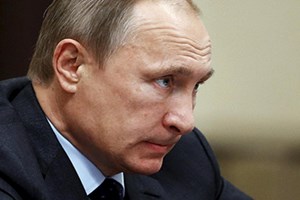 (Bloomberg) –Rising oil prices and a weak ruble could provide the Kremlin with as much as $33 billion in extra cash for social spending this year, giving Vladimir Putin the financial wherewithal to help head off growing public discontent.

Thanks to a 21% price surge this year, Russia now receives more rubles per barrel of Brent crude than any time since mid-2019. If oil remains high, the windfall would be enough to allow the budget to receive an extra 2.3% of gross domestic product, according to Sova Capital in Moscow.

“It’s very important to stimulate business and consumers whose disposable incomes were down last year,” said Artem Zaigrin, chief economist at Sova Capital in Moscow. “Without additional funding, there are risks that the economic recovery will fade.”

Amid growing tensions with the West and fears of new sanctions, Putin has been reluctant to spend heavily in recent years, even during the pandemic. Stagnant living standards have helped fuel public anger at the Kremlin, which has boiled over into the biggest nationwide protests in years and poses a challenge for Putin’s ruling party in parliamentary elections this fall.

So far, the Kremlin says it aims to stick with its earlier plan to cut spending this year and next, reversing most of the pandemic increase, in order to limit borrowing, as well as vulnerability to more Western sanctions on its debt. Any oil windfall usually goes straight to a rainy-day fund.

But after a decade of stagnating incomes, pressure is growing to spend more money. Just last week, the Kremlin changed the rules so it can add expenditure to the budget without approval from parliament.

Non-energy revenue was higher than expected last year after Russia experienced one of the smallest contractions of major economies, so there will also be leftover budget money to spend in 2021.

It’s premature to start thinking about extra spending since it isn’t clear yet if oil prices will stay high, said Alexandra Suslina, a budget specialist at the Economic Expert Group, a Moscow think tank. “It seems like a populist move ahead of the elections,” she said.

The Russian president may announce new spending measures at his annual address to the nation expected in the next few weeks. So far, however, his spokesman has denied reports of plans to announce more expenditures.

Electric cars will speed up depreciation of everything GM owns — Quartz

Electric cars will speed up depreciation of everything GM owns — Quartz

All Electric Semi Truck Models in One Graphic

The World Has Too Many Oil Refineries