Geopolitics And The ‘Great Reset’ In Sri Lanka| Countercurrents 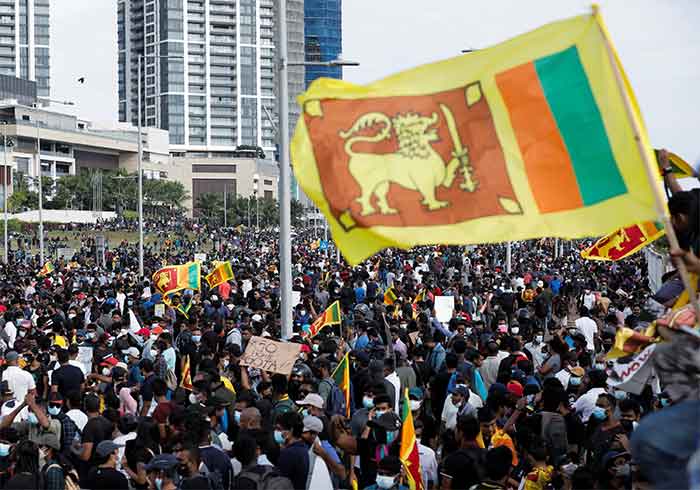 “But to watch cricket, there has to be a country left for us to watch it in, no?” A fan at the Galle Test Match that ended with an innings victory for Sri Lanka. July 11, 2022

Spirits were high on July 11 when the Sri Lankan cricket team beat the visiting Aussies by an innings even though the country was in its worst economic crisis ever, due to a lack of Dollars to buy fuel caused by an international Sovereign Bond (ISB), debt trap and Staged Default.

The cricket victory followed a magical weekend in which the Aragalaya, or peoples’ struggle, exceeded all expectations, staging multiple coups to peacefully claim both the Presidential Palace and the Prime Minister’s official residence. The island’s President and PM were unseated by massive waves of protestors without a single person killed in gunfire. Later the protestors cooled off in the Presidential pool and had impromptu concerts celebrating what appeared to be a successful regime change operation.

There’s never a dull moment in this strategically located emerald island that is perpetually in the cross hairs of big power rivalry! Even though the confrontations in Colombo were replete with barricade breaches, water cannon charges and tear-gas sprayed, the police and military conceded to peoples’ power after brief stand-offs with unarmed protestors.

This was also on the urging of an eminent group of religious leaders in this multi-faith land of Buddhists, Hindus, Muslims, Christians and myriad local gods, spirits, and sentient beings.

Fewer people have died in a 100 days of massive protests in Sri Lanka than in a single day of gun violence in the United States, although the island is invariably portrayed as a space of (ethno-religious) violence in media, expert analysis and ethnography. This speaks volumes about where violence springs from in the global military business industrial complex.

The bright spot was that the Sri Lankan armed forces had demonstrated that they had little interest in military takeovers for foreign-backed dictators despite being trained in “inter-operability” by various Big powers fishing in the Indian Ocean! This was another cause for hope, peace, DEBT JUSTICE, debt cancellation and victory in International Monetary Fund (IMF) talks– if only the external actors staging the crisis would let up!

Although no one has been killed during protests, the new acting President came to power in a lightening-strike Arab Spring regime change operation on May 12th during an island wide curfew with military was on the streets. Some of the big powers fishing in Sri Lanka’s troubles waters have a bad habit of installing chosen Dictators in strategic countries.

Ranil Wickramasinghe who lost his parliament seat and decimated his own political party at the last elections, and whose house was partially burned by protestors, is now Acting President! He is the Chief architect of the Central Bank Bondscam in 2015 that opened the door to vulture funds like Blackrock that engage in reckless lending and odious debt that has cause the Debt trap, and has never made a secret of his fondness for the West.

Protestors who want him out, question Wickramasinghe’s legitimacy and suitability to represent the people of Sri Lanka’s interests in negotiations with the IMF and US-based ISB traders. He has termed the protestors “fascists” and given all power to the military to do whatever it takes to maintain law and order and protect the Constitution! So, the scene is now set for a deadlier turn as the protestors have vowed to keep protesting, as an Indian Ocean war game heats up.

Three layers to the Crisis: Political, Economic and Geopolitical

It is clear that there are three layers and dynamics– economic, political and geopolitical– to the Crisis in Sri Lanka.

Although least discussed, geopolitics would likely determine the outcome of compounding crises in the country as a new Cold War hots up: Last week, Vlodimir Zelinski, Ukrainian President beloved of the Corporate Media that crafts the narrative weighed in on Sri Lanka at a Global Leadership meeting in Seoul, Korea, where he claimed that Russia was the cause of the island nation’s unrest!

China is routinely blamed for Sri Lanka’s U.S-based ISB debt trap and Russia for the island’s fuel crisis in both global and local media.

Zelinski did not mention two years of Covid-19 lockdowns and related economic and institutional debilitation as part of the great reset ‘shock doctrine” and Digital Colonialism to enable what Naomi Klein has termed “humanitarian disaster capitalism”, or the fact that the Weaponization of the US dollar with sanctions had ruined many countries. But this may be back firing as London-based economist Michael Roberts noted: “the dollar’s decades-long dominance has placed America in a strong position to dictate the terms of trade and finance for the last 70 years, but its dominance has been waning gradually”. More countries are de-dollarizing at this time.[i]

Zelinski obviously had no idea that Sri Lanka’s biggest problem was a shortage of “exorbitantly privileged’ US dollars due to International Sovereign Bond (ISB) debt trap—a result of odious debt owed to US and EU vulture funds like Black Rock that received huge US-Government Covid-19 bailout funds to debt-trap and asset strip in countries like Sri Lanka. This is what has triggered the Default and fuel shortage in strategic Sri Lanka at the center of Indian Ocean Sea Lanes of Communication– so the IMF could enter the fray.

Zelinsky appeared to be quoting a disingenuous comment made at an international panel discussion focused on “Preventing Global Hunger and Famine”, by Sri Lanka’s Acting President Ranil Wickremesinghe, who said the island nation’s political turmoil is a result of the global food shortage and fuel crisis brought on by the Russia- Ukraine war.[ii]

The Financial Times noted recently that “Western nations have introduced unprecedented financial sanctions on Russia, including on the country’s central bank, which have the potential to decimate its economy. Experts say they amount to full-scale financial warfare of an unheard-of nature and scope.[iii] While the dollar has been weaponized against sanctions hit Russia, Sri Lanka too is starved of Russian oil seemingly to deepen the crisis ex poste facto the default?!

Indeed, as a number of analysts have noted, US-led NATO sanctions on big oil producing countries like Russia, Iran and Venezuela and speculation by traders in commodities futures are the main source of the current global fuel trade disruption, related food shortages and soaring oil prices! Oil companies meanwhile have never made more profit, just like big Pharma companies did during Covid-9 lockdowns and mass injection campaigns.

Who said “Cricket is the Opiate of the masses of South Asia?” QUAD cricket teams from India, Australia (and now Pakistani), have played flood-lit matches despite power outages in Sri Lanka in the past two months to keep the natives entertained and distracted from the Big Picture – geopolitics and great power contest in the strategic Indian Ocean island as the crisis unfolds! Of course, the corporate media that crafts the narrative also helps.

The last ship bringing Russian oil to the Sapugaskanda oil refinery docked in the Colombo Port, South Asia’s busiest, at the end of May, after which the US Marines have been conducting Sea Vision training in Sri Lanka, as oil tankers that were due in the months of June-July in the oil staved country disappeared into thin air like the dollars paid for them via cyber hacks of data on the Government Cloud, as happened to the National Medicines Regulatory Authority during a Covid-19 injection purchasing spree in 2020?!

The Eagle had landed with the IMF team and “special US Advisors” in town with Lazard, Clifford and Chance representing bond traders to bailout ISB holders? Was the disappearance of ships bring Russian oil and gas to the strategic island for 6 weeks in June-July and compounding ex post the staged default linked to the fact that US Department of Defense “Sea Vision” operations were on-going with the Sea Vision Technical Assistance Field Team [iv]?

A Russian Aeroflot Airlines plane was also mysteriously grounded at the BIA International Airport in a scenario of Lawfare. Aeroflot suspended all flights to Sri Lanka after a court ordered the seizure of one of its Airbus A330s on June 2nd. The case was dismissed a month later but the episode seemed designed to disrupt relations between the two countries and impede the possibility of fuel deliveries from Russia which has de-dollarized and does not take US dollars.

As citizens died in petrol queues, Prime Minister Wickramasinghe stated on June 10th: “If we can get oil from any other sources, we will get from there. Otherwise [we] may have to go to Russia again”.[v] Wickramasinghe was clearly waiting for the IMF and Washington’s permission to buy oil from Russia!

Thus, the staged fuel-crisis, a policy choice of the pro-US regime in Colombo reached another milestone: In the first week of July 120 flights to the island were diverted to India, effectively “islanding” and marooning the strategic country from the rest of the world in the midst of a news blackout and a de facto fuel embargo on the island at the center of the Indian Ocean, now known as the “free and open Indo-Pacific”![vi]

Fuel and News Embargo: The First Domino to Fall?

While Indian media carried the story about 120 planes that were diverted to Kochi and Thiruvanathapuram airports from Sri Lanka purportedly to help the fuel-starved island at the center of the Indian Ocean after ships bringing oil vanished into thin air, the local and global corporate media that crafts the narrative in the country were silent about this. Failure to publish geopolitical analysis is often attributed by to a shortage of paper and news print, lately!

Is Sri Lanka the first domino to fall in America’s mythical ‘free and open Indo-Pacific? Would the Quadrilateral Group (QUAD), enable a de facto cyber, maritime trade fuel, and News, embargo to starve the island’s economy from Russian oil, deepen the debt-trap and enable and IMF to set economic and trade policy in this island at the center of the Indian Ocean? “It is well known that “the United States bears a good share of responsibility” for increasingly weaponising trade among most countries” wrote Dr, Anis Chowdury recently in a much quoted article.[vii]

The elephant in the room of Sri Lanka’s spiraling crisis appears to be balanced analysis and news of Geopolitics in the IOR and the Covid-19 induced ‘Global Reset’ to benefit the global corporates backed by the NATO-QUAD military business industrial complex.[viii]

By Alex Longley and Sherry Su (Bloomberg) –With soaring shipping costs comes soaring bills for ships doing nothing. In the oil-tanker...

TEHRAN – The chief commander of the Navy announced on Tuesday that Iran will unveil for the first time a...

Will shipping noise nudge Africa’s only penguin toward extinction?

The African penguin (Spheniscus demersus) is expected to go extinct in the wild in just over a decade, largely due...