Fire at US natural gas plant deals blow to exports


One of the biggest US liquefied natural gas plants will be closed for at least three weeks after an explosion, dealing a blow to exports at a time when the industry is trying to boost supplies to Europe.

Freeport LNG said on Wednesday that it had been forced to halt its operations, which account for almost a fifth of US liquefaction capacity, a process by which natural gas is supercooled and loaded on to tankers for delivery overseas.

“As a result of today’s fire, Freeport LNG’s liquefaction facility is currently shut down and will remain shut down for a minimum of three weeks,” the company said.

US natural gas prices fell sharply following the incident as traders fretted over the loss of a significant slice of the market. US futures for July delivery were trading at about $8.17 per million British thermal units on Wednesday evening, down 12 per cent from Tuesday’s settlement price, as traders contemplated domestic supplies being trapped onshore.

The Freeport terminal’s three trains have the capacity to process 2.1bn cubic feet of natural gas per day. That represents about 17 per cent of total US liquefaction capacity of 13bn cu ft/d and 2 per cent of the country’s total natural gas production.

The cause of the explosion and extent of the damage remained unclear on Wednesday night. Freeport LNG confirmed “an incident” had occurred at about 11.40am local time, adding that there had been no injuries and there was no risk to the surrounding community. It declined to provide further details.

Located on the Texas Gulf coast, Freeport LNG is one of just seven terminals operating in the US, all of which have been running flat-out to supply shipments of fuel to a tight global market.

The US, the world’s biggest natural gas producer, is trying to increase exports to Europe, as the continent seeks to cut its dependence on Russian imports. 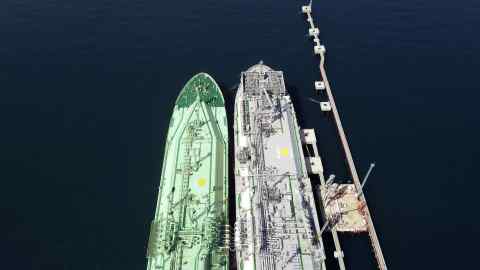 Under a deal announced by President Joe Biden and European Commission president Ursula von der Leyen, the US pledged to ensure an additional 15bn cu metres reaches Europe this year. Brussels said it would aim to increase annual demand for American LNG by 50bn cu m, equivalent to 4.8bn cu ft/d, by the end of the decade.

The optimistic demand outlook has sparked a flurry of investor interest in the sector. Michael Smith, Freeport LNG’s chief executive, told the Financial Times in April that “the future for US LNG is off the charts”.

The local police department could not be reached for comment regarding Freeport LNG. In a statement carried by local media, law enforcement said the facility had experienced “some sort of explosion” but that there was no evacuation under way.

Seven stowaways and a hijacked oil tanker: the strange case of the Nave Andromeda |

Seven stowaways and a hijacked oil tanker: the strange case of the Nave Andromeda |