The U.S. Energy Information Administration (EIA) said it would report two weeks’ worth of petroleum supply/demand data on Wednesday following a burst in power that damaged the agency’s hardware and forced the postponement of several reports. 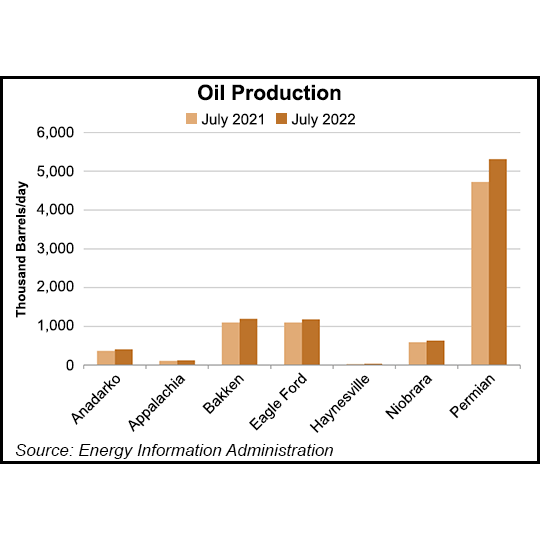 EIA had postponed several other regular reports, though it was able to publish last week its natural gas storage assessment for the period ended June 17. Its gas inventory print for the week ended June 24, as of Tuesday, was on schedule to be released Thursday at 10:30 ET as originally planned.

In its latest published WSPR, EIA said U.S. oil production climbed to 12.0 million b/d for the week ended June 10, up 100,000 b/d week/week. It marked the first increase in five weeks after modest bumps earlier this year.

U.S. output, however, remained more than 1.0 million b/d below the pre-pandemic peak reached in early 2020. Producers are trying to walk a fine line between meeting the global need for more oil and investor demands for elevated stock buybacks and dividend hikes as well as politicians’ calls for more investments in renewable energy.

Total petroleum demand has seesawed this year because of price spikes on a week/week basis, but it is up overall this year.

But over the four-week period ended June 10, consumption averaged 19.8 million b/d, up 2.3% from the same period last year.

U.S. commercial crude inventories, excluding those in the Strategic Petroleum Reserve, stood at 418.7 million bbl at June 10, about 14% below the five-year average.

Separately, OPEC-Plus is scheduled to meet Thursday to agree on production targets.

When the cartel met last month, it agreed to increase production in July and August by 648,000 b/d, advancing a previously planned increase for September. It marked a notable increase from the roughly 430,000 b/d jump it targeted for June.

Nov 25 (Reuters) - The energy ministers of Saudi Arabia and Iraq met on Thursday and stressed the importance of...

© Reuters. By Barani Krishnan Investing.com -- A lost opportunity for the West to add to Vladimir Putin’s ire and...

US stocks ticked higher on Tuesday as traders kept close tabs on the Covid-19 situation in China and the oil...

The UAE has reiterated that it has not been in any discussions with OPEC members to change the existing agreement,...

Crude oil price at its lowest?