Dispatch from Abu Dhabi: How to reduce carbon emissions without blocking progress 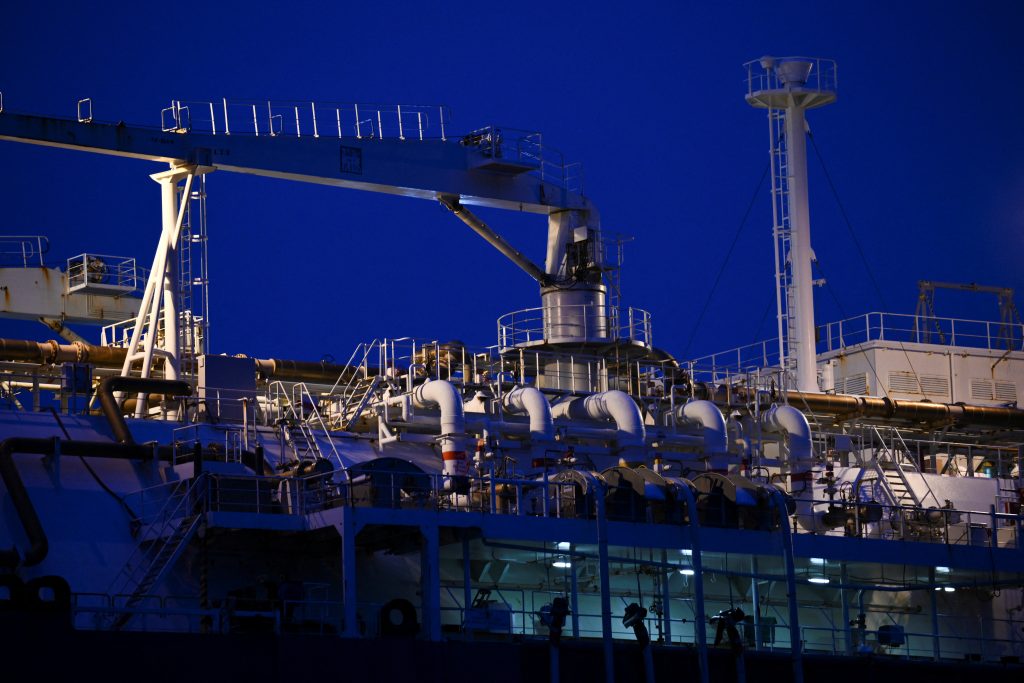 If the world gets lucky, this could be the year fossil fuel producers and climate activists bury their hatchets and join hands to reduce emissions and ensure our planet’s future.

If that sounds hopelessly Utopian, take that up with the leaders of this resource-rich, renewables-generating Middle Eastern monarchy. The United Arab Emirates is determined to inject specificity, urgency, and pragmatism into a process that often has lacked all three: the twenty-eighth convening of the United Nations Climate Change Conference, known as COP 28, from November 30 to December 12.

To kick off 2023, the oil and gas and climate communities gathered this weekend for the Atlantic Council Global Energy Forum, launching the annual Abu Dhabi Sustainability Week. After decades of mutual mistrust, there is a growing recognition that they can’t live without each other.

Thank Russian President Vladimir Putin’s criminal war in Ukraine, and his ongoing weaponization of energy, for injecting a new dose of hard-headed reality into climate conversations. It’s seldom been so clear that energy security and cleaner energy are indivisible. The guiding principle is “the energy sustainability trilemma,” defined as the need to balance energy reliability, affordability, and sustainability.

What’s contributing to this new pragmatism is a recognition by much of the climate community that the energy transition to renewables can’t be achieved without fossil fuels, so they must be made cleaner. They have come to accept that natural gas, in particular liquified natural gas (LNG), with half the emissions footprint of coal, provides a powerful bridging fuel.

Once derided by green activists, nuclear power is also winning over new fans—particularly when it comes to the small, modular plants where there are fewer concerns over safety and weapons proliferation.

For their part, almost all major oil and gas producers, who once viewed climate activists with disdain, now embrace the reality of climate science and are investing billions of dollars in renewables and efforts to make their fossil fuels cleaner.

“Every serious hydrocarbon producer knows the future, in a world of declining use of fossil fuels, is to be low cost, low risk, and low carbon,” said David Goldwyn, the former State Department special envoy for energy. “The only way to ensure we do this is to have industry at the table.”

Nowhere is this shift among climate activists more evident than in Germany, where Vice Chancellor Robert Habeck, the Green Party leader, is serving as the pragmatist-in-chief.

Habeck, who serves as federal minister for economic affairs and climate action, has been the driving force behind extending the life of the country’s three nuclear plants through April and in launching Germany’s first LNG import terminal in December, with as many as five more to follow.

“I am ultimately responsible for the security of the German energy system,” Habeck told Financial Times reporter Guy Chazan in a sweeping profile of the German politician. “So, the buck stops with me. … I became minister to make tough decisions, not to be Germany’s most popular politician.”

Some climate activists were aghast this Thursday when the UAE named Sultan Al Jaber, the CEO of the Abu Dhabi National Oil Company (ADNOC), as president of this year’s COP28.

“This appointment goes beyond putting the fox in charge of the henhouse,” said Teresa Anderson of ActionAid, a development charity. “Like last year’s summit, we’re increasingly seeing fossil fuel interests taking control of the process and shaping it to meet their own needs.”

What that overlooks is that Al Jaber’s rich background in both renewables and fossil fuels makes him an ideal choice at a time when efforts to address climate change have been far too slow, lacking the inclusivity to produce more transformative results.

Al Jaber is CEO of the world’s fourteenth largest oil producer, but he at the same time was the founding CEO of Masdar, one of the world’s largest renewables investors, where he remains chairman. He also represents a country that despite its resource riches has become a major nuclear power producer, was the first Middle East country to join the Paris Climate Agreement, and was the first Middle East country to set out a roadmap to net-zero emissions by 2050.

Over the past fifteen years, the UAE has invested forty billion dollars in renewable energy and clean tech globally. In November it signed a partnership with the United States to invest an additional one hundred billion dollars in clean energy. Some 70 percent of the UAE economy is generated outside the oil and gas sector, making it an exception among major producing countries in its diversification.

Sheikh Mohamed bin Zayed al Nahyan, president of the United Arab Emirates, has explained his country’s approach this way: “There will be a time, fifty years from now, when we load the last barrel of oil aboard the ship. The question is… are we going to feel sad? If our investment today is right, I think—dear brothers and sisters—we will celebrate that moment.”

“We are way off track,” said Al Jaber.

“The world is playing catch-up when it comes to the key Paris goal of holding global temperatures down to 1.5 degrees,” he said. “And the hard reality is that in order to achieve this goal, global emissions must fall 43 percent by 2030. To add to that challenge, we must decrease emissions at a time of continued economic uncertainty, heightened geopolitical tensions, and increasing pressure on energy.”

He called for “transformational progress… through game-changing partnerships, solutions, and outcomes.” He said the world must triple renewable energy generation from eight terawatt hours to twenty-three and more than double low-carbon hydrogen production to 180 million tons for industrial sectors, which have the hardest carbon footprint to abate.

“We will work with the energy industry on accelerating the decarbonization, reducing methane, and expanding hydrogen,” said Al Jaber. “Let’s keep our focus on holding back emissions, not progress.”

If that sounds Utopian, let’s have more of it.

This article originally appeared on CNBC.com. Frederick Kempe’s Inflection Points will return in September after a summer pause. Special editions might appear, as warranted by events.

Frederick Kempe is president and chief executive officer of the Atlantic Council. You can follow him on Twitter @FredKempe.

In this smart piece, the FT’s Rana Foroohar warns of a China-led energy order and how that could shift the global balance of power.

“What does that mean in practice?” Foroohar asks. “For starters, a lot more oil trade will be done in renminbi. [Chinese leader] Xi [Jinping] announced that, over the next three to five years, China would not only dramatically increase imports from [Gulf] countries, but work towards all-dimensional energy co-operation.”

“This could potentially involve joint exploration and production in places such as the South China Sea, as well as investments in refineries, chemicals and plastics. Beijing’s hope is that all of it will be paid for in renminbi, on the Shanghai Petroleum and Natural Gas Exchange, as early as 2025.”

This is something any serious thinker on energy should bear in mind. Read more →

In this thought-provoking narrative, the Economist highlights the growing economic potential of the North Sea, particularly as a producer of wind power.

While the Economist acknowledges significant hurdles, from the vagaries of weather to the threat of cheaper competition in Southern Europe, it also writes that if “these problems can be overcome, the new North Sea economy’s impact on the continent will be momentous.

“As Europe’s economic epicentre moves north, so will its political one, predicts Frank Peter of Agora Energiewende, a German think-tank. Coastal Bremen, one of Germany’s poorest states, could gain clout at the expense of rich but landlocked Bavaria. At the European level, France and Germany, whose industrial might underpinned the European Coal and Steel Community, the EU’s forebear, may lose some influence to a new bloc led by Denmark, the Netherlands and, outside the EU, Britain and Norway.”  Read more →

Former Secretary of State Condoleezza Rice and former Secretary of Defense Robert Gates, two of the most perceptive international strategists out there, deliver a compelling argument for how President Joe Biden’s administration should do more for Ukraine now..

The only way to avoid Russian domination of Ukraine, they write, “is for the United States and its allies to urgently provide Ukraine with a dramatic increase in military supplies and capability — sufficient to deter a renewed Russian offensive and to enable Ukraine to push back Russian forces in the east and south. Congress has provided enough money to pay for such reinforcement; what is needed now are decisions by the United States and its allies to provide the Ukrainians the additional military equipment they need — above all, mobile armor.”

“Because there are serious logistical challenges associated with sending American Abrams heavy tanks, Germany and other allies should fill this need,” they write. “NATO members also should provide the Ukrainians with longer-range missiles, advanced drones, significant ammunition stocks (including artillery shells), more reconnaissance and surveillance capability, and other equipment. These capabilities are needed in weeks, not months.”

Don’t miss Guy Chazan’s brilliant, sweeping profile of German Vice Chancellor Robert Habeck, who oversees his country’s energy and economic policies, and his struggle as a Green politician to diversify resources away from Russia.

“As the energy crisis continued, traits that distinguished Habeck from other politicians came to the fore,” Chazan writes, reporting on Habeck’s willingness to make tough decisions. “On the day of the invasion last February, amid rounds of emergency meetings, he found time to visit Andrij Melnyk, Ukraine’s ambassador to Berlin. ‘That was the most important meeting I had since the war began,’ Melnyk told Der Spiegel, ‘because he offered real human sympathy.’ Habeck also spoke openly about the uncertainties the government faced.”

Read this for a profile of the type of leader who, understanding the importance of compromise and pragmatism, will be vital in making the energy transition a success. Read more →

This week’s must-read is a clarion call on the importance of US democracy and the dangers it faces, from Erin Baggot Carter, Brett L. Carter, and Larry Diamond.

“The health of American democracy,” they write, “is both a domestic and a national security concern. China and Russia—the United States’ principal authoritarian adversaries—have been using (and exacerbating) America’s democratic divisions and travails to gain advantage in the competition for global leadership. To regain the advantage, the United States must both repair its own democracy and reinvigorate its voice for democracy in the global arena. Democracy must go on the offensive.”

To do this, they argue, “Washington must rejoin the battle for global soft power, in a manner that reflects American values. It must transmit the truth, and in ways that engage and persuade global audiences. The goal must be not only to counter disinformation persuasively with the truth but to promote democratic values, ideas, and movements. In order to counter disinformation and report the truth that autocracies suppress, multiple credible streams of information are needed. Furthermore, they must be independent; while the U.S. government may provide material support, these outlets must operate free of editorial control. That way, they will be seen to be independent because they are.” Read more →