Could Nordic American Tankers Be a Millionaire-Maker Stock?


The global oil market is in a messy situation. Since early this year, there was an expectation that oil demand would fall as COVID-19 emerged in China. Saudi Arabia saw an opportunity to rebalance the global oil market and started an all-out production push to take market share from everyone else. Needless to say, at the time, nobody in the energy sector expected the COVID-19 outbreak to turn into a global pandemic that would bring travel and much of the world’s economy to a standstill.

As a result of the pandemic, oil demand cratered to levels we have not seen in decades, tanking prices and leaving the world awash in excess crude even as producers slashed their output. This has absolutely laid waste to many oil stocks. Even after recovering somewhat from their 2020 lows, year to date, the Energy Select Sector SPDR ETF (NYSEMKT:XLE) is down 36%, the SPDR S&P Oil & Gas Exploration & Production ETF (NYSEMKT:XOP) is down 45%, and the SPDR S&P Oil & Gas Equipment & Services ETF (NYSEMKT:XES) is down 63%. Meanwhile, the S&P 500 is off by about 8.7%. 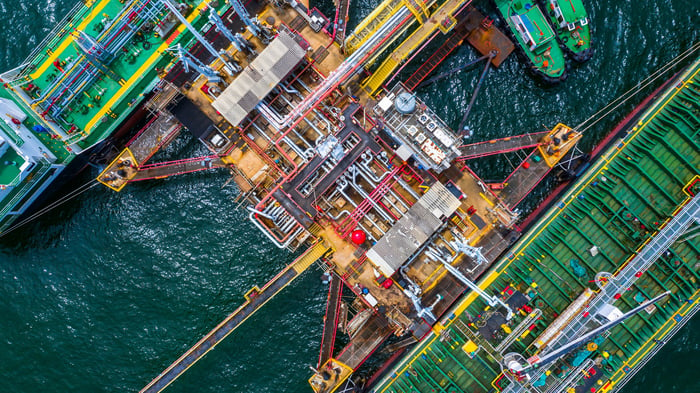 Yet amid all this devastation, oil tanker companies like Nordic American Tankers (NYSE:NAT) were given a golden opportunity. Even as the market to transport oil was collapsing along with demand, the massive — and growing — crude glut has quickly filled onshore storage facilities to capacity. The result has been a massive surge in demand for vessels to act as floating storage.

Nordic American operates a fleet of 23 Suezmax vessels, each capable of carrying up to 1 million barrels of crude oil. The vessels are about 12 years old on average; 10 were built after 2009, and 13 were built between 2000 and 2009. While they are smaller than supertankers, which can carry 2 million barrels of crude, these smaller ships offer some advantages in terms flexibility, in that they can go places those larger ships can’t.

Under normal conditions, Nordic American makes its money by moving crude oil from where it is produced to where it will be refined. The charters for its vessels are measured in day rates, and business is particularly good right now. In the first quarter, Nordic American said the average time charter equivalent it earned was $44,100 per day per ship, up almost 40% from $31,700 in the fourth quarter of 2019. That’s also substantially higher than the approximately $8,000 per day it costs the company to operate one of those vessels.

As a result, Nordic American earned $39.5 million in the first quarter, or $0.27 per share. That was up sevenfold from last year, and more than triple what it earned in the last quarter of 2019.

Business is booming (for now)

Day rates for ships continue to go up as global oil production continues to exceed both demand and onshore storage capacity. As of May 18 when Nordic American reported its first-quarter results, the company had already booked 75% of the available trading days — time not already contracted — for the second quarter, at an average of $50,000 per day per ship. That’s 13.4% higher than it was earning in the first quarter.

Given the serious supply/demand imbalance in the oil market, Nordic American and its peers are likely to enjoy higher rates and strong demand for their ships for much of 2020 — and much of it for use as floating storage.

Nordic American management says its dividend is a priority, and has paid one every quarter since 1997, though the amount has fluctuated based on market conditions: 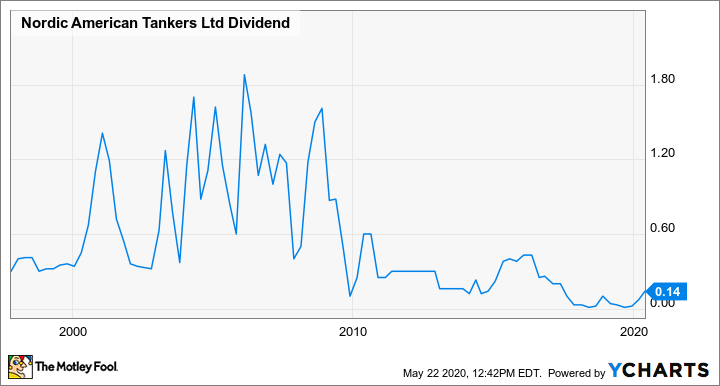 Right now, companies in the oil tanker business are riding a huge wave of excess crude and a relatively tight supply of vessels. For a company like Nordic American that operates primarily in the spot market — as opposed to signing long-term agreements — that should mean a very profitable year ahead. As a result, shareholders will continue to be rewarded through the company’s primary method of returning value to them: dividends.

The board recently approved a $0.20 per share dividend for the second quarter, a 42% increase from the first-quarter dividend. But  Nordic American’s payout history clearly reflects how supply-and-demand changes in the spot market lead to fluctuations in the demand for its services.

And looking ahead, the tides could turn relatively quickly for Nordic — 16 net new Suezmax tankers are on track to be added to global fleets by year’s end, and another 21 will hit the water in 2021. (Another nine more should float in 2022.)

Nordic American’s two-decade-plus track record of creating investor value is spotty. Since it began trading on U.S. exchanges in 1997, it has climbed to a peak of nearly triple its debut price, but has since dropped back to almost 76% below it. Still, the dividend has done some heavy lifting, generating total returns of 175% for anyone who has owned shares since 1997.

But investors who bought in during long swathes of the 21st century have seen big losses in both share price and total returns due to the volatile nature of oil supply and demand, as well as the addition of more capacity to the global tanker fleet.

So going forward, my expectation that this tiger won’t change its spots. The company will continue to focus on the spot market, which will result in big profits when conditions are tight, and thinner results when the supply/demand balance shifts. And since the company prioritizes paying out the bulk of its profits during both good and bad times in dividends, its share price will likely continue to swing up and down, rather than generating the sustained capital appreciation it takes to turn a stock into a millionaire-maker investment.

Can Exxon Bounce Back From A Disasterous 2020?

Cooking gas price hiked by Rs11.50 per cylinder as India starts to lose advantage of