Investors and policy-makers await US inflation numbers this week. But the market is front-running their worry, hitting multi-month highs from the combination of a European ban on Russian supply, China’s lifting of COVID restrictions, strong and an ill-timed Saudi hike in the selling price of its crude. 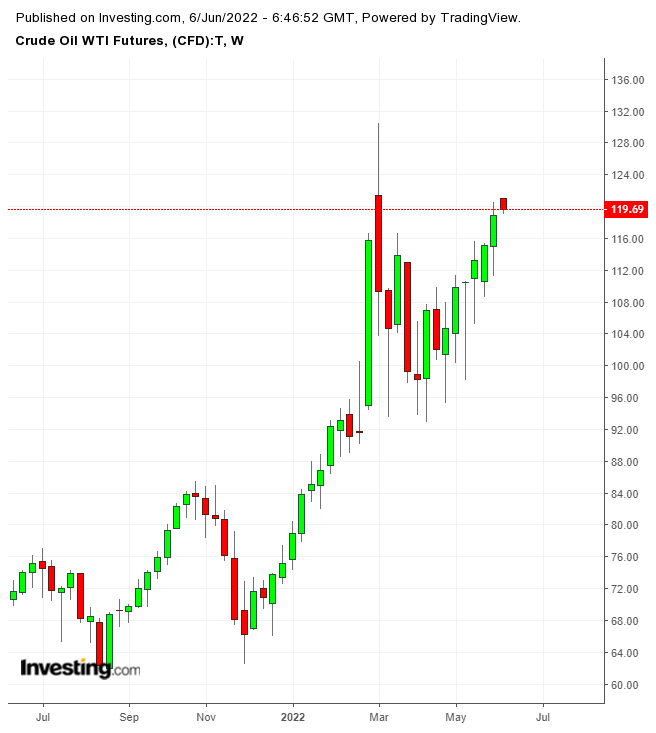 The May reading for the , due on Friday, is being watched for further signs of consolidation after its 8.3% growth for the year to April.

But even before the data, worries about inflation are piercing the roof again as crude prices cross $120 a barrel, a level last reached in early March, after the invasion of Ukraine triggered the West’s sanctions against Russian oil and 40-year highs in the CPI.

Saudi Arabia raised the official selling price (OSP) for its flagship Arab light crude to Asia to a $6.50 premium versus the average of the Oman and Dubai benchmarks, from a $4.40 premium in June, state oil producer Aramco (TADAWUL:) said on Sunday.

The July OSP is the highest since May, when prices hit all-time highs due to worries of disruption in supplies from Russia amid sanctions over its invasion of Ukraine.

The price hike came despite a decision last week by the Organization of the Petroleum Exporting Countries and allies, together called OPEC+, to increase output in July and August by 648,000 barrels per day, or 50% more than previously planned.

said on Friday it plans to raise output to 4.58 million bpd in July.

Oil producers are “making hay while the sun shines,” Avtar Sandu, manager of commodities at Phillip Futures in Singapore said in comments carried by Reuters.

Sandu added that summer driving demand and a resilient jobs market in the United States, along with the easing of COVID lockdowns in China, were adding to oil’s upside hype.

The only bearish element in oil, if there appeared to be one, was news that Italy’s Eni (BIT:) and Spain’s Repsol (BME:) could begin shipping Venezuelan oil to Europe as soon as next month to make up for Russian crude.

The shipments would resume oil-for-debt swaps halted two years ago when Washington stepped up sanctions on Venezuela.

However, the volume that the companies will receive is not expected to be large, those familiar with the deal told Reuters.

“Whichever way you look at it though, both Brent and WTI prices are nearing post-Ukraine highs, stripping at the days of the initial hostilities themselves,” said Jeffrey Halley, who oversees Asia-Pacific research for online trading platform OANDA, said in a note emailed to Investing.com.

“Returning Venezuelan and Libyan production to Europe and North America, should it occur, will not be material enough in the shorter term to force prices lower. Refining margins globally suggest that demand for petrol and diesel remain in heavy demand, with the refining logjam in refined products backstopping crude prices.”

Oil has entered the seventh month of a bullish rally, rising with six weeks of consistent positive closes and $130 as the next target, says Sunil Kumar Dixit, chief technical strategist at skcharting.com.

“The just-ended week’s long price action has further established strong bullish momentum that targets a retest of the $123 – $124.50 and $127 levels before retest of $130 if the rally gets adequate volume support.”

“Going into the week ahead, $115 will act as support. But weakness below $111 will put the brakes on the rally and momentum will turn into correction at that point, exposing oil to $100 and below.” 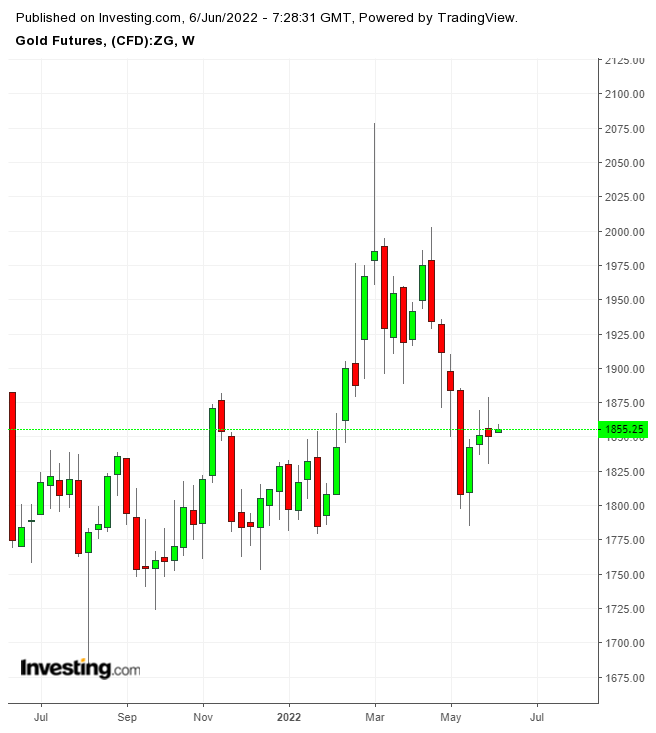 remained range-bound on Monday, holding in $1,850-an-ounce territory while analysts forecast a downside in the coming days from the Federal Reserve’s impending rate hike on June 15.

Dixit, the technical strategist, said the benchmark gold contract was at an inflection point and could go to $1,800 or even scale $1,900.

Disclaimer: Barani Krishnan uses a range of views outside his own to bring diversity to his analysis of any market. For neutrality, he sometimes presents contrarian views and market variables. He does not hold positions in the commodities and securities he writes about.

All new passenger cars will be electric by 2040

Trump returns to Washington; Biden on the cusp of some wins