Century-old, creosote-soaked timbers could burn for weeks under New Westminster


The fire that engulfed a swath of Westminster Pier Park in New Westminster, B.C., late Sunday could keep burning for weeks, according to the city’s fire chief.

“It’s just going to be a long slow process and it’s still very much an active fire scene, as you can appreciate,” said Tim Armstrong. “We have a three-acre site fully involved under the timber wharf structure — that’s the old section of wharf, approximately 100 years old.”

Firefighters are now working to pry the surface planks off the creosote-infused pilings underneath, to get to the heart of the flames eating at the showcase attraction on the city’s waterfront.

Tuesday, a heat-imaging drone flew overhead to pinpoint the fire’s location and where it is traveling to, said Armstrong.

Dr. Aamir Bharmal, Fraser Health medical health officer, said poor air quality caused by wildfires in the U.S., has been made worse by the wharf fire.

“There’s an index that we use to assess air quality and at this point it really is off the charts … and this fire has added insult to injury,” he said.

Bharmal says people living in the area of the wharf should limit the amount of time they spend outdoors. While indoors  they should keep windows and doors closed, he said.

An air quality advisory is in effect in New Westminster and surrounding areas.

New Westminster police’s major crime unit continues to investigate how the fire started but have yet to get access to the active fire scene because of the danger. They are checking closed circuit video and canvassing for clues about what could have lit the flames.

The massive fire has destroyed one of the oldest parts of the long-standing pier, which had been incorporated into the new park that opened in 2012. The attraction included an urban beach where people could play volleyball, lounge in hammocks, walk the 600 metre-long boardwalk.

The Wow Westminster installation — a huge piece of public art comprising four shipping containers shaped into a “W” — was heavily damaged in the fire.

WATCH | Video of Sunday night’s fire that destroyed a stretch of the pier: 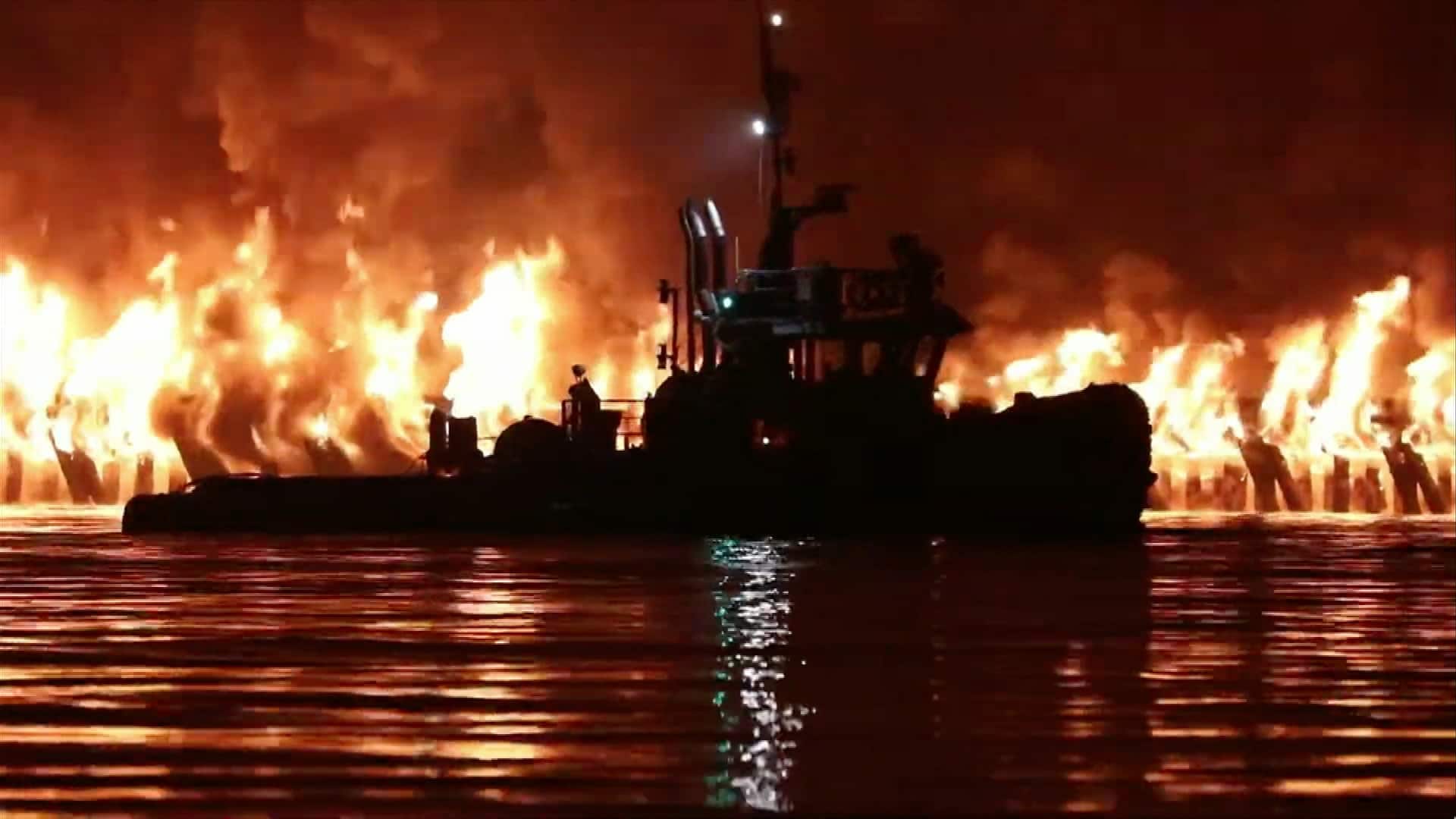 A massive fire tore through Westminster Pier Park in New Westminster, B.C., on Sept. 13, 2020. The city’s mayor said the old section of the promenade, cherished by locals and favoured by tourists, was likely completely destroyed. 1:01

The loss of the park is evoking sadness from some residents, like Mayor Jonathan Cote, who often used the park with his family.

He said he hopes the fire will be put out late Tuesday or Wednesday, but says the process of getting to the flames under the old deck is “difficult.”

It’s also dangerous, others add, given the smoke being released by the creosote-soaked pilings.

“You could just taste it in the air,” said James Crosty, a former New Westminster mayoral candidate who was never a fan of the redevelopment on what he described as “an old derelict pier.”

Crosty said fire safety concerns were no secret during construction of the $33-million park project.

In the past, homeless people have lit fires under the pier to stay warm, he said.

“That thing is going to burn for days. Creosote doesn’t get put out overnight.”

The fire did not reach the newer part of the park, which was built on pilings made of steel instead of century-old timber.

Crosty said that’s fortunate because it’s the location of a “big toxic blob” that was contained in concrete during the park’s construction. “That’s sitting underneath all of this water area that’s been redeveloped,” he said.

The city confirmed that during construction of the park it did have to remediate toxic soil and contain a “dense, nonaqueous phase liquid” that tested positive for chlorinated solvents from the shore, which has seen industrial use since the late-1800s.

On Monday, three nearby schools were closed because of the smoke billowing from the fire.

By Tuesday, services including libraries and community centres, as well as the provincial court registry, had closed due to the smoke, but all schools had reopened. Front Street remains closed to traffic, and many downtown businesses are also closed.

The pier is not entirely destroyed, but Fire Chief Tim Armstrong says it will not be salvageable.

“[The fire is] still going. It’s just really difficult to get to,” Armstrong said on Monday, when he estimated it may take several days to douse this fire.

“The access is the tough part. We can’t put crews safely on top of it.”

Helicopters were unable to fly Monday due to the poor air quality, with smoke wafting from Washington state wildfires choking the local skies.

Anyone with information about the fire is asked to call investigators with the major crime unit at 604-525-5411.

Nicolas Maduro Tempts West With an Abundance of Oil and Gas, Venezuelan President

Oil futures climbed on Tuesday, with prices finding support a day after settling at their lowest price since January, as...

Nicolas Maduro Tempts West With an Abundance of Oil and Gas, Venezuelan President

Amid the economic rumblings across the world and the energy crisis in Europe, Venezuelan president Nicolas Maduro has said his...

A Deeper Dive Into Energy Performance