Trade Minister Mary Ng said in an interview this week she is focusing her efforts with the new Biden administration on mutual U.S.-Canada interests despite early policy hiccups that risk further fracturing ties between the two nations, whose commercial relationship is worth $725 billion a year.

The rocky start began when President Joe Biden canceled permits for the Keystone XL pipeline, a move that prompted the leader of oil-rich Alberta to threaten a challenge under the old North American free-trade pact. Tensions grew when the new administration strengthened “Buy American” provisions for government procurement contracts. 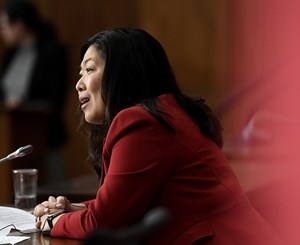 “I don’t think that getting into a trade war with the U.S. is in the best interests of Canadian workers or the energy sector,” Ng said Wednesday. “What we’ve got to do is find that common ground where Canadian interests are viewed and seen as American interests as well.”

The trade minister’s comments highlight Trudeau’s decision to sidestep flashpoints with Biden and instead channel energy into goals such as fighting climate change and fostering an economic recovery.

The two countries exchanged almost $2 billion in goods and services every day in 2019. Their economies are so integrated that the average automobile manufactured in North America crosses the U.S.-Canada border seven times before being sold, Ng said.

Biden’s “Buy American” rules are intended to boost the U.S. economy by pushing federal agencies to source goods and services from domestic businesses. The government spends nearly $600 billion annually on such contracts.

“Canadian contributions — our business contributions, our exporter contributions — into those supply chains and value chains are absolutely important to American workers and American businesses,” Ng said when pressed on how the government will push back against the president’s plan.

A key part of Trudeau’s strategy is to convince the president that protectionism will hurt U.S. businesses that rely on Canadian products.

“It’s the outcome that’s the important thing here,” Ng said. “The outcome is that Canadian businesses and Canadian workers aren’t impacted and that we continue to have access to that market, that our supply chains don’t get disrupted.”

The two countries are also divided on how to power North America’s green-energy transition. Trudeau tried unsuccessfully to convince the new administration that Canadian crude is a cleaner option due to his government’s carbon tax and stringent environmental regulations.

Biden’s move, however, is part of a bigger reshaping of perceptions in Washington around the energy relationship with Canada. For decades, energy security was seen as a continental affair, with Canadian oil producers enjoying market access while the U.S. gained security of supply.

But the boom in shale oil production in recent years has made Canadian energy dispensable. That’s going to be a major problem for a country that relies heavily on crude exports to the U.S. for its prosperity.

Canada has shipped C$838 billion worth of oil and gas to the U.S. over the past decade, representing 16% of total exports to all countries.

Trudeau’s government is toying with new trade strategies that focus less on selling commodities and more on tapping the global market for other goods, particularly consumer related. The opportunities afforded by electronic commerce — particularly for smaller businesses — is one area that officials like to highlight.

It’s an emphasis for Trudeau that was made explicit in 2019 when the prime minister — upon naming Ng to the job — rebranded the cabinet post as Minister of Small Business, Export Promotion and International Trade.

The focus on “small” isn’t lost on Ng, an immigrant from Hong Kong who moved to Toronto with her parents at age seven. In the interview, she highlighted how she spent her childhood working in her parents’ restaurant and keeps a picture of its menu in her office.

Nor has the pandemic slowed her efforts to promote the nation’s exporters: Ng has made virtual trade missions central to her work. “I’m not going to let Covid-19 stop me from helping businesses do business,” she said.

But there’s no denying Covid has hit the nation’s trade sector hard. Exports fell by 12% in 2020, Ng’s first year on the job, one of the biggest annual drops in the past century.

The other potential remedy for Canada’s export troubles is China, but relations with the Asian giant soured sharply after the 2018 arrest of a top Huawei Technologies Co. executive on a U.S. extradition request. China subsequently locked up two Canadians and halted billions in agricultural imports.

“I don’t believe the conditions are there right now for trade discussions,” Ng said when asked about China. “The government’s priority is on working on securing the release of Michael Kovrig and Michael Spavor.”

Iran warns US not to interfere with Venezuela oil shipment

Iran warns US not to interfere with Venezuela oil shipment