Over the last few years, investors in the oil and gas industry have pivoted from acquiring land and growing production to seeking companies that can maintain production while living within their cash flow. The shift in emphasis is the consequence of the poor drilling returns that many companies experienced (much of which was significantly debt-funded),
the related deterioration of the M&A market for undeveloped assets and a desire of investors to enforce greater capital discipline.

The search for free cash flow positivity is a bit like what upstream master limited partnerships (MLPs) tried to do several years ago. Their goal was to continuously acquire and develop properties while living within free cash flow and distribute excess cash to their investors. Growth capital came from new debt and equity raises, and as long as the cash flow of the portfolio was sufficient to pay the interest on the debt, make distributions on the equity and reinvest in the business to hold production flat, the model was sound.

In the MLP vernacular, the reinvestment needed to hold production flat was called “maintenance capital”; it was either spent immediately or set aside for future maintenance activities.

MLPs ultimately passed out of favor for several reasons. At the time, however, the difficulty of managing a successful MLP that was heavily weighted to unconventional assets was clear because unconventional wells have a very high initial decline rate that must be filled by additional drilling. If the maintenance drilling did not generate sufficiently high returns, it would consume too much of the company’s operating cash
flow and not leave enough for planned distributions. Failure to maintain distributions, allowing production to decline, or borrowing to make distributions were events that could cause the unit price of an MLP to drop and make it hard to raise capital to keep the business growing.

Today, after chasing growth for several years, upstream investors are seeking companies that can maintain or grow their production and simultaneously generate sufficient free cash to pay dividends. It sounds a lot like what MLP investors were seeking (minus MLP’s favorable tax
treatment), but they’re chasing these opportunities in a different environment — one where unconventional assets dominate the domestic production landscape.

“Today, after chasing growth for several years, upstream investors are seeking companies that can maintain or grow their production and simultaneously generate sufficient free cash to pay dividends.”

This raises the question about how likely it is for a company to maintain stable or growing production while generating free cash, and what sort of company and maintenance investment attributes are necessary to do so.
To investigate, Ralph E. Davis Associates created a simple free cash flow model that allows inputs that describe the existing company (base production forecast, future prices, operating costs, administrative expenses, etc.) and a type curve that describes the average of the company’s drilling
opportunities.

The model determines the number and type of wells drilled to hold production flat, and the resulting total free cash flow is an output. The model is not as complex as a typical corporate model, but it is a useful tool for getting a general idea of what is needed to achieve the free cash flow goal under certain conditions. Income taxes are excluded.

Of course, an unlimited number of cases could be run, but here is an example to illustrate the types of conclusions that can be drawn.

As an example, we assume an operator of unconventional wells making 10,000 barrels of oil per day with a modest gas-oil ratio. Because the company is fairly new and its wells are young, production is still declining rapidly. We assumed the base production has an initial 35% effective annual decline with a b-factor of 0.5. Other operating assumptions are shown in Table 1, and we assumed flat pricing. Overhead is set at 10% of revenue, which does not represent top performance, but is probably not uncommon for small to midsized companies. The company’s debt level is set to keep its leverage ratio (debt-to-EBITDA) around 2.5. 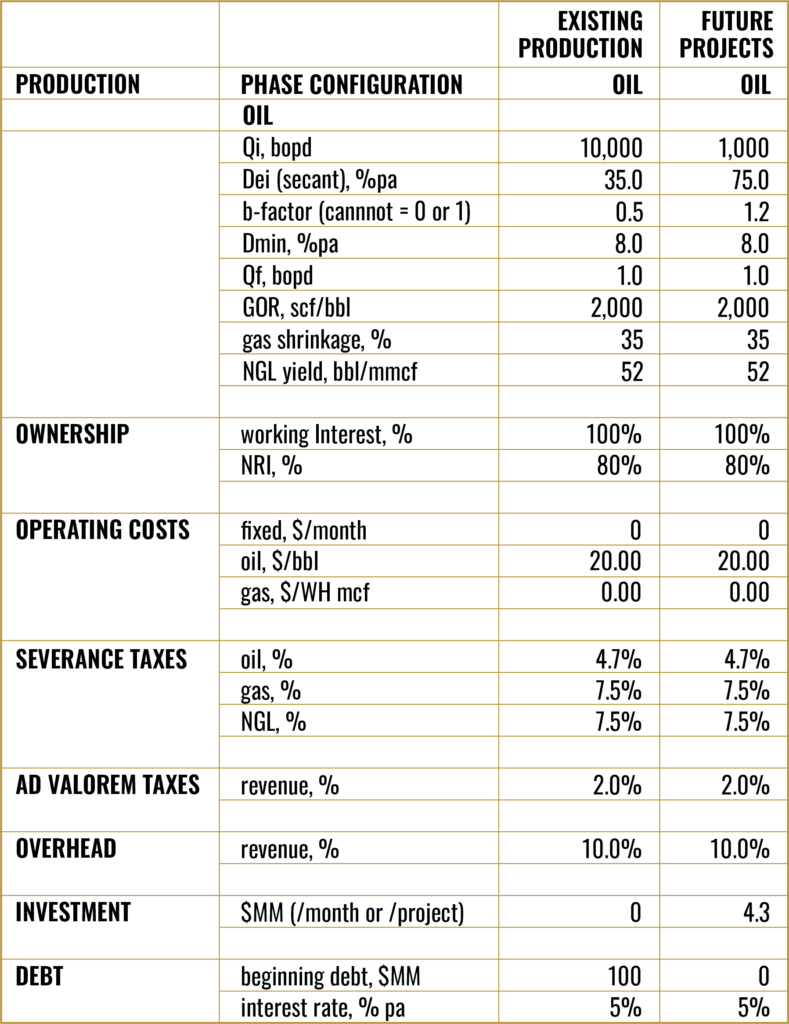 The company has several drilling opportunities in the same area as its existing wells. We assume a typical set of decline curve parameters (1,000 bopd, initial decline of 75%, and b-factor of 1.2) and slightly better-operating costs to reflect economies of scale. By adjusting the capital cost of this typical well, we can see when net cash flow stabilizes at or slightly above zero and determine what rate of return is needed from the drilling projects to generate excess free cash flow.

In this case, we iterated the capital costs to achieve zero free cash flow over the first five years (this would not generate excess cash for dividends, however). In our example, we observed that future wells would need to
deliver a minimum 21% rate of return. If the company’s base initial decline is increased to 40%, the required rate of return climbs to 26%. 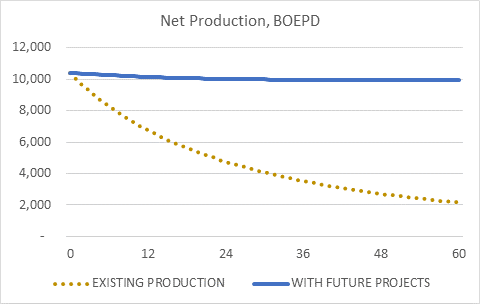 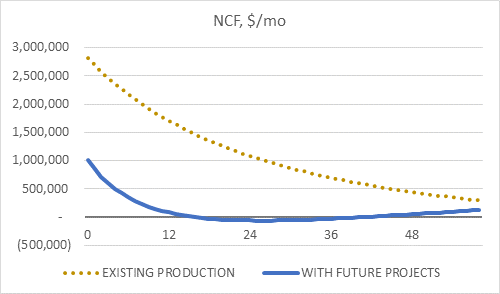 Of course, these are point-forward economics and do not include the costs of acquiring the leasehold. If we assume our type well requires 320 acres and land acquisition costs of $2,500/acre, then the returns from drilling need to cover this $800,000 cost. Using our previous assumptions and the 35% initial decline case, the new wells would need to generate a 37% rate of return.

This example may help explain why the market for undeveloped assets is currently soft. Investors are seeking assets that can deliver stable production without continually adding capital, and given current low commodity prices, there are relatively few opportunities that deliver the types of returns needed to offset production declines. It is difficult to pay much for the option to drill if the returns to drilling are not high enough
to meet investor expectations.

Despite the difficulties, however, we expect that operators will strive to deliver what investors are seeking. The steps they are likely to take include consolidation to gain synergies and focus on the highest-returning projects, operating cost reductions to generate additional cash flow, and increased capital discipline to avoid low-return investments.

Watching out for whales: Australian tech gives new eyes to ships – News – The

Why Gasoline Prices Can Stay Up When Oil Goes Down