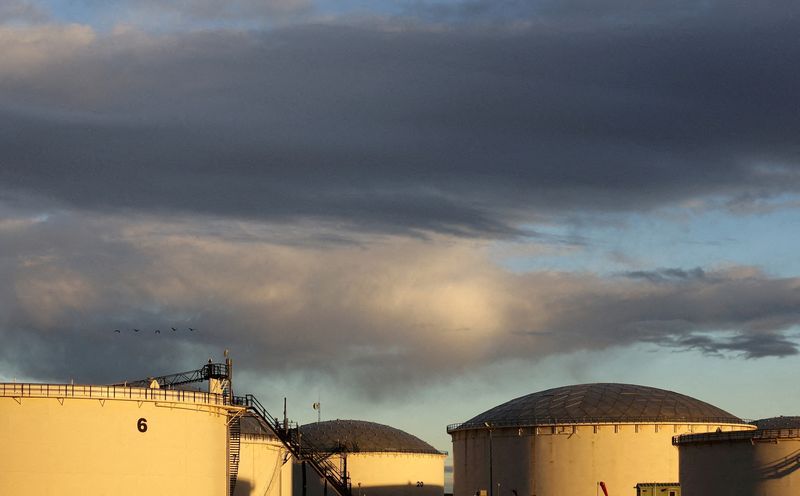 HOUSTON (Reuters) -Brent crude prices were little changed in choppy trading on Friday after the European Union said it would allow Russian state-owned companies to ship oil to third countries under an adjustment of sanctions agreed by member states this week.

Russian state-owned companies Rosneft and Gazprom (MCX:) will be able to ship oil to third countries in a bid to limit the risks to global energy security.

Under tweaks to sanctions on Russia that came into force on Friday payments related to purchases of Russian seaborne by EU companies would not be banned.

“Short term that definitely is a negative headline that probably gave us a little bit of a sell off here,” said Phil Flynn, an analyst at Price Futures group.

The EU announcement comes after Russian Central Bank Governor Elvira Nabiullina said it will not supply crude to countries that decide to impose a price cap on its oil and instead redirect it to countries which are ready to “cooperate” with Russia.

“Perceptions are growing that the U.S. and EU will implement price caps on Russian oil by year end,” said Dennis Kissler, senior vice president of trading at BOK Financial.

“Past history shows that government-induced price caps on commodities are usually short lived and can result in exaggerated prices soon after,” he added.

WTI was on track to close lower for the third straight week, pummelled over the past two sessions after data showed that U.S. gasoline demand had dropped nearly 8% from a year earlier in the midst of the peak summer driving season, hit by record prices at the pump.

In contrast, signs of strong demand in Asia propped up the Brent benchmark, putting it on course for its first weekly gain in six weeks.

Demand in India for gasoline and distillate fuels rose to record highs in June, despite higher prices, with total refined product consumption running at 18% more than a year ago and Indian refineries operating near their busiest levels ever, RBC analysts said.

Prices, however, were held back by worries of interest rate hikes that could slash demand and the resumption of some Libyan crude oil output.

Libya’s oil production is at more than 800,000 barrels per day (bpd) and will reach 1.2 million bpd by next month, the Libyan oil ministry said.

Iraq has the capacity to increase its oil production by 200,000 bpd this year if asked, an executive of Iraq’s Basra Oil Co said.

The global economy looks increasingly likely to be heading into a serious slowdown, just as central banks aggressively reverse ultra-loose monetary policy adopted during the pandemic to support growth, data showed on Friday.

Recent moves in crude oil and interest rate futures anticipate a downturn in the business cycle that will cause oil consumption to dip before the end of the end of the year and into the first three months of 2023.

Investors were also watching for U.S. Federal Reserve decision on interest rates next week. Fed officials have indicated that the central bank would likely raise rates by 75 basis points at its July 26-27 meeting.

© Reuters. By Barani Krishnan Investing.com -- It was always going to come down to production cuts. And when it...

© Reuters. FILE PHOTO: The Valero St. Charles oil refinery is seen during a tour of the refinery in Norco,...

A lot has happened since I posted this XME/XLE chart three weeks ago. is slightly stronger than , with the...

OPEC moves against the US

Gulf of Mexico operators can expect an active 2020 hurricane season