The pandemic’s devastating impact on Big Oil was illustrated on Tuesday when some of the world’s biggest energy groups reported record annual losses, marking a brutal 12 months for an industry under mounting pressure to speed up a transition to cleaner fuels.

ExxonMobil, the US’s biggest oil producer, racked up losses of more than $20bn last year — the first annual loss in its history. It capped a year of crisis for the company in which it was also stripped of its place in the Dow Jones Industrial Average and shed more than 40 per cent of its market value.

“The past year presented the most challenging market conditions ExxonMobil has ever experienced,” said Darren Woods, chief executive.

Across the Atlantic, UK energy group BP announced its first annual loss since the Deepwater Horizon disaster more than a decade ago after fourth-quarter profits plunged 96 per cent.

It was a “tough quarter at the end of a tough year”, said Bernard Looney, chief executive. BP’s full-year losses reached $5.7bn, down from a $10bn profit in 2019. 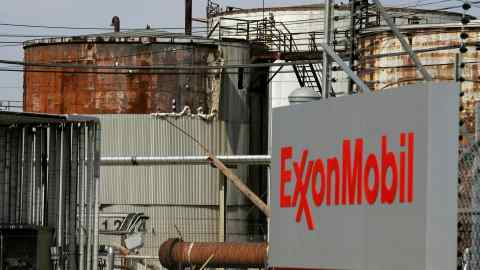 In April, US crude prices briefly traded below zero, spreading distress across the world’s oil industry. Oil producers slashed capital spending in response to the price crash with some shutting wells after demand collapsed and places to store crude rapidly filled up. In Europe, companies cut dividends, borrowed billions of dollars and announced thousands of job cuts.

In the US’s shale sector, years of fast supply growth went into reverse as a wave of bankruptcies swept through the industry and operators idled their rigs.

ConocoPhillips, one of the US’s largest independent producers, also reported worse than expected results on Tuesday, with an annual loss of $2.7bn compared with a $7.2bn profit in 2019.

On top of the devastation to oil company revenue caused by the pandemic and last year’s price crash, investors and environmental activists have also assailed the sector with demands that it step up efforts to reduce carbon emissions.

BP responded last year with a pledge to cut its long-term oil production, reduce emissions and spend heavily on renewables. Shell and Total, which are also expected to report deep annual losses when they publish their earnings in the next week, have made big climate announcements. Exxon has also pledged new targets to cut carbon emissions. But the US supermajor is facing a mounting campaign from activist investors calling for it to revamp a corporate strategy still focused on increasing crude output.

A recent oil price rally sparked by the rollout of mass vaccination programmes and hopes that the global economy will recover this year has improved the outlook for oil producers.

But operators remained cautious. Exxon and Chevron, which reportedly talked of merging during the depths of last year’s price crash, both said they would stick to reduced capex plans.

Shell-shocked by the pandemic’s devastation last year, the industry also remains cautious about a recovery.

“I think there are issues about mutations and issues about vaccine rollout . . . but, at the same time, we have vaccines so there will be a recovery,” Mr Looney told the Financial Times. “How long it will take, time will tell.”

Ukraine and Russia explained in maps and charts | Infographic News

Ukraine and Russia explained in maps and charts | Infographic News