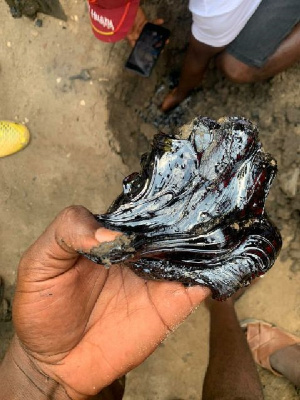 The substance suspected of being crude oil found beneath the soil

The Apremdo community in Effia Kwesimintsim Municipality in Western Region, has discovered an unknown substance beneath the soil, and suspected of being crude oil.

Although the discovery of the substance has caused anxiety in the community, the traditional ruler in the area, Nana Egya Kwamena Xl, has taken up the matter.

He says, the community would investigate and ascertain what exactly the substance could be.

Speaking in an interview with journalists, the chief explained that although the community could not readily verify the content of the strange substance, and therefore quickly had to invite experts to investigate the content.

“This is a substance coming out from the ground found inside Apremdo.
We’re taking a sample to Tema Oil Refinery (TOR) for laboratory test on Monday,” he confirmed.

The chief and his elders are hoping the substance would turn out to be a meaningful carbon resource especially crude oil or mineral resources capable of assisting in transforming the area in terms of development.

“We are anxiously waiting to see the outcome of the test we want to conduct with Tema Oil Refinery,” he noted.

There are many mineral resources in Ghana, carbon and other useful natural resources available in Western Region, therefore making this discovery an important step towards realizing the potential of communities and the Western Region.

U.S. West Texas Intermediate crude oil futures are up late in the session on Thursday but off its intraday high....

3 Ultra-High-Yielding Energy Stocks to Buy With $1,000

How Nigeria’s state lost the trust of its citizens

Ukraine accuses US and European banks over Russia links