The U.S. economy is slowly opening up in the hopes that the worst of the COVID-19 pandemic is over. Oil prices will likely remain depressed from the shockwaves of lower demand, namely from transportation and industrial use cases.

Although the headwinds facing the oil industry are far from over, here are three oil stocks to buy right now for investors that have the patience to give the industry time to recover. 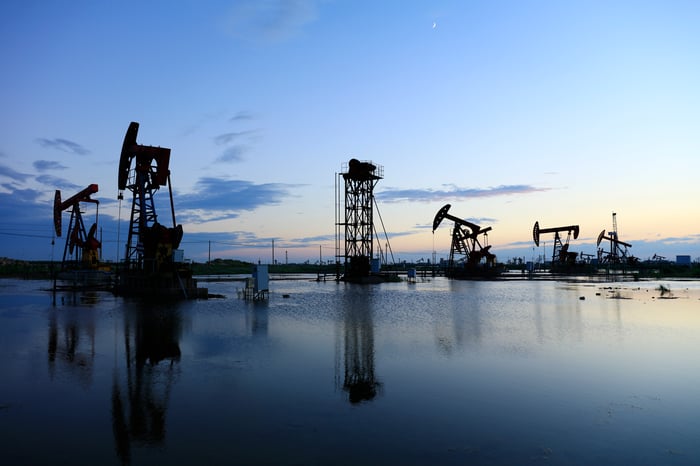 Oil continues to provide over 90% of the energy used in transportation around the world. Its use in household products, clothing, tech, and more make it a relevant part of our everyday lives, but the current oil downturn has really done a number on the industry as a whole.

With companies cutting spending or going bankrupt, supply will likely decrease in the coming year or two, which could help prices recover.

As one of the largest exploration and production (E&P) companies in the world, ConocoPhillips (NYSE:COP) is a staple in the upstream segment of oil and gas. Its financial structure and balance sheet are now arguably the best of any U.S. E&P company because ConocoPhillips mostly funds its growth with operating cash flow, all the while keeping a large amount of cash in reserve.

Meanwhile, the strategy for other E&P companies is simple: take on debt to acquire a large number of assets that, with scale, achieve a low breakeven cost per barrel. This debt-dependent strategy of other E&Ps is severely backfiring in the current low oil-price environment.

The stock’s decline has resulted in a rising dividend yield that is now 3.5%, an attractive offer for income investors. ConocoPhillips currently has a P/E ratio of 12.7 and a price-to-free cash flow (FCF) ratio of 12.2.

Royal Dutch Shell (NYSE:RDS.A) (NYSE:RDS.B) had spent the last five years increasing its free cash flow and rewarding shareholders with one of the highest dividend yields and total payments in the industry, until the company announced a historic 66% dividend cut in its recent first quarter earnings announcement. Even with the cut, Shell will still yield over 3%, but it’s certainly a setback for income investors.

Since Shell relied on high cash flow to support its dividend, the dividend cut looks to be a wise decision, assuming cash flow will fall dramatically in the coming quarters. 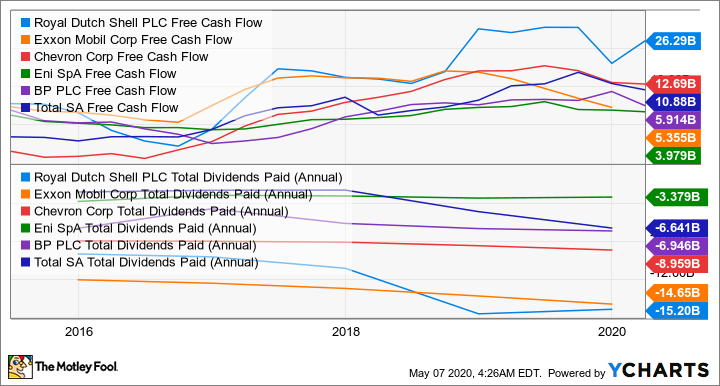 If Shell hadn’t cut its dividend, its obligation would likely have exceeded cash flow in the short term and forced the company to borrow debt. Shell also cut its 2020 spending by around $5 billion, or 20%, giving it even more dry powder to get through this crisis.

Looking past the dividend cut, Shell appears well-positioned to rebound from the present downturn.

Starting in 2018, Shell’s integrated gas business emerged as the dominant sector in the company’s portfolio, replacing downstream to make up the majority of net income in 2018 and 2019.

Shell seems to have made a wise decision to expand its gas efforts since natural gas prices haven’t fallen nearly to the extent of oil. Still, Shell’s business is under strain, but investors will be able to pick up shares at a 15% discount compared to where they were trading a week ago before the dividend cut was announced.

Unlike Shell, ExxonMobil (NYSE:XOM) mainly works within the oil and gas industry to improve its profitability and reduce its environmental footprint. Although management was arguably overly opportunistic at the start of the pandemic, the company has since announced a 30% reduction in capital expenditures and a 15% reduction in cash operating expenditures.

Exxon’s production cuts and overall exposure to the oil downturn will be a tough pill to swallow in the short term, but the company has made a commitment to paying its dividend that currently yields the most in over 10 years at around 8%. 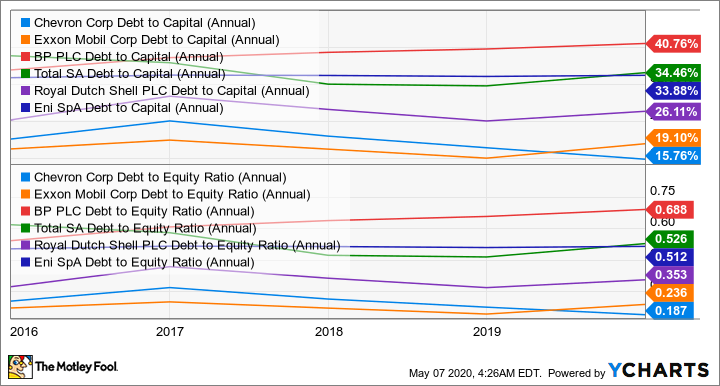 Although the company has done a good job improving its balance sheet, spending was still a concern leading into the pandemic. After its spending cut, Exxon could continue its streak as a dividend aristocrat, having raised its dividend for 37 consecutive years and not cutting its payout since 1948 (split-adjusted).

It bears repeating that investing in the oil and gas business is a risky proposition in the short term but could prove worthwhile over the medium to long term.

ConocoPhillips has spent the past five years reducing its break even cost-per-barrel while improving its balance sheet. Its financial structure and balance sheet are now arguably the best of any U.S. E&P company.

Shell, paired with Exxon’s dividend, provides a nice combo of gas, oil, and Shell’s renewable efforts, all the while still getting a solid overall dividend. Together, the average yield of the three stocks is close to 5%, but it’s a more reliable source of income than chasing after high-yielding oil and gas stocks that lack the financial discipline and deep pockets to make the risk worthwhile.

A customer refuels at a Chevron gas station with prices above $4 a gallon in Seattle, Washington, U.S., on Monday,...

Jan 23 (Reuters) - HighPeak Energy Inc, an oil-focused exploration and production company operating in the heart of the Permian...

Dow Jones futures will open Sunday evening, along with S&P 500 futures and Nasdaq futures. Investors will be looking ahead...